Calvin Boggs is a senior at Brownstown High School who will graduate this Sunday.

Calvin is the son of Mike and Lynn Boggs. He has a brother, Amos, and a sister, Becky. He is very courteous, and speaks quietly, but clearly and sincerely.
The 18-year-old has been a member of the American Boy Scout Program for the past eight years.
He has built a glass case on a wooden frame in which to display a large map that contains an alphabetized listing and the location of all the veterans buried in Griffith Cemetery, presenting it for display in the cemetery.
While he acknowledged building the case and stand, and researching the names and locations of the military graves, he also modestly gave others credit for their help, and he praised the Scouting program.
An attractive and helpful addition to the cemetery entrance, it is no small accomplishment on his part. It is placed near the granite Griffith Cemetery marker and the markers of the military branches, near the base of the American flag.
He likes to hang out with his friends, but is wanting to find a job now that school is ending. He has an interest in auto mechanics.
He modestly explained the veterans’ graves map and listing project.
“My brother and I put it all together and my friend, Perry Gentry, helped me dig the holes to put it in the ground,” he said.
“On last Veterans Day, we had all the American flags put out on all the veterans’ graves. I came out here (Griffith’s) with Donnie Smail and as we were picking them up, I wrote everybody’s name on a little notepad, but I didn’t put where they were, because I really didn’t know the grounds,”
“I eventually got the original maps of the cemetery and had to drive to Mattoon to get them printed off, because no one here had a big enough printer to do it. There are roughly 130 veterans buried here,” he said.
“My dad thought of the idea of this map stand, and thought I should do it,” he said.
“I gave a copy (of the list of veterans) to Donnie Smail. I color coded every veteran’s name, which took a few days.  Building the stand didn’t take any time at all,” he said. He generously gave credit to those who helped hm.
“I had the help of my brother building it, and my sister helped me with the Internet issues I had and helped me alphabetize them.”
Credits the Scouting Program
Calvin gives much credit to his years as a Boy Scout. “Boy Scouts was an amazing adventure for me,” he said.
“It taught me many things, from building a shelter to starting a fire without matches or a lighter to using a map and compass to find my way.
“I have earned my merit badges, and they have each taught me something. One of my most-favorite times was camping at Gatch Lake in an old military pup tent.  We just sat lounged around and it was a great time,” Calvin said.
“I would like to thank everybody who has ever helped me in Scouting, and, most of all, my family.” 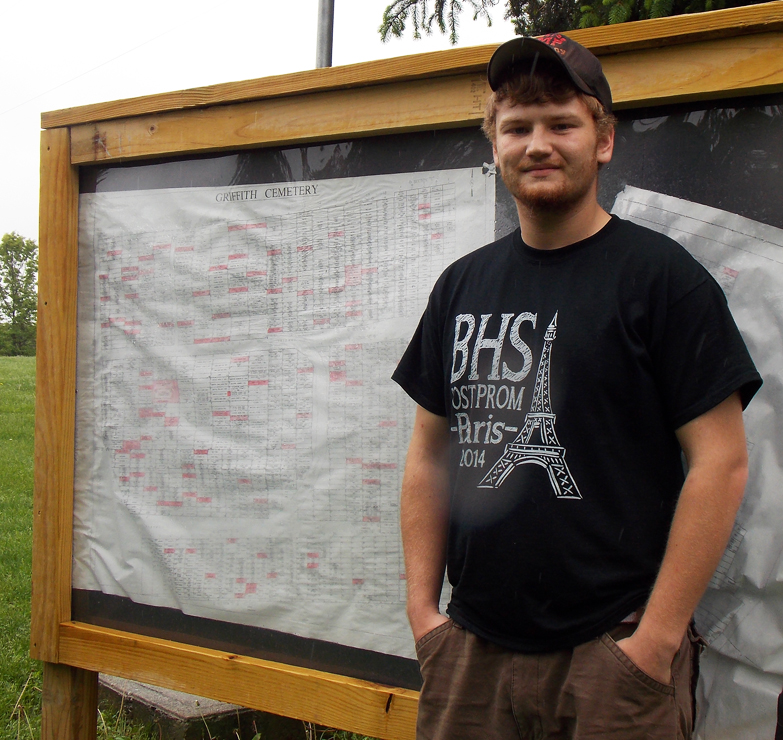