The building was erected about 1862, but as we know, the city of Vandalia was established as early as 1818 by the state governing body when this site was chosen for the state capital.
Initial land sales were held in Edwardsville, and this is where Ferdinand Ernst purchased several lots in the proposed city, with the intention of bringing a colony of immigrants from Hanover, Germany, to the virgin forest of Illinois. They arrived in December 1820.
In preparation for a book, "Vandalia, Capital of Illinois 1819-1839," published in October 1954, Joseph C. Burtschi, a licensed abstractor, researched deed records to determine where the first taverns were located.
Adding to his work, Paul Stroble completed a great deal of newspaper research for his book, "High On The Okaw’s Western Bank," and in 1986 submitted an article titled, "Businesses and Establishments in Vandalia 1819-1840," for publication in "Fayette Facts."
Studying ads and legal notices, Paul documented names of many taverns and their keepers, along with their location. He names Charles Reavis as having the first known business in Vandalia. His tavern occupied the corner of Fifth and Johnson streets near the first capitol building.
In these early days, a tavern was where you could find a place to sleep while an inn or grocery was where you could find a dram of whiskey.
In the fall of 1819, Frederick Hollman completed  the two-story, 24-foot by 35-foot Union Hall and, when the first legislators made their way through the dense forests from Kaskaskia to the newly platted capital, they were surprised and pleased to find lodging available.
Among Vandalia’s first taverns were Traveller’s Hall built by Daniel Bathrick and licensed in October 1820, and the Eagle Tavern, established in 1821. John Baugh kept a double-log cabin boarding house very early, and in 1822, E.M. Townsend advertised that his tavern had 13 lodging rooms and a 44-foot by 20-foot dining room. Townsend’s Tavern was located on the southeast corner of Kennedy and Gallatin streets.
Several taverns followed old English titles such as Sign of the Bell, Sign of the Golden Eagle and Sign of George of Washington on the corner of Fifth and Johnson, which later became the Columbian Hotel. It was built by Thomas Cox, one of the commissioners who chose Vandalia as the site for the new capital.
Lemuel Lee, who also built the first mill on the Kaskaskia River at Vandalia, operated the Sign of the Globe on Gallatin Street between Third and Fourth streets, and Abraham Lincoln is known to have boarded there. Some of Vandalia’s Lincoln stories were told by his children.
Lincoln also stayed at Charter’s Hotel on the northwest corner of Gallatin and Fourth streets, the Union Hotel on the north side of Gallatin Street in the 400 block and a rooming house that stood at 615 W. Johnson St. This little house was torn down with the expansion of the First Baptist Church.
Matthew Duncan was a hotel keeper in 1830 on the southeast corner of Fourth and Gallatin, the site of Something Special Florist, and along with 13 boarders he had eight slaves of varying ages, while The Flack House, with proprietor Abner Flack, anchored the corner where Allen’s Furniture Store stands today.
The Flack House, in which Abraham Lincoln made his social debut, was moved about 1857 to the corner of Fifth and Johnson streets to make way for the Star Store.  Having served as a tavern and later a boarding house, it was demolished in the 1960s to  make way for the city parking lot.
Charles A. Evans commissioned Mathew Heller to paint a mural depicting capital-era Vandalia for the dining room of his five-story hotel, Hotel Evans. Using research from Joseph Burtschi, along with extant photographs, the mural was unveiled in October 1954. It was lost in the March 3, 1969, fire which also destroyed the hotel.
Since that time, Vandalia artist, Lorraine White, recreated the Heller mural for the Fayette County Museum. Here, visitors can see an accurate depiction of the Vandalia that Lincoln would have seen while serving as a member of the legislature from 1834-1839. 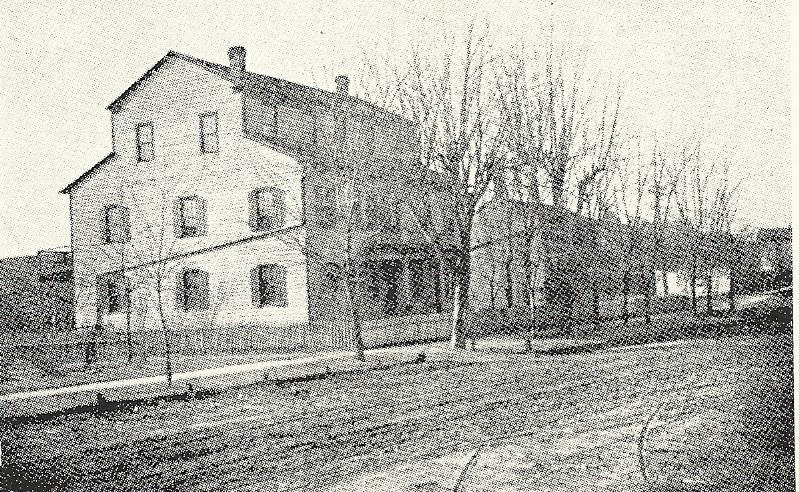 Shown above is the Flack House, after it was moved to the corner of Fifth and Johnson streets. The building to the right is the Columbian Hotel, built in 1822 and operated by Frederick Hollman and Frederick Stolle.