Two road projects – one about to get underway and one that’s badly needed – were discussed at Monday’s Vandalia City Council meeting.

Noting that the Illinois Department of Transportation has been doing survey work on the Veterans Avenue railroad overpass, Mayor Rick Gottman said work on the overpass will begin on Monday, May 19.
Gottman said the work will include grading down the roadway and resurfacing Veterans Avenue on the overpass.
Also discussed was the closure of a section of Thrill Hill Road from U.S. Route 51 to Zent Drive atop Thrill Hill.
Public Works Director John Moyer said that after a hole was discovered in the eastbound lane of a bridge in that section, he took a closer look at the bridge.
“There’s nothing left underneath,” Moyer said, explaining that pilings, ring wall and retaining wall were gone.
“It will be closed indefinitely, and I can’t fix it,” he said.
Gottman said that section of Thrill Hill Road , a city road, will be closed until adequate repairs can be made.
He directed Rodney Potts of John Crawford and Associates Engineers to inspect the bridge and do the work necessary to bid out the project.
Also at Monday’s meeting:
• The council approved memorandums of understanding that provide pay increases for two groups of city employees.
The memorandums update the contracts with Fraternal Order of Police Lodge No. 111 and the Vandalia Police Communicators.
The only update in each contract is a 2-percent pay increase for each group in each of the next four years.
• Gottman clarified that he supports the efforts to deal with problems with the Vandalia Municipal Swimming Pool.
He said he needed to publicly state his support after there were comments to the contrary on social media.
“I am very supportive of the pool project,” Gottman said. “I just want to make sure that they look at all of their options and do their due diligence,” Gottman said.
• The council approved a Tax Increment Financing agreement with Amie LeDuc for improvements to a building she is purchasing.
The agreement provides a grant of up to $25,000 for improvements to the building south of the southwest corner of Eighth and Randolph streets, the former home of Donaldson Carpet and Johnson Electric. The improvement project is estimated at just over $74,000.
LeDuc plans to move her day care business, Bright Beginnings, to that building.
Prior to approving the TIF agreement, the council approved LeDuc’s request to change the zoning of that property from light industrial to downtown commercial.
• The council agreed to discontinue the policy of staffing the Vandalia Lake Jaycees Beach with lifeguards.
Alderman Mike Hobler, chairman of the Vandalia Lake Committee, said that the committee has been looking into that change for several years, adding that lifeguards were dropped at all state parks some time ago.
“With or without lifeguards, there’s a certain amount of liability,” Hobler said.
He said the city will post signage that stipulates that swimmers under the age of 16 must be accompanied by “a responsible adult.”
Hobler said they will keep the fence up at the beach, and that it will be unlocked from 10 a.m.-6 p.m., with lake personnel making periodic checks of the beach area.
The decision to get rid of lifeguards will save the city “a considerable amount” of money, Hobler said.
Hobler also reported that the campground area at the lake is now open.
• Gottman announced that the Vandalia Police and Fire Commission had hired Brad Ledbetter to replace Kent Emerick, a city patrolman who retired last week.
Ledbetter is a retired Illinois State Police trooper and supervisor.
• Gottman reported that applications for jobs at the Starmax Theatres are available at city hall.
He noted that the city has made job applications available for other businesses in the past, and that it will continue to do so, because of the economic boost that businesses give to the city.
• The council voted to reject a bid from Jon’s Mid-America Fire Apparatus for the volunteer fire department’s 1996 ladder truck.
A representative of the Rogersville, Mo., fire truck broker submitted the bid after inspecting the truck on April 22.
Members of the council’s public safety committee and Vandalia Volunteer Fire Department chiefs recommended not accepting the bid, believing that the truck is worth considerably more than the bid amount.
The ladder truck is being replaced with a new aerial apparatus, which is scheduled to arrive this summer.
• The council agreed to sell at auction three vehicles formerly used as police squad cars – a 1999 Ford Crown Victoria, a 2001 Crown Victoria and a 2004 Chevrolet Impala.
The city had been selling its old vehicles through an auction house in Mt. Vernon, but Gottman said that since the vehicles are purchased with local tax dollars, city taxpayers should have the right to bid on them.
• The council approved an amended TIF agreement with New Wave Communications, which includes a wording change on the businesses to benefit from New Wave’s expansion into the west Interstate 70 interchange.
In the amended agreement, New Wave clarifies that it has signed contracts with Holiday Inn Express, Statewide Tire, Midwest Tractor Sales and Starmax Theaters.
• The council observed a moment of silence for William “Dude” Swick, the grandfather of city patrol officer Rob Blackerby.
• The council was informed that the day after it approved the purchase of a water pump for the sewage treatment plant for $5,630 from Vandeventer Engineering, Montgomery Plumbing and Heating of Vandalia offered to sell the pump for $2,850.
Thus, it was purchased from the local firm.
• The council accepted the bid from Pro-Dive Inc. of Ottawa for the inspection, and possible repair, of the Vandalia Lake raw water intake.
The bid, $3,266.77, was one of two received by the city. 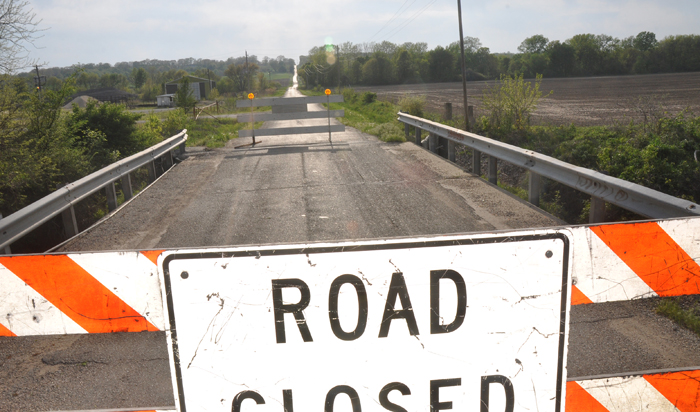 A section of Thrill Hill Road west from U.S. Route 51 is closed indefinitely due to the condition of a bridge.