I learned something new about President Abraham Lincoln last week while reading the “Historical Sketch” section of the Mt. Pulaski Times. President Lincoln held a patent.
He gave his invention the title, “A Device For Buoying Vessels Over Shoals,” for which he received Patent No. 6,469. It was recorded on May 22, 1849, in the U.S. Patent Office.
It appears that the idea for his invention came to him from personal experiences. On a trip from New Salem to New Orleans, the boat he was on slid onto a dam and was set free only after heroic efforts.
In later years, while traveling on the Great Lakes, Lincoln’s ship ran afoul of a sandbar.  These two similar experiences led Lincoln to conceive his invention.
Lincoln’s law clerk and later partner, William Herndon, reportedly told the story of the "heroic efforts" taken to save the boat.  “The captain ordered all hands to collect all the loose planks and empty barrels and force them under the sides of the boat. After forcing enough of the barrels under the vessel, it was slowly lifted and then cleared from the sand bar.”
Lincoln’s “A Device For Buoying Vessels Over Shoals,” consisted of a set of bellows attached to the hull of a ship just below the water line. On reaching a shallow place, the bellows were filled with air and the vessel, thus buoyed, was expected to float clear.
In the papers that accompanied his application for a patent, Lincoln said that he had invented “a new and improved manner of combining adjustable buoyant air chambers with a steamboat or other vessel for the purpose of enabling their draught of water to be readily lessened to enable them to pass over bars, or through shallow water, without discharging their cargoes.”
His patent drawings are on file at the U.S. Patent Office. His carved wooden model for his patent application is on display at the Smithsonian. For those who cannot travel to Washington, D.C., a photo of the model can be found on the Internet, as can copies of the patent documents.
Lincoln’s “device” was never manufactured, but he personally was a great supporter of the patent system, saying, “The patent system added the fuel of interest to the fire of genius.”
Lincoln is the only U.S. president to hold a patent. 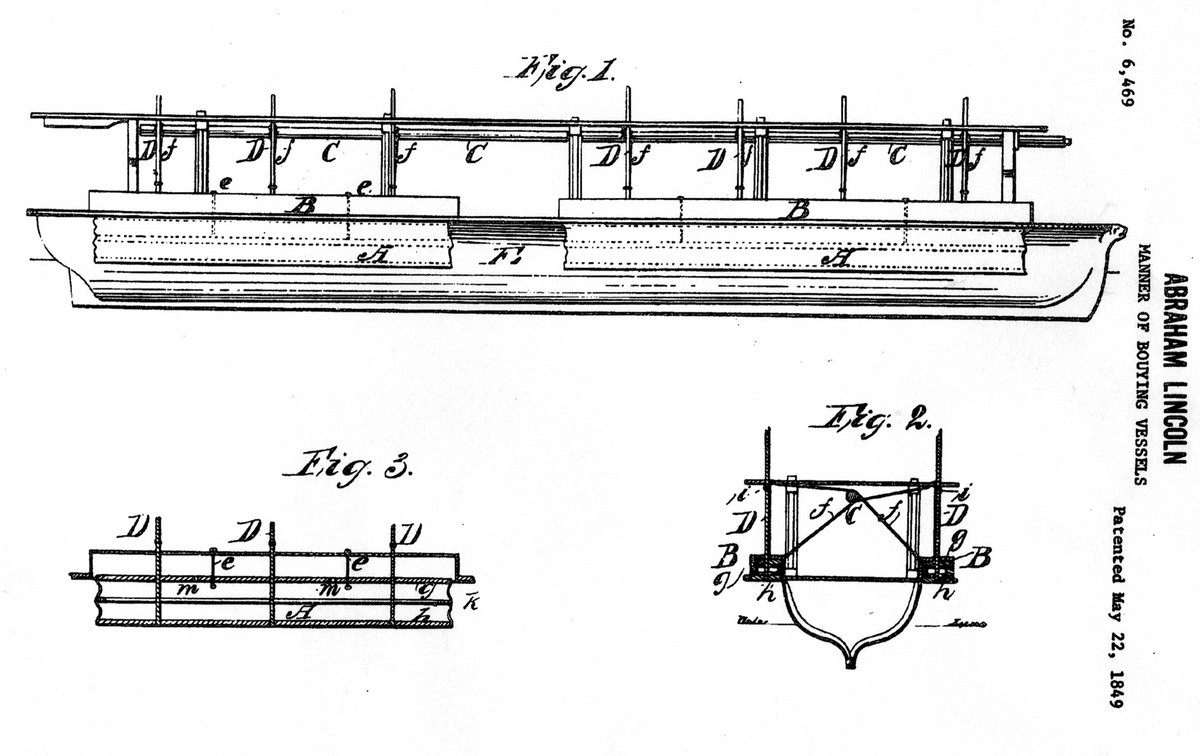 President Abraham Lincoln was the only president to hold a patent. His was a device to lift up a boat that had become stuck in shallow water. The sketches above show Lincoln’s idea for the flotation devices that could be attached to a stranded boat.