In April 1933, a former Vandalia resident, Jeff Freeman, visited his old hometown and sat down with the editor of The Vandalia Union newspaper to reminiscence about the businesses that lined Gallatin Street during his boyhood in the late 1870s and 1880s.
“The famous National Old Trails Road on Vandalia’s leading street was just a sea of mud in which horses and wagons bogged down and citizens feared to cross 50 years ago.
“The old covered bridge over the Kaskaskia had been replaced at that time by a two-span iron bridge with a plank floor, which announced the arrival of any traffic crossing the bridge with considerable noise.
“The first house on the north side of Gallatin street was the old toll house, occupied by Joe Wilson, which still stands on the same site.
“The next house west on that side of the street was the residence of M.J. Harding and J.D. Sayles. This site is currently occupied by Hudson’s dairy and grocery. The James Hooten resident adjoined this property on the west. It is now occupied by Frank Sacoska. On the corner, was the George T. Steinhauer  wagon and carriage shop, and the office of Dr. T.G. Hickman,  which is now occupied by the Indian and Texaco filling station.
“The William Lee lot was next. It had only a shed on it, and was used as a cow pasture. This is now the site of the Sinclair filling station, Connor Motor company, Burtschi used car lot, Pfau’s lunch room and other buildings. Across the street west was the John L. Meyer’s home, and next to it was the George Meek residence, now known as the Mrs. Sallie Stillman home.  A carpenter shop was between this house and the old Blackwell building on the corner.
"The general merchandise store and residence have been replaced by the Standard Oil filling station.
“Going back to the river on the south side of the street, the first block was just a vacant lot with a rail fence around it and was used as a cow pasture. This ground is now occupied by the Phillips filling station, Elmo repair shop, a restaurant and a poultry house. The old Hankin residence was located on the present site of the Shell filling station. Jeff Freeman said he lived in the old house 50 years ago.
“Michael Flood’s blacksmith shop was located in the center of the block, and this property is now the site of the Vandalia Tire shop, Burtschi’s Garage, Locke’s Café, Hayes Bros. Hatchery and Leihser Maytag Company. The old Hornick store was located on the present site of the Ragel grocery.
“The Patrick Heavey lot on the corner was vacant, except for a small shanty. This property is now occupied by E.W. Robbins residence and the Ben Rexwinkle home.  Mrs. Sarah Washburn ran the famous old Washburn hotel on the corner, now occupied by the Vandalia Fruit and Produce company. The building was owned by Mrs. Ann Thompson.
“These are a few of the changes noted in 'Gasoline Alley,’ as the east end of Gallatin Street is known to many. Modern paved streets replace the old mud holes through which the few vehicles traveled. Sidewalks have replaced the planks, which were available for pedestrians in certain seasons  and improvement is noted everywhere.”
The east end of Gallatin remained "Gasoline Alley" into later years, when at least five gas stations lined both sides of the street, and some of the homes and businesses mentioned by Jeff Freeman as being a part of his childhood were also a part of mine. 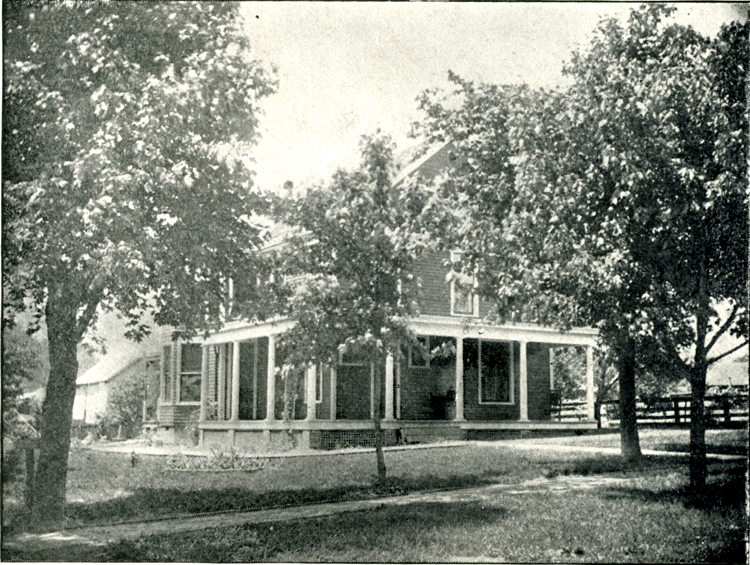 This was the residence of Ben Rexwinkle. It was located on East Gallatin Street in Vandalia.