In many cases, when one is nearing the age of Ethel Gates Booher, the occasion is described more accurately as “observing”or simply “reaching” the honored year, which, in Ethel’s case, is 99.

In Ethel’s case, her homey, cheerful room in the Long Term Care facility at the Fayette County Hospital was alive with greetings, laughter and listening to Ethel’s stories of the past last Friday, as she, and her children and grandchildren literally celebrated Ethel’s 99th birthday.

Ethel’s sharp memory and ability to express it made the occasion indeed, a joyful, and informational, celebration for all.

Meet Ethel Gates Booher as she shares her story, with her

daughters, Donna (Gates) Wood, of Georgia  and Gail (Gates) Swanson of Oklahoma, granddaughters Debbie (Gates) Hamel and Dawn (Gates) Doty, and great-grandson, Eli Mabry, all of Vandalia, gathered around her.

“I came here as a schoolgirl with my mom and dad,” she said. “We lived on a farm out by Vera, by Joe Wiss. He was a big farmer. I went to Potts School. I just went through the eighth grade.”

Working for a Living…Shoe Factory

She recalled her first job. “It was at the (Johnson, Stephens & Shinkle) shoe factory in Vandalia. My mom and I went the same day.

She remembered that she put binding on shoes that first day. ”They paid 15 cents an hour,” she said, “but, you know, you could buy a print dress for a dollar and a half. And I always put some money in the bank.”

“You know, we had always lived out in the country, and my dad and mom were poor. They didn’t have much money, so I would give them a dollar or two.”

They had moved to Vandalia when Ethel and her mother began working at the shoe factory.

“You know what he did?  He would open a gallon of green beans, put them in the steampot,  not put anything (seasoning) in them and let them get hot. Just as soon as I found out I could do what I wanted to, I’d fry some bacon and put it in there, and oh, it was so much better.

“The chef was getting most of the money, but I thought I was doing the smartest part of the work.”

In between the shoe factory year and the Evans Hotel times, she met and married Oscar Gates, when she was 17 years old.

“I thought I knew everything (at that age),” she said, laughing.

She and Oscar had three children: son, Lee, and daughters, Donna and Gail.

“We had been listening to the radio,” she shared, “And we thought Gail was a pretty name.”

She recalled vividly the birth of her first born, her son, Lee, now deceased.

“It was the Fourth of July,” she said. “I didn’t think it was time for him yet, for another month.

“We thought we would go to St. Elmo to an airplane doings. There were airplanes from St. Louis, and they were giving tickets for a ride. Well, he (Oscar) had worked all day, and we went to Bluff City and got a bottle of pop.

I had a big bottle of the orange soda pop and I no more than got through drinking it, and I thought, ‘There must have been something wrong with that soda pop, my stomach hurts real bad.’ My stomach hurt all the way home,” Ethel said.

“We went to bed, but I couldn’t go to sleep. I kept wondering what was wrong with me.”

Oscar went to tell her mom and dad, and they got the doctor.

“The doctor said, ‘Well, she is just in labor, that’s the only thing that’s wrong with her.’  The old Dr. Moore, Dr. Stanley Moore’s dad, was my doctor.”

Oscar died and Ethel was a widow for many years. Later in life, she married Mr. Booher, and was again widowed.

She also was an “Avon Lady,” serving many customers, and also worked at Norge Co. in Effingham, as did many from this area.

Ethel was always busy and was a hard worker in her life until retirement. She enjoys her family, playing dominoes and visiting, and said she went to the First Baptist Church in Vandalia.

She now watches the service in her room every Sunday, taking her lunch in her room so she won’t miss it. She is exceptionally alert and seems very happy and content as she advances toward her 100th birthday next May. 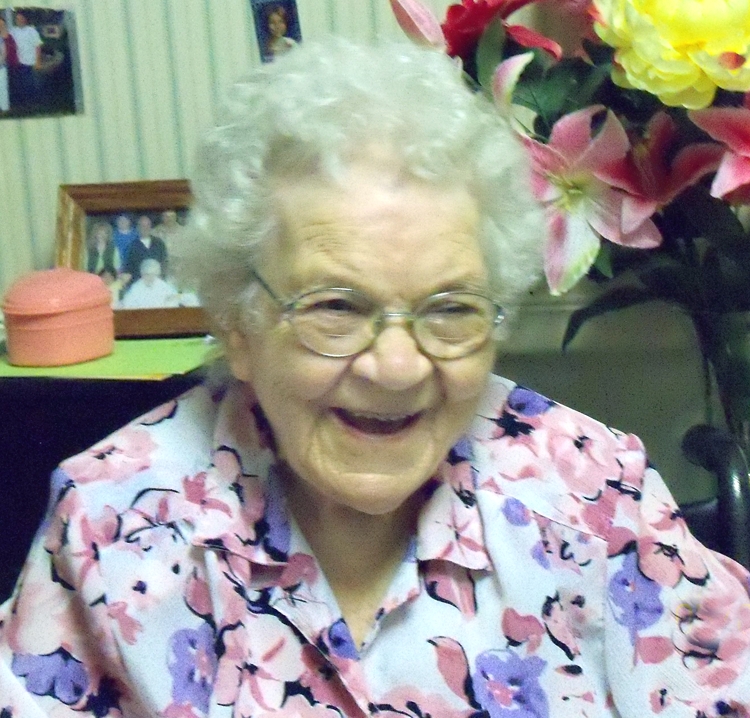