Services were held at 10:30 a.m. on Tuesday at First Baptist Church in Vandalia, with the Rev. Robert Weaver officiating. Burial was in Fairlawn Cemetery in Vandalia. Visitation was held an hour before services on Tuesday at the church. Hohlt & File Funeral Home in Vandalia was in charge of arrangements. Memorials: Arthritis Foundation, 1108 S. Willow Drive, Suite 4, Effingham, Ill. 62401.

She was a seamstress at the former Princess Peggy Dress Factory in Vandalia and a member of First Baptist Church in Vandalia.

She was preceded in death by her parents and a sister, George Ann. 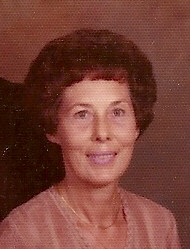