A Vandalia representative on the National Road Association of Illinois Board concedes that a recent grant received by the group won’t provide funding for everything it needs. But it comes pretty darn close.

“We will always have things that we need to take care of or want to add, but this will come pretty close to giving us what we need,” said Mary Truitt.

Truitt was referring to the $101,750 grant awarded by the Federal Highway Administration for the National Road Interpretive Center in Vandalia.

In sharing in the grant award announcement, Vandalia officials said that the grant, in general, will allow the National Road group “to develop a primary interpretive and resource center.”

Truitt was more specific about what the grant will provide for the center, which is located in the 100 block of South Fifth Street in Vandalia, just north of city hall in a building that the city leases to the organization for a nominal annual fee.

“We will get display cabinets, and research and design some exterior tourist signage,” she said.

“We will also be creating busts of (George) Washington, (Thomas) Jefferson and (Albert) Gallatin, and we will have stories about each of them to go along with the busts,” Truitt said.

It was Jefferson who dreamed of this nation’s first federally funded highway, and Jefferson signed the legislation allowing for the construction of the National Road. Gallatin came up with the plan, which included having the road to go through east state or territorial capital.

Vandalia was the capital of Illinois at the time the road was constructed, and it is the original terminus of the highway, which has also been known as the Cumberland Road.

Truitt said the grant will also fund an illuminated wall map that will feature buttons. When the buttons are pushed, the tourist will hear a story about that location.

The National Road Association also will design and fabricate educational panels about the history and culture of the road, she said.

The group hasn’t gotten the grant funds yet, but Truitt said it will be ready when the money gets here.

“We’re going to start now on getting bid, so when we get the money, we’ll be ready to get moving on everything,” she said.

Beyond the work on all of the new additions to the interpretive center, the National Road Association has plans for more improvements down the road.

“We want to build a garage behind the center so we will have a place to store our Conestoga wagon,” Truitt said. The wagon is now being displayed at the farm museum in Greenville.

“Our garage will have windows in it, so the wagon will always be on display,” she said. 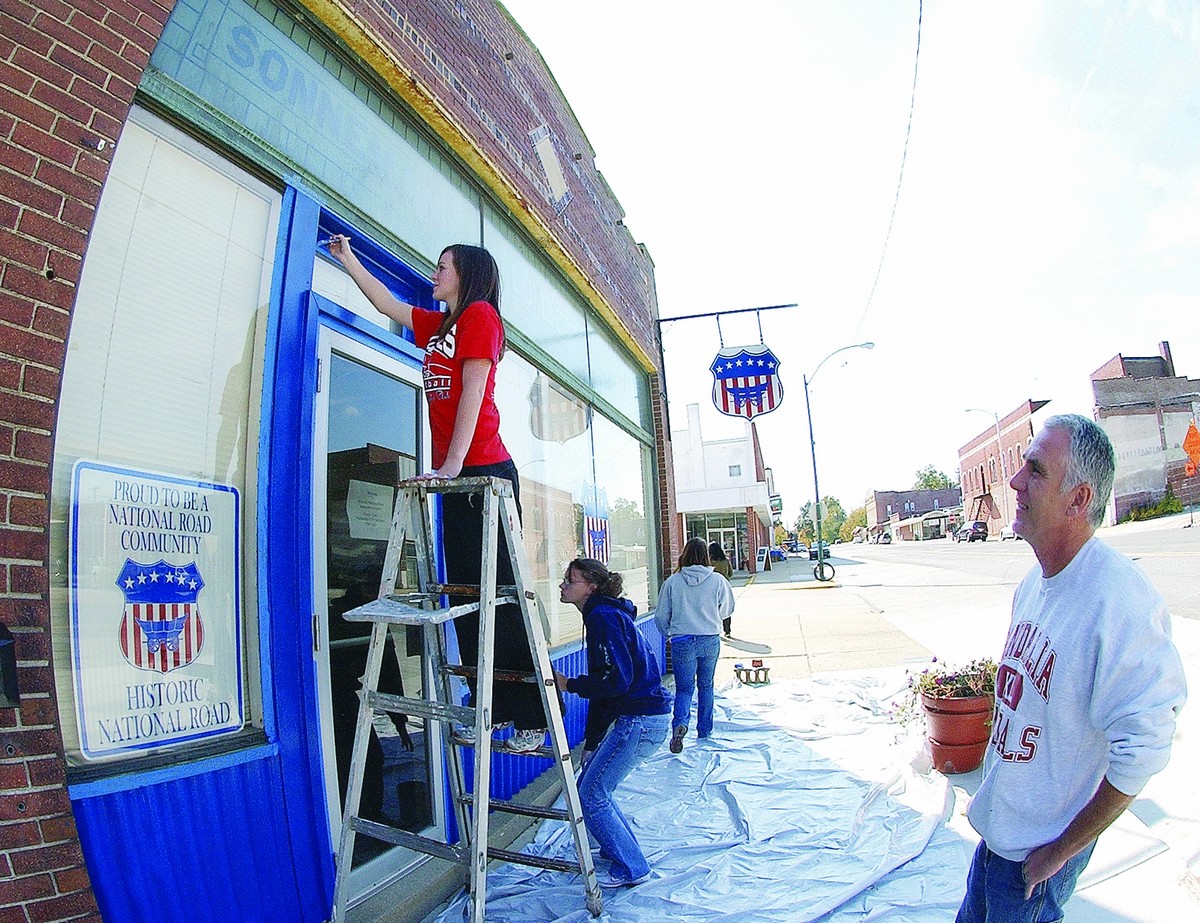 Steve Barker (right), president of the Vandalia Main Street Executive Board and chairman of the organization’s design committee, looks on as Katie Vieregge and Natasha Opfer of the Vandalia Community High School student council paint the exterior of the N