Even at full strength, the Vandalia baseball team figured to have its work cut out for it Friday in its season-opener against Rockridge, which made a four-plus hour trek south from Taylor Ridge to play the Vandals.

So it obviously didn’t help that three of Vandalia’s five returning starters were unavailable against the Rockets.

Despite being shorthanded, VCHS managed to keep things competitive for the most part. But its inexperience proved too much to overcome in the end, as the Rockridge rolled to a 9-2 win.

"You just have to do your best when two of your nine starters have varsity experience," Vandals coach Luke Hohlt said. "Overall, I wasn’t disappointed by our effort."

Rockridge took control with a four-run third and was never seriously threatened the rest of the way, as Vandalia was limited to just three hits.

Craig Freeman, who threw just 1 2/3 varsity innings last year, had moments of promise in his first career varsity start. But a rough third inning proved too much to overcome, as Rockridge scored four times on five hits and two walks.

The Vandals kept Rockridge from blowing the game wide open with solid defense throughout and three solid innings of relief by Kyle Hawkins.

Hawkins allowed just one earned run on one hit and a walk in his varsity debut, and the Vandals looked to be in midseason form in the field.

Shortstop TK Kinkead was particularly impressive in recording five assists, including a spectacular one on a long throw from deep in the hole in the third inning.

Kinkead was also in the middle of a nifty 4-6-3 double play to keep the third inning from getting totally out of hand. Unfortunately, Rockridge did a lot of damage in between the standout defensive plays, and the Vandals were unable to counter.

"We have some work to do with our approach at the plate," Hohlt said. "But defensively, we made some nice plays and got pretty good innings from Freeman and Hawkins."

The Vandals scored both of their runs in the fifth inning.

Matt Hoffman led off with a double down the right field line, and he scored moments later on an RBI groundout by Freeman. Trevor Montgomery scored Vandalia’s other run on a wild pitch after reaching base via a fielder’s choice and moving up two bases on Freeman’s groundout and a steal.

The Vandals wound up stranding seven on the basepaths, however, including two in the opening inning.

Vandalia had two on with nobody out after freshman Dathan Berning led off with a single and Craig Freeman walked. But Ryan Thiele followed with a tough-luck lineout to right, and Rockridge starter Kyle Rettick escaped the inning unscathed by getting a strikeout and a groundout.

Thiele started the fourth inning with an infield single and stole second, but Rettick once again managed to work out of the jam.

Despite the outcome, Hohlt was not discouraged with the loss, considering the circumstances.

"It is a long season and we are just going to take it one step at a time," Hohlt said.

The Lancers (3-0) had little trouble rolling to a five-inning victory, no-hitting the visiting Vandals.

Kinkead took the loss for Vandalia. The Vandals did manage to salvage the JV contest, 7-6. 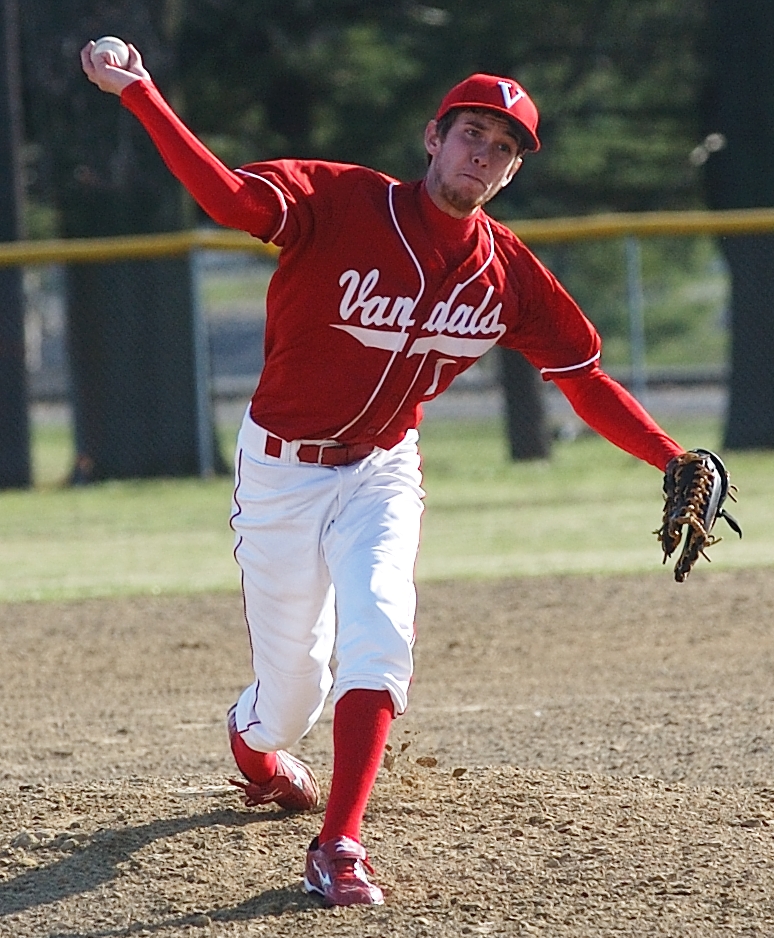