Story and photos by Leah Williams

Major had quite the journey to his forever home last week. 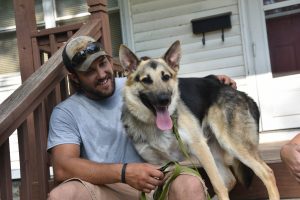 It took two days and two drivers across several states to accompany the one-year-old German Shepherd to his final destination with his favorite toy, a green hippo, in tow.

He arrived on the front porch of local veteran Cory Klitzing of Vandalia, on Thursday afternoon.

“I think this is amazing,” Klitzing said as he sat next to his new companion.

Major, a service dog, was donated to Klitzing through Red Leg Tech, a new organization with a mission to help as many service men and women as well as first responders as possible.

Jennifer Sandiford, a volunteer with Red Leg Tech, said the organization was founded by two veterans who recently retired from the Army and who wanted to give back to the community. Both of them also owned German Shepherds and saw how they could help other fellow brothers and sisters in need.

“They are great dogs,” she said. “They like their temperament and thought that they would make great service dogs.”
In searching for a veteran for the donation, Sandiford said Klitzing’s name kept coming up. He had been deployed in the National Guard along with her husband Andy. Klitzing enlisted in 2005 and retired from service in 2014. He was deployed to Afghanistan in 2008.

Klitzinger said he had been looking to get a service dog when the organization asked if he would like one for his household.

“I took it as a sign, and said I’ll take him,” he said. “He’ll be a good companion, someone I can depend on and who can depend on me. Keep me from getting silly thoughts in my head.”

“We will do a little training, and oftentimes we work with them when they are little pups,” Sandiford said. “This was just too perfect of a match to pass up.”

The service dog delivery is one part of the organization’s mission. Sandiford said volunteers have helped a Vietnam veteran get access to his home. Another example was assisting a family who had fallen on hard times and had to spend money budgeted for birthday gifts on car repairs. The volunteers rallied together to throw the little girl a birthday party.

Sandiford said the goal is for local veterans to continue to receive the same community and camaraderie that felt during service. Red Leg Tech is always on the lookout to help other veterans who may be in need.

“The glory about being a veteran and being in the military is you people with all different skills from all over the country,” she said. “If it’s in our wheelhouse to do it, we’ll do it. If we can’t, then we will find someone and some way to get it done.”

Whatever lies ahead, Klitzing said he is looking forward to filling his days with trips to the nearby dog park and other adventures. 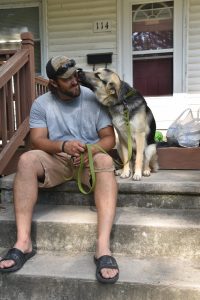