A local woman was honored at the Vandalia City Council meeting in recognition of her many contributions and volunteer hours that she has dedicated over the years. 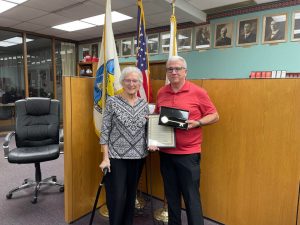 Jean Stombaugh, left, is presented a key to the city and a proclamation by Mayor Ricky Gottman during the Nov. 7 meeting.

Mayor Ricky Gottman presented Jean Stombaugh Monday night with a proclamation naming November in her honor. He also surprised her with a key to the city.

“I would like to honor a young lady who has been very instrumental in our community for many years,” Gottman said.

Stombaugh, who will be 90 this month, has had her hands in many projects, including the first student loan association. She was a former President of the Chamber of Commerce, an instrumental member of Vandalia Main Street and a longtime caretaker of the Lincoln Park and the Sitting With Lincoln statue. Stombaugh also helped raise funds for the full-bronze statue, which is across the street from the old Statehouse, and it commemorates Abraham Lincoln’s time as a member of the General Assembly.

Gottman said he has always considered Stombaugh “a leader and a shaker,” and her and her family’s efforts have helped elevate

“Her dedication and loyalty to a town that she is very proud of and continues to be be proud of,” he said. “We are proud of her.”

Stombaugh said she was very surprised to receive the honor, which was given to her in front of a roomful of her family.

“I love this community,” she said.

Also, at the city council meeting, the council approved the purchase of three license plate cameras. The cameras would be operating 24-7 and would scan each vehicle passing through a designated area.

Vandalia Police Chief Jeff Ray said the cameras would assist law enforcement in real-time information needed for investigations, including warrants, stolen vehicles, missing persons, thefts and other crimes. He added that the same technology is being considered in St. Elmo, Ramsey and the Fayette County Sheriff’s Office.

“It will be another tool in our toolbox,” Ray said. 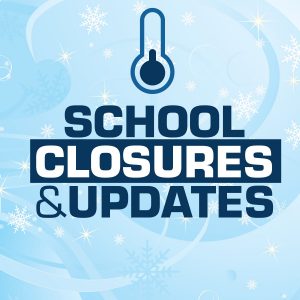