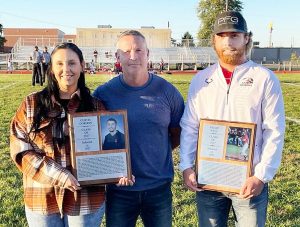 Submitted photos
Curtis Gordon and Richie Well were inducted into the VCHS Hall of Fame prior to the Vandals’ Homecoming game on Friday night. Above, from left, are Courtney Gordon and Dan Gordon, representing Curtis Gordon, who is living with his wife, the former Jalea Paslay, while stationed at Concordia, Calif.; and Richie Well.

RICHIE WELL
Richie Well, a 2017 graduate of Vandalia Community High School, was a standout three-sport athlete participating in football, basketball and baseball.
In football, Richie was a two-year starter at quarterback and defensive back.

As a senior, Richie led the team to an 8-1 record and the first-ever South Central Conference championship in football. Well was both an all-conference quarterback and defensive back that same season.

In Richie’s basketball career, he amassed 1,372 points and was named to the South Central all-conference team in both his junior and senior years.
At the conclusion of his senior year, Richie was named an honorable mention to the IBCA All-State Basketball Team.

In baseball, Well was a four-year starter and three-time South Central all-conference player. In the spring of his senior season, the baseball team would win the South Central Conference championship for the first time since 2003.

Richie was both a dominant hitter and pitcher his senior season, being named to the IHSBCA All-State Team.

After high school, Well would go on to play baseball at Kaskaskia College. At Kaskaskia, Richie was named freshman of the year and best offensive player as a sophomore.

After graduating from Kaskaskia College, Well went on to play baseball at Southern Illinois University at Edwardsville.

As a senior at SlUE, Richie set a new record for doubles in a season, and had the fourth-most homers and third-most RBIs in a season.

At the conclusion of the 2022 Ohio Valley Conference Tournament, Well was named to the all-tournament team.

CURTIS GORDON
Curtis Gordon, a 2017 graduate of Vandalia Community High School, was an outstanding member of the track and field team.
In high school, Curtis had two signature events – the pole vault and 110-meter high hurdles.

As a freshman, Curtis qualified for and placed at the state meet in the pole vault. His sixth-place finish was his first of six state medals.

As a sophomore, Curtis placed seventh at state in both the pole vault and 110-meter high hurdles.

His junior season was one for the record books. Curtis set the school record in the 110-meter high hurdles with a time of 14.90 seconds, finishing third in the state meet.

That same year, Gordon would set the school record in pole vault with a height of 16 feet, becoming an IHSA state champion in the event.

In his final season, Curtis would go on to finish second in state in the pole vault.

After high school Gordon would go on to compete for the University of Illinois track and field team.

As a true freshman at Illinois, Curtis made the outdoor team in the pole vault.

During his sophomore season, Curtis began competing in the heptathlon. In his final season of competition, Gordon finished 10th in the heptathlon at the 2019 indoor Big Ten Championships, winning the pole vault portion of the event. 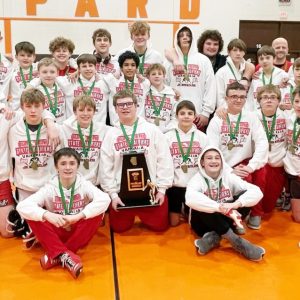 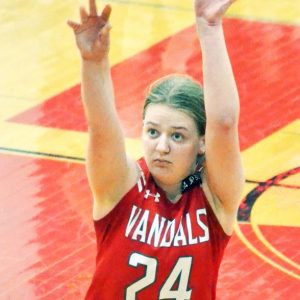 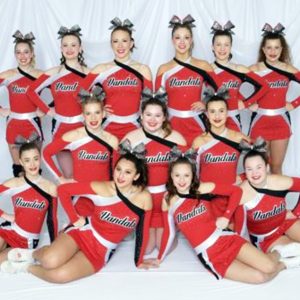 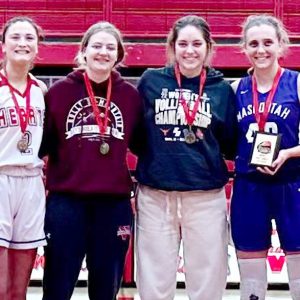 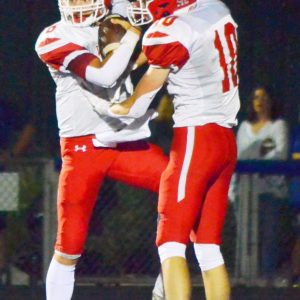