story and photos by Leah Williams 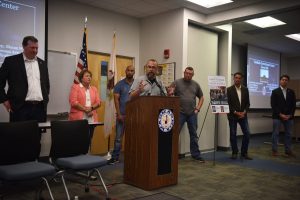 Council 31 AFSCME Regional Director Eddie Caumiant speaks as part of a panel on Wednesday, June 23, at the Kaskaskia College Vandalia campus. Hosted by State Sen. Jason Plummer and Rep. Blaine Wilhour, the townhall meeting presented an opportunity to update the public about the future of the Vandalia Correctional Center.

State Sen. Jason Plummer and State Rep. Blaine Wilhour, along with a panel of other local advocates and legislators, called for transparency from the state and unified efforts from the community regarding the future of the Vandalia Correctional Center.

A town hall meeting held at the Kaskaskia College Vandalia campus presented an opportunity for ongoing discussions about possible state decisions to shutter or potentially close the prison.

Plummer started the meeting by highlighting a timeline of events that local legislators have taken to try to get to the bottom of the issue. After information surfaced in February about consolidating the housing units at Vandalia, lawmakers attempted to schedule a town hall meeting with Illinois Department of Corrections Director Rob Jeffreys, who had agreed in a web meeting on March 1 but stated he would not attend and instead look to engage with the union.

Plummer added that legislators have no more information to date as they did back when the news first broke.

Council 31 AFSCME Regional Director Eddie Caumiant discussed attempts to negotiate with IDOC. He said a meeting a couple weeks ago, where 35 questions were addressed, has still remained unanswered.

“In my line of work, if it is on paper, that is what happens,” Caumiant said. “That is not what is happening. Instead we get this chaotic circus of lying to legislators, lying to the public and refusing to ask simple questions.”

Other speakers included State Senators Terri Bryant and Steve McClure. Bryant, who retired with IDOC in 2014 before her stint in politics, discussed how two facilities in her district – DuQuoin and Dixon Springs – were quietly closed recently without the proper hearings and other protocol. She urged the community to get involved and spread the word while they are trying to get answers.

When the discussion was opened up to the public, several audience members, community members and law enforcement officers voiced their support in solidarity for the prison.

Vandalia Mayor Ricky Gottman said during the meeting that the city council and the city of Vandalia stand behind the prison.

“You are Vandalia,” he said. “It’s our prison, and I’m here to keep the prison open.”

The Department of Corrections has not announced any plans on closing the Vandalia Correctional Center nor has it stated that there are preparations in place for layoffs or transfers for staff. 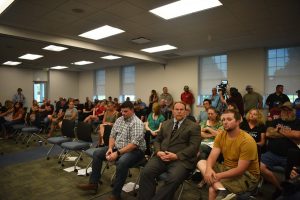 A packed room of more than 100 citizens and law enforcement officers attended the event. 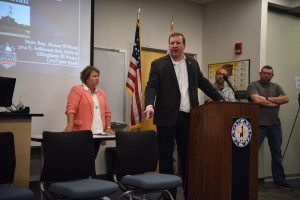 State Sen. Jason Plummer gestures to the empty chairs that were placed during the town hall meeting at Kaskaskia College Vandalia campus. The meeting discussed the future of the Vandalia Correctional Center, and representatives from Gov. J.B. Pritzker’s office and the Illinois Department of Corrections was invited but did not attend.