Colin Ledbetter knows that he will be able to thank the 39 people who donated the blood that saved his life.
But he did show up at last Thursday’s blood drive to show his appreciation for those whose donations will save the lives of others, maybe even some of his fellow police officers. 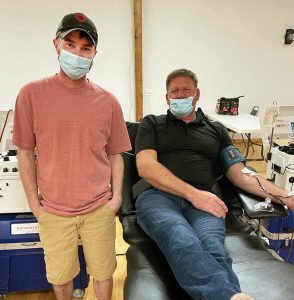 Colin Ledbetter (left), the Vandalia man who survived after sustaining three gunshot wounds while on duty as a St. Louis Municipal Police Department officer last month, is pictured with Brian Oberlink, one of the donors at last week’s Rotary Club blood drive.

And, the large turnout for the blood drive shows that local residents appreciates and supports the local man who was injured while on duty as a St. Louis Municipal Police Department officer.
In fact, the American Red Cross did not have enough supplies on hand at the Vandalia Moose Lodge for everyone who showed up.
“It was a resounding success,” said Chuck Hutson of the Vandalia Rotary Club, the sponsor of local blood drives.
Typically, Rotary drives collect 65-70 units of blood.
Thus, the Red Cross set the goal for last Tuesday’s drive at 70 units.
By the end of the six-hour blood drive, 108 units were collected.
Many more would have been collected had there been more supplies.
Hutson said that the Red Cross, “being conservative with its resources,” added additional supplies above the drive goal, enough to handle 100 donors that day.
Unfortunately, the opportunity to collect even more units of blood was lost, with numerous donors being turned away when all supplies were used up.
“It became very obvious that the Red Cross had underestimated the love and affection the community was feeling for the wounded young man,” Hutson said.
“The turnout for the blood drive dedicated to Colin Ledbetter was incredible.
“This was the first time a Rotary drive has netted more than 100 units in more than two years,” Hutson said.
“The Rotary Club, the Red Cross and, of course, the family of officer Colin Ledbetter are so thankful for the community’s support,” he said.
“And we deeply apologize to those who were unable to make donations.”
Helping to make the blood drive a success, Hutson said, were the Moose Lodge, McDonald’s, Subway and the volunteers.
Ledbetter was given 39 units of blood after sustaining three gunshot wounds while attempting to apprehend homicide suspects on Jan. 26.
The 25-year-old Vandalia man was saved by the efforts of medical experts at Barnes-Jewish Hospital in St. Louis after blood was drained from his body and he was without a heartbeat.
The fact that he is alive today is considered a miracle by many.
Ledbetter was joined by his mother, Lisha, in the first few hours of the drive, and his father, Steve, joined them mid-afternoon.
Last Tuesday’s blood drive was an opportunity for Ledbetter to honor those who understand the importance of donating blood.
“This is great,” he said about the drive turnout.
“I took 39 units (of blood), and like my dad said, that’s 39 people I will never get to see or thank,” Ledbetter said.
“Being here and seeing this is definitely something I wanted to do, to show my support for these donors, because I’ll never get to do that for those other 39 people,” he said.
“I do see this as important, because the next day, it could be one of my buddies laying on that table needing blood,” Ledbetter said.
He said the response of the community since he was injured, Ledbetter said, has been overwhelming, but not totally surprising.
“It’s definitely been eye-opening, just the amount of respect and support that I have gotten from the town, the amount of caring that has come from this town has been amazing.
“I always knew that the people in this town are so friendly, caring and good to each other, but to see it come toward me has been just overwhelming,” Ledbetter said.
He’s still unsure how long his rehabilitation will take, but thus far, “it has gone very well.
“I am definitely walking a lot better,” and his damaged vocal chord is almost back to normal, he said.
A lot of how well he progresses, Ledbetter said, is up to him, though “they are pushing me to my limits.”
As for the future, he said, “I’m definitely going to go back and work in the district I came from.
“I enjoy the patrol side of things,” Ledbetter said. “Interacting with people is when you can do the most as a patrol officer.
“So, that’s kind of where my heart’s at right now.
“But I could go anywhere in the department or I could come back and work in Illinois,” Ledbetter said.
St. Louis sometime gets a bad rap because of crime in the city.
“But I see a lot of good people there and that’s what keeps me coming back there,” he said.