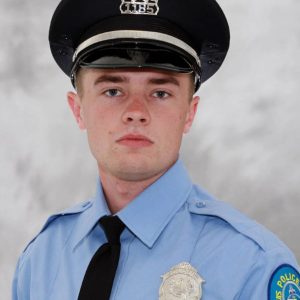 Area residents have two reasons to donate blood next Tuesday.
First, the American Red Cross and the local drive sponsor, the Vandalia Rotary Club, have decided to dedicate next Tuesday’s drive to Colin Ledbetter.
The blood drive will be held on Tuesday at the Vandalia Moose Lodge, with the new hours of 11 a.m.-5 p.m.
Ledbetter, a 25-year-old Vandalia resident who serves as a St. Louis Municipal Police Department officer, received 39 units of blood after sustaining three gunshot wounds late last month.
In a story in last week’s issue, Ledbetter’s father, Steve Ledbetter, emphasized that blood donations were a key factor in saving his son’s life.
“That’s 39 people we owe a debt to,” Steve Ledbetter said.
A second reason for donating blood next Tuesday is the urgent need for blood.
Chuck Hutson of the Vandalia Rotary Club said that the American Red Cross currently is at its lowest level of blood resources in a decade.
Thus, the need for more donors.
Hutson spoke on the reasons for giving blood next Tuesday.
“My (Red Cross) representative has asked me several times over the years about dedicating a blood drive to someone once in a while, and after reading the story about Colin in last week’s newspaper, this popped into my head.
“This is a prime opportunity, right?” he said. “Let’s dedicate this blood drive to Colin.
“What struck me the most in the newspaper story was Steve saying that they owe 39 people,” Hutson said.
“No, you don’t,” Hutson said, “but this helps emphasize the importance of people donating blood.
“People often ask you if there’s anything they can do for you, I would like to do it.
“There are all of ‘Back the Blue’ things and always talk about paying it forward,” Hutson said.
“Here’s your chance, folks,” he said.
With community support, this blood drive could mirror the one after the start of the pandemic.
The Rotary Club sent out of plea for community donors, and the community responded.
At that March 2020 drive, with about three hours to go, the donor count was 84.
The Red Cross had to scramble to get more supplies from Effingham, and by the end of the drive, 125 showed up as donors and 134 units of blood were collected.
Hutson noted that there is a way for potential donors to cut down on their wait time – they can register for an appointment online.
He said donors can simply make an appointment by going online to www.redcrossblood.org.
“It’s a real simple process,” Hutson said.