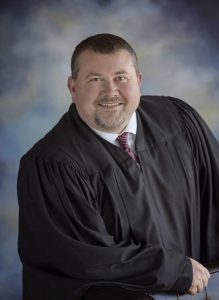 Judge Marc Kelly of Vandalia has announced his intention to run for resident circuit judge of Fayette County.
This vacancy was created when Judge M. Don Sheafor Jr. announced he was not seeking retention.
Kelly has served as an associate judge for the Fourth Judicial Circuit since March of 2011.
The Fourth Circuit consists of nine counties, which includes Fayette County. Over the past 10 years, he has had the privilege to serve the citizens of the Fourth Judicial Circuit by holding both criminal and civil court in each of those counties, and has been specially assigned by the chief judge’s office to cases outside of the Fourth Judicial Circuit.
In addition to his daily assignment, Kelly is the presiding judge for the Fayette County Drug Court program, appointed by the Illinois Supreme Court to a statewide committee for criminal jury instructions and by the Illinois Judicial College for a special task force regarding the use of remote hearings.
Prior to being appointed, Kelly was a partner in the law firm of Burnside, Johnston, Sheafor and Kelly, where he practiced family law, civil litigation, probate and criminal defense for 10 years and served as the Fayette County public defender for two years.
Kelly is a third-generation judge in Fayette County, following in the footsteps of his father, William Kelly, and grandfather, George Kelly.
Kelly, and his wife, Michelle (Johnson) were both raised and attended school in Fayette County, and returned to start their family and careers.
They are both active in various community service groups and local organizations.
Michelle teaches fifth grade for the Vandalia Community School District. Their son, Andrew, attends Vandalia Community High School and is active in sports.
To volunteer or obtain additional information, go www.judgemarckelly.com or follow him on Facebook at Citizens for Judge Kelly or Instagram at citizensforjudgekelly.
The Illinois general primary will be held June 28, followed by the general election on Nov. 8, 2022.