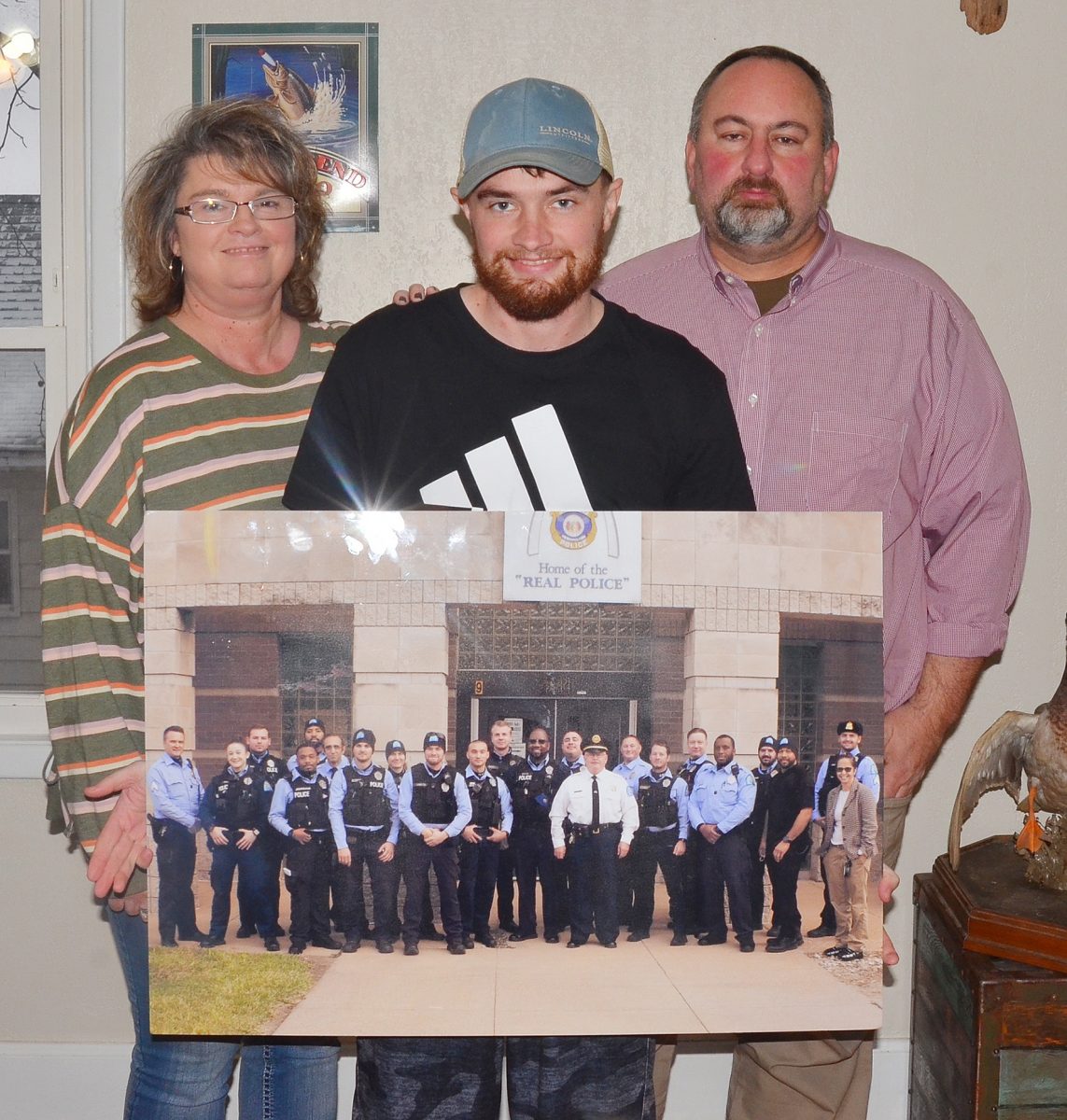 Colin Ledbetter holds a photo of the officers in his SLMPD district, flanked by his parents, Lisha and Steve Ledbetter.

When Colin Ledbetter walked into the Metro Community Church service to a thundering applause on Sunday, it was one opportunity for him to give thanks for all of the prayers said on his behalf in recent weeks.

But it was one breath that kept those experts working to save his life.

More than once, Ledbetter was without a pulse and heartbeat, blood drained from his body after sustaining several gunshot wounds.

Several coincidences played a role in being able to give the 25-year-old son of Steve and Lisha Ledbetter a chance to live.

Last week, Colin returned to his Vandalia home, with 17 St. Louis Municipal Police Department vehicles and more SLMPD officers bringing him home in an escort that was initiated at Barnes-Jewish Hospital in St. Louis.

“We have gone from the absolute worst day we ever lived to every day getting better and better,” his father, Steve, said.

“And Tuesday (the day of the escort home) was pretty amazing, the love that was shown by everyone,” he said.

Also part of that escort were other law enforcement officers, including ones from this area; emergency medical crews; National Guardsmen; and Illinois Department of Transportation crews.

The details of all that took place on the evening that Colin and his partner, Nathan Spiess, both sustained serious gunshot wounds are still somewhat unknown, with an investigation into the incident continuing.

Colin is relying on what he has been told about that night, because, “I remember absolutely nothing from the incident. I can’t remember back to September, really,” he said.

Ledbetter was on patrol with his partner in St. Louis on Jan. 26 when the two St. Louis Municipal Police Department officers spotted a car matching the description of one tied to a homicide the night before on Natural Bridge Road.

What’s known is that the two officers began pursuing the vehicle in North St. Louis and continued doing so into St. Louis County.

“I called one of my buddies was previously on the squad with me.

“He’s one of our specialized units that was working that day,” Colin said.

“They’re more experienced with car pursuits, spike strips, stuff like that. I asked where they were working, and told him we might need some help. We had them on standby,” he said.

Colin said another city squad car was alerted and began going to that area, and that they passed a county squad car, which turned around and joined in, with both a fair distance from Colin and his partner.

Steve said that he has been told the pursuit stopped when the suspects’ vehicle had a flat tire, and two of its occupants got out of the vehicle and began running.

Colin and his partner began chasing those suspects and were separated, from what the Ledbetter family has been told.

What’s believed is that Spiess was shot first and called to Colin for help.

While running to his partner, Colin was shot at least three times, the Ledbetters have been told.

One of the suspects was fatally shot by officers.

It’s at that point that everything that gave Colin a chance to survive began falling into place.

Another city officer, Michael Heinz, arrived at the scene to assist, and an ambulance from Christian Northeast hospital enroute to another call and was near the incident, and responded to assist the two officers.

Spiess was shot in the left leg, with his left femur being shattered.

Colin had been shot at least three times.

Colin sustained one shot in foot, and another grazed his thigh. The third injury, the most serious, was a gun shot to the groin, with the bullet severing his femoral atery.

That injury was causing him to bleed out quickly.

Colin and his partner were taken to the hospital with three emergency medical personnel in back in a crowded ambulance.

Efforts to save Colin were just about over when someone saw him trying to breathe.

“As they said in the operating room,” Lisha said, ‘When we saw him take a breath, we saw that he wasn’t giving up, and we weren’t giving up on him, either.’

“He said that there were 12 people working on him,” she said.

“I’ll say this about Barnes,” Steve said, “Not only were they really talented and skilled, but they were just good. They were all caring and I don’t know, maybe it’s because of the situation, but I don’t think so.

“I think that they needed this themselves.

“You can imagine being in a room, working to save somebody, and having that fail.”

Trauma specialists began giving him blood and a magnesium IV while his chest was cracked open to massage the heart.

He underwent surgery that day, and then another surgery the next day.

“At that point,” Lisha said, “we were still not sure what the outcome was going to be.

“And the doctor came out, and he said, ‘He is going to live. Now, we don’t know what the brain is going to do,’ because he was 15 to 20 minutes without oxygen,” she said.

About 2 a.m. the following Sunday, “we got a call from one of the officers who was staying with him, and he said, ‘He woke up. He’s saying his name, he’s told us his birthday and he said that his girlfriend is Montana (Tonn),” Lisha said.

“The doctors, the level of doctors, they are men of science and medicine, and they could easily say, ‘We did it,’ Steve said.

“When people have that level of skill and training tell you it’s a miracle, you probably just shut up and say it’s a miracle, because they just don’t see it, even though they do this all of the time,” Steve said.

He said that they gave Colin 39 units of blood, which is about three times what is in a person’s body.

The first thing that Colin remembered after waking up was “them giving me Botox shots in my throat because of my paralyzed vocal chord.”

Initially, he said, there was confusion.

“I kind of just sat there and observed, which I think any normal person would do. I don’t want to start just saying things.

“I obviously asked a lot of stupid questions probably at that point, like, what’s all this about,” Colin said.

Lisha said, “He asked me several times, ‘Why am I here, Mom?’

He doesn’t remember, Lisha said, receiving and sending some text messages, with some of his messages being somewhat nonsensical.

“You could just see that he was trying to process everything,” Lisha said.

“He had an officer with him at all times. Some of his buddies would come up and they would try to help him understand a little bit of what happened, because, obviously, that was important to him,” Lisha said.

She said that when she and Steve arrived at the hospital after learning he had been shot, they were greeted “probably about 200 officers outside.

“They were as distraught as we were,” Lisha said.

“His squad was in his room with us, they stayed with us most nights.’
“They told us, ‘They call me Mom Lisha and say, ‘You now have a lot more sons,” Lisha said.

Steve and Lisha give thanks to God and to all of those who offered up prayers for his survival.

“From the minute he got shot,” Lisha said, “I believe God was in it.”

“Whether it’s a miracle that Colin survived,” Steve said, “ the real miracle in some ways is what all of these officers do everyday.

“They all think they can save everybody, and they’re going to try.”

Lisha said that even before they got to meet the EMT who responded to the shooting, “She sent Steve a message. She said, “Tell his mother there were angels inside that ambulance.

“She said that it’s “unheard of that we were just around the corner for something like that,” Lisha said.

When it came time for Colin to come home, the Ledbetters were told that the SLMPD would escort him out of the hospital.

He was sent off by the department’s honor guard of bagpipes and drummers, with the Ledbetters being told that those officers were more than happy to do it in this situation, due to the fact that they typically only get to provide those services for funerals.

All of the officers, including Colin’s lieutenant, captain and major, were part of that escort, with other city officers covering their district for the day.

The Ledbetters thought that they would just be escorted out of St. Louis, but Lisha said she was told, “No, we are going to take him home.”

When they arrived in Vandalia, she said, “To see the fire department and all of the people, it was just amazing.”

The support from the community, the Ledbetters said, “has been amazing.”

After the SLMPD officers dropped Colin off at home, they were fed by Ponderosa.

Anita Gottman, the wife of Vandalia Mayor Rick Gottman, “bought Blue Line flags for all of the officers that stayed with him and were with us from the beginning.

“And our ladies group at Metro are bringing us meals every night till the middle of March, so we can just spend time with him and don’t have to worry about that.

And the Ledbetters are also thankful beyond words for all of the praryers given for their son’s recovery.

“Everything has been so great and so helpful,” she said.

Colin is now going to rehab and being visited by nurses, and he is considering whether he will continue being a patrol officer.

“I guess, the good news about me is that I could go back and my partner probably not as much because he remembers the whole incident.

“It would be harder for him to walk right back into the job just because I didn’t have the trauma that he did,” Colin said.

The 2014 graduate of Vandalia Community High School went to Greenville College for a while and played soccer at the college for a season.

In 2016, he joined the National Guard and now holds the rank of sergeant, having been deployed to Kuwait, Bahrain and Jordan.

In November 2017, he entered the academy to join the SLMPD, and began training with city officers in May 2018.

Colin said that he wanted to be a police officer in St. Louis because, “I just wanted to work in a big city. I wanted the full experience.”

Steve said that their son is known as their “Friday guy.”

He said that when a call comes in about 30 minutes before the end of the shift and the start of some time off, other officers might be willing to let the next shift handle it.

Not Colin. Steve said that Colin urges them to handle the call, which means additional hours after the end of their shift writing reports.

Steve said that Colin has said there are three things he wanted to do in life – “Be a cop, serve in the military and farm.

“He’s now a St. Louis police officer, he is serving in the National Guard and he’s raising a few pigs.”