The Vandalia Vandals made a fourth quarter comeback for the second week in a row, as they defeated the Roxana Shells Friday night, on the road, 28-17.

Vandalia got on the scorebard first, as at 5:48 in the first, Ryan Kaiser took the ball on a 49-yard run to the end zone, putting the Vandals up 6-0. The extra point attempt was no good.

Roxana came back as they drove the ball down to the 15-yard-line on a series of plays, and pushed the ball across the line to tie the score. The extra point attempt was good, as they took a 7-6 lead with two ticks left on the clock in the first.

As the second quarter began, the Vandals made a run downfield, to the 8-yard-line, when Matthew Hagy, on the keeper, scampered across the line for the score. Cody Stewart’s extra point attempt was good as it split the uprights and Vandalia took the lead, 13-7, with 8:37 to go in the half.

With time ticking down in the half, Roxana was on the move, however the Vandal defense made a stand at the 23-yard-line, and the Shells had to settle for a field goal, to close out the second quarter, 17-13.

“I thought Friday was a good hard hitting football game. The first half was kind of back and forth a little. We kind of hurt ourselves a little with the two turnovers and we had a little bit of trouble stopping their fullback. I thought holding them to a field goal late in the first half was a huge turning point in our favor,” said Head Coach Jason Clay.

Both teams’ offenses were relatively silent in the third quarter, but it was the Vandals that came to play in the fourth.

With 6:59 on the clock, Matthew Hagy telegraphed a pass to Nolan White who reached pay dirt, and Vandalia took the lead for good. The two-point conversion was good as Hagy kept the ball, and the Vandals jumped out 21-17.

Just less than five minutes later, The Vandals drove down to the one-yard line, setting up a Dawson McKinney run across the stripe, and the Stewart kick was true, for the 28-17 final.

“At halftime we made some adjustments defensively and shut them out in the second half. Offensively we moved the ball pretty well and our running game was stronger than last week. We have to clean up some of the mistakes so we can finish that drive in the third quarter. Fortunately our defense created the turnover and we were able to put a drive together for the go ahead score,” Clay said.

Hagy was the lead rusher for the second week in a row. With 15 carries and 61 yards. He also threw for 7 of 13, for 105 total passing yardage, for one touchdown and an interception.

Dawson McKinney had ten carries for 56 yards for one TD, and Kaiser had the other TD on two carries for 49 yards. Nolan White had the ball five times for 17 yards and Pierson Wilkerson had one carry for 6 yards.

On receiving, Carson Ruot had 78 yards on three receptions. Gaige Beall had two, for 18 yards, and White was two receptions for 9 yards.

The Vandals had 294 yards for the game.

On the defensive side, Tiler Worker had 12 assists and 3 solo tackles in the contests. Beall had 5 solos and 5 assists, including one sack for a 14-yard loss.

Gavin Mouser had 7 assists, as did Michael Bowles; Connor Ray had 4 solos and three assists; McKinney, 4 solo, 2 assists; White, 1 solo and 5 assists; Brody Hall, 1 solo and 3 assists; Lane McCormick with 4 assists, and Jaydon Lotz had 2 solo and 1 assist, including one sack for a one-yard loss.

The Vandals travel to Piasa Southwest, who is also 2-0 after a couple of off years.

“They are a team that is off to a good start after struggling the last couple of years. They like to run the ball first and look to have a couple of good running backs. We will have to stop the run first and try to make them look for their other options down the list,” Clay said.

“Defensively they will most likely play a 3-4 defense similar to what we saw against Staunton in week one. We will strive for balance running and throwing to keep them off balance. We also hope to keep improving in the special teams like in week two.” 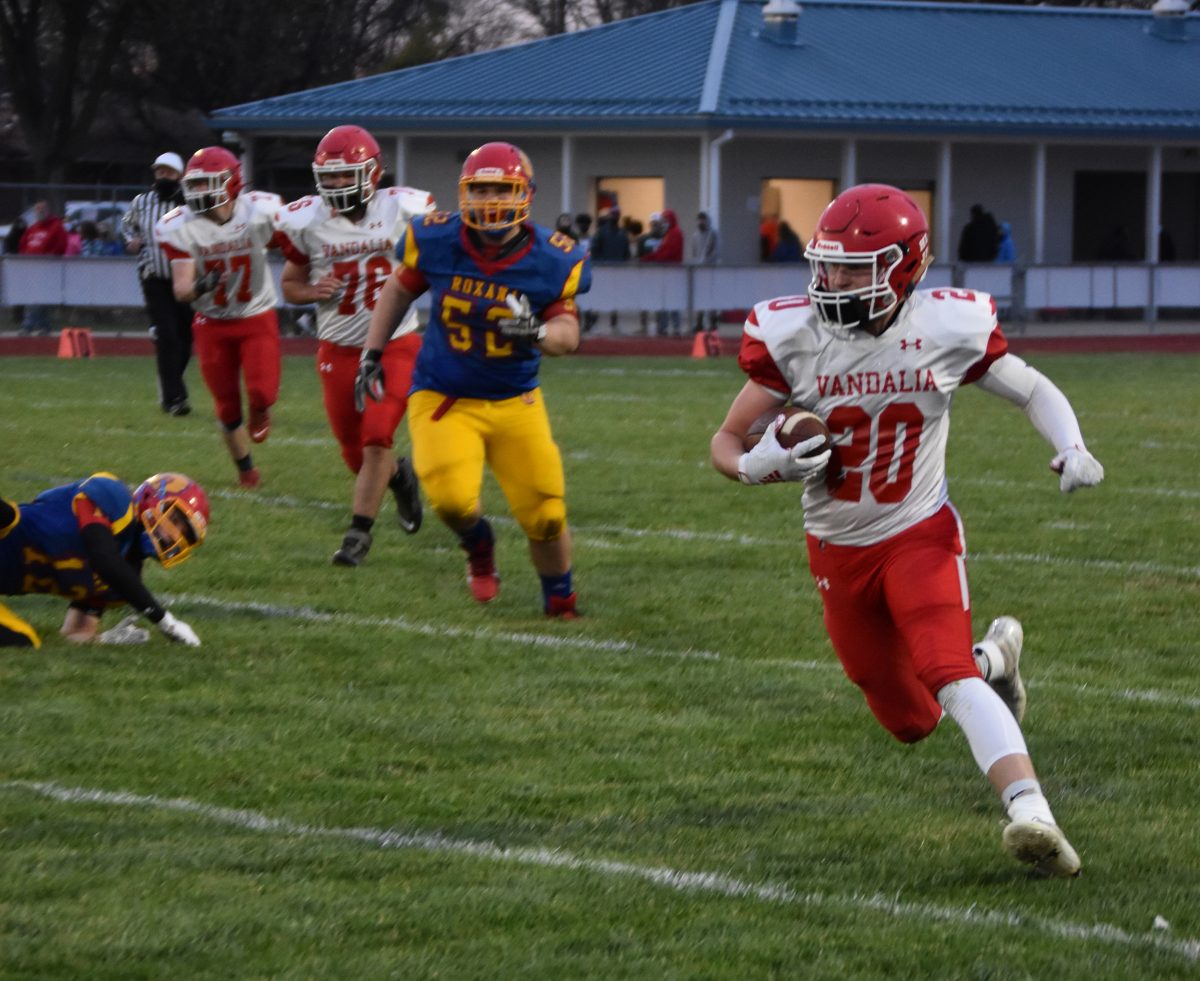 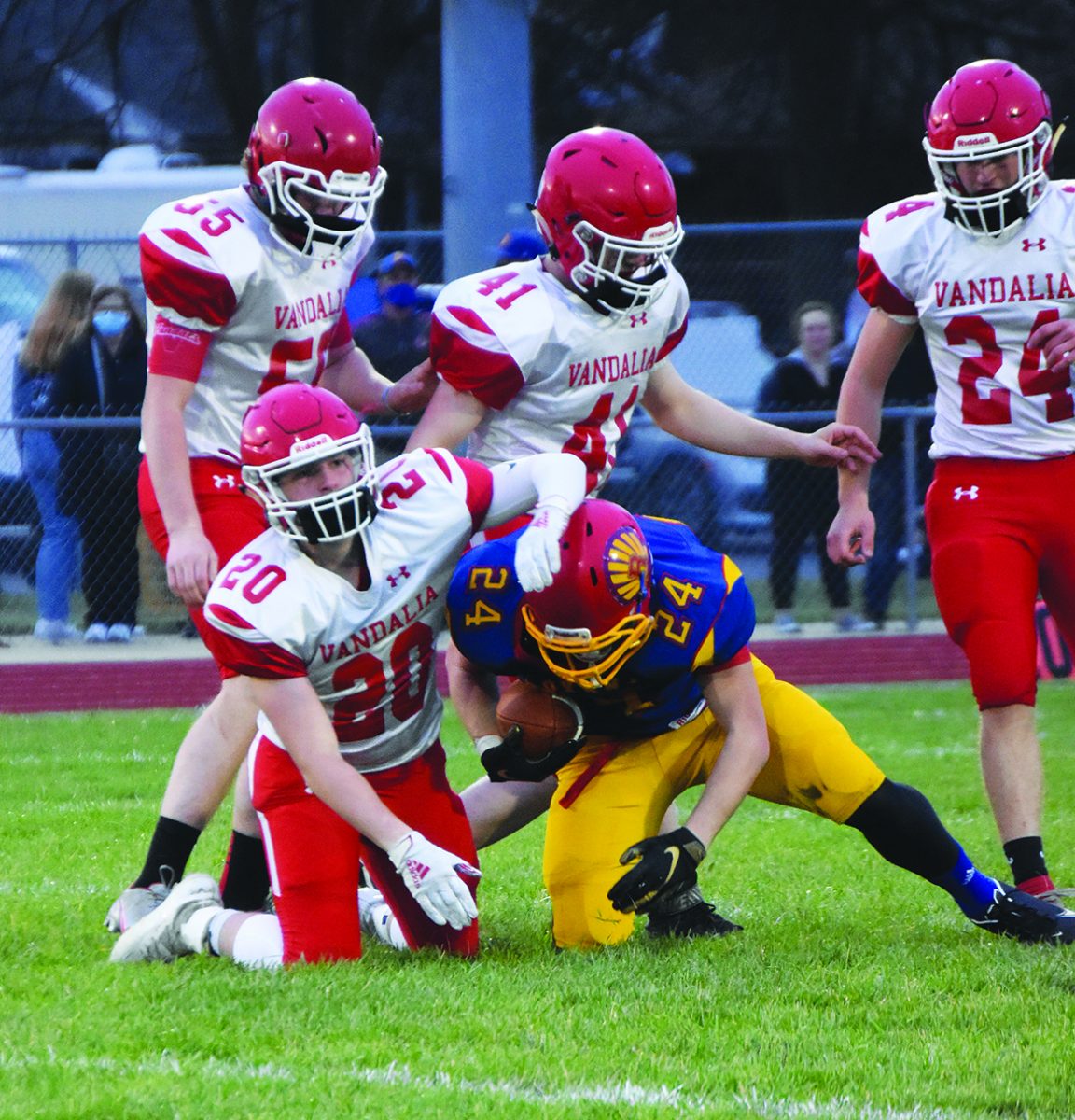 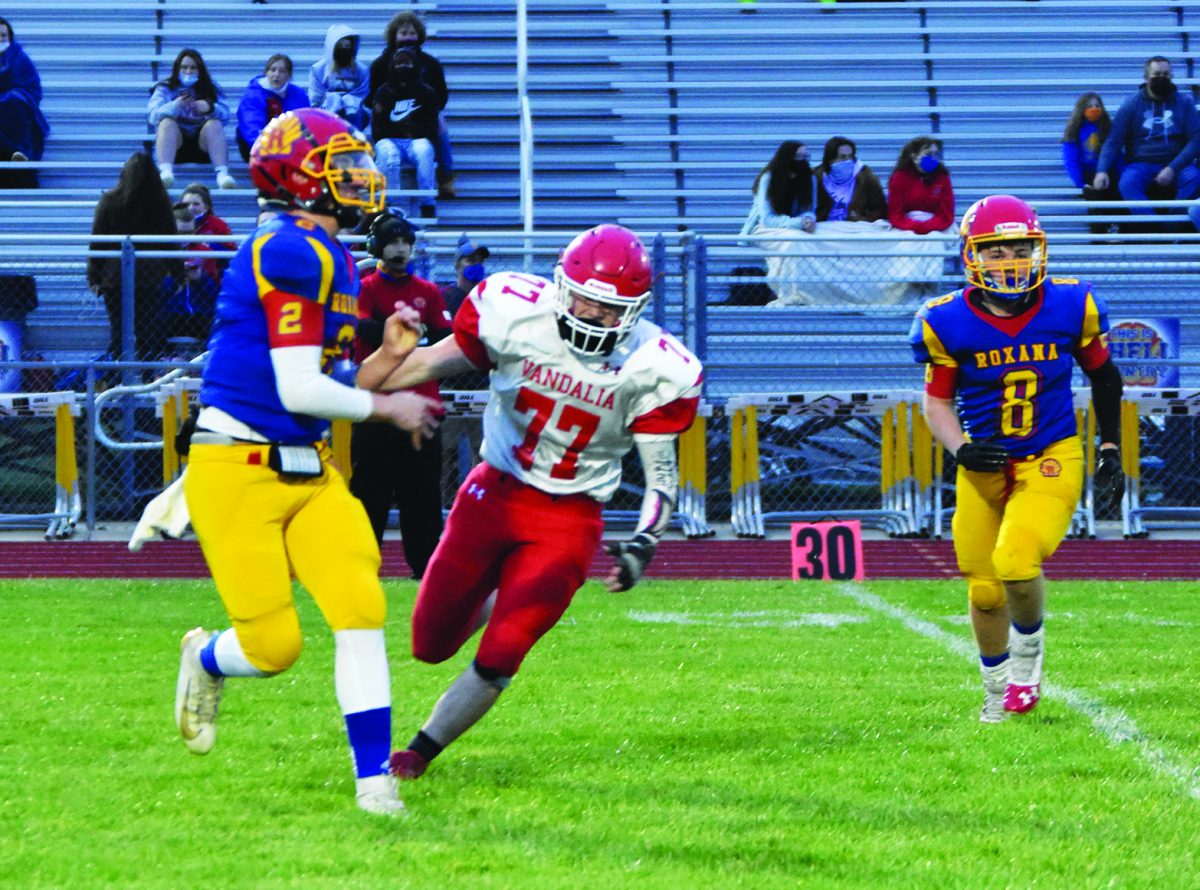 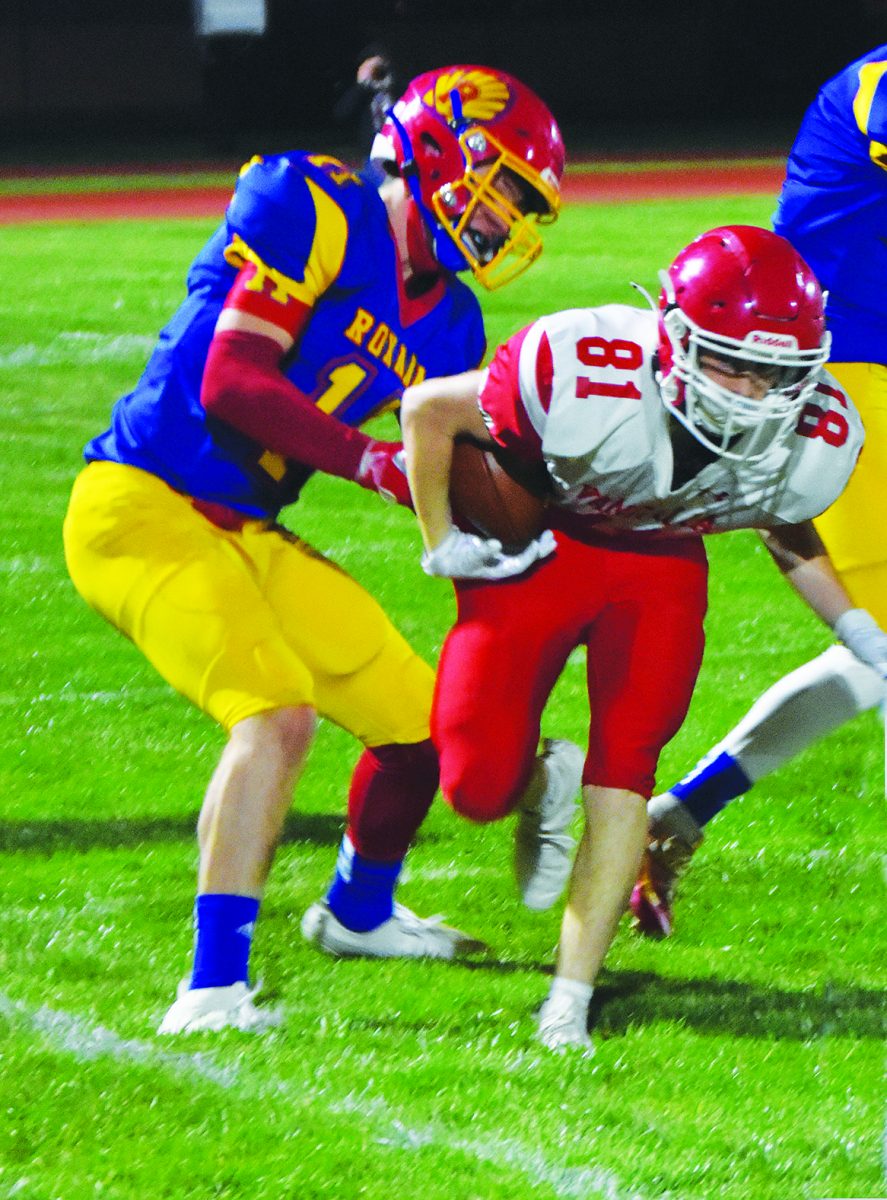 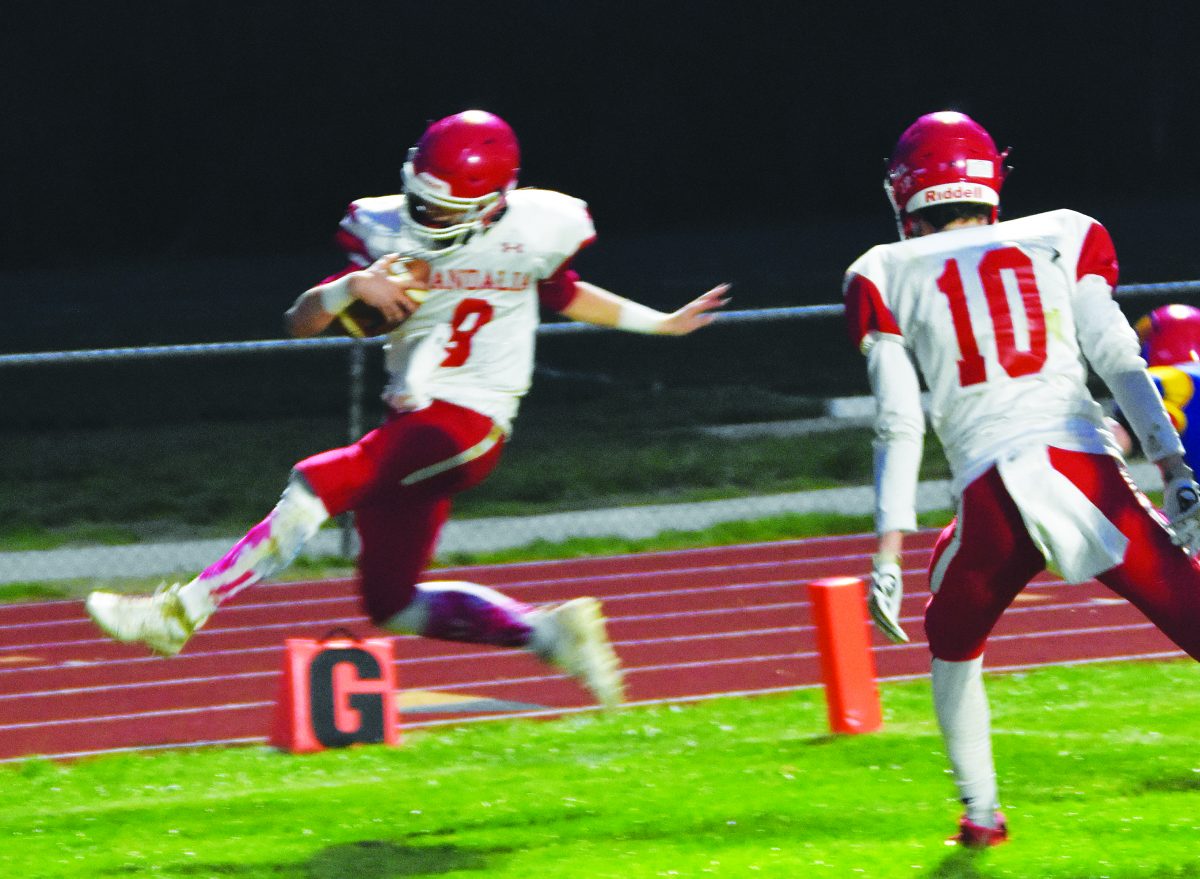