This week’s photo: These twins will celebrate their birthday this Saturday. They were born in a farm house on U.S. Route 51 in the middle of a flood, and the doctor had to use a row boat to get to their house.

They were raised in Vandalia, growing up on Willow Street. The girl is the youngest of the twins and they had three brothers. One twin still lives in Vandalia, and has five children and nine grandchildren. The other moved to Mt. Vernon, and has five children and nine grandchildren.
This week’s Scrambler: ti si efnot searie ot teg sineosrefgv naht senipomirs.
Can you unscramble it? If so, call The Leader-Union, 283-3374, by 5 p.m. next Monday.
Last week’s Scrambler: Faith is believing in things when common sense tells you not to.
Unscrambling it were:
Ruth Ann Garrison, Dan and Cheryl Willis, Ed and Doris Young, Donna Knebel, Roger Mosley, Wanda Green, Elizabeth Kasten, Verla Casey, Lois Jackson, Terry Martin, Sharon Boatman, Cy Locke and Mary Cripe. 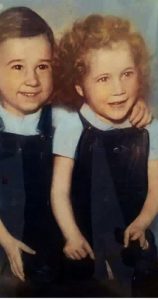