Christmas baskets were again provided through Fayette County Caring & Sharing, albeit in a different fashion due to the COVID-19 pandemic.

For the distribution of this year’s baskets in Vandalia, families were given their baskets in a drive-through manner, instead of walking through the Mother of Dolors Catholic Church Parish Center with volunteers.
And while the altered operations got clothing, food and Christmas toys as always, it didn’t have quite the same feel for a woman who helped start the program and has been part of it for the past 40 years, or for the families.
“I think they’re going miss it, though, coming in here,” Marlys Hayner said. “It’s the personal part that’s going to be missing.
“I’m going to miss it, too, not being able to see them and talk to them and hug them, but that’s the way it has to be this year,” she said.
Hayner was among the Fayette County Health Department employees who started the program in 1980, providing five Christmas baskets for needy families.
“It was just families that we knew needed it,” she said.
The program began to grow by leaps and bounds from there, with volunteers initially delivering baskets from the basement of Mother of Dolors Catholic Church.
“It was county wide,” she said. “They (volunteers) were driving to Herrick, Ramsey, Farina … and there were no cell phones back then. They were going only by directions given to them, and it was something like, people would say, you go over the last bridge … well, which is the last bridge.”
Hayner and her husband, Bob, headed up the program for decades, and Marlys continued to be involved after Bob’s death, only recently turning over the leadership role to Tim Daiber.
“If I had to manage a drive-through (distribution), I don’t know what I would have done,” she said. “Thank God I’ve got Tim – he’s got it all planned out.”
Though she’s no longer in charge, Hayner continues to help out, because of what she gets out of being around not only the families receiving baskets, but those who put the Christmas baskets together.
“I love working with the volunteers,” she said.
“We had new volunteers this year, some of them who experienced a personal loss in the past year, and I think it was good for them to be here, it was therapeutic,” Hayner said.
“There was a woman who had a great loss last year, and she just came out to say that we helped her last year and she came back this year to give back.
“Some of them came back two or three days in a row, people who hadn’t been here before to help out,” she said.
“We had people from Octochem come in this year. That company really went all out,” Hayner said.
“We had people from there come in two days in a row, and they sent people in shifts, every two hours,” she said, adding that Octochem also supported the project with employee donations.
“The chaplain from the (Vandalia) correctional center came,” she said. “She brought a lot of food and money, and she stayed all day – the more she got into it, the more she liked it.
“We had a lot of new people who really enjoyed it,” Hayner said. “We’re all here for different reasons.”
Daiber said there were some regular volunteers, including elderly workers, who didn’t participate this year, and he believes that that was because of the pandemic.
They also lost some of their volunteers through the school situation, though Hayner said that the Okaw Area Vocational Center did send some students to help out.
Daiber said they also usually have Scouts help out, but they were unable to do so this year.
The amount of donations, particularly food donations, were down this year, largely due to the COVID-19 pandemic, but Daiber said there was enough to provide what was needed.
Some of the shortage was due to the fact that Vandalia students were only in school days a week, but Daiber said that both Vandalia Elementary School and Vandalia Junior High School did present a good amount of food donations.
“Our food donations, and toy, donations were down about 40 percent each, but because there were fewer baskets, we were able to get by,” he said.
Actually, he said, “We sent some toys to Brownstown and St. Elmo, and some food to Brownstown.
“And, we ended up giving about 12 boxes of food to the food pantry,” Daiber said.
“We’ve had individuals bring in food and toys in past years, and I don’t really remember anyone doing that this year,” he said.
He said that request for Caring & Sharing baskets was down by about 100 county-wide, and about 50 in Vandalia, but both he and Hayner don’t really have an explanation for that.
“I don’t know, if it’s maybe because people have moved or more people have jobs this year or receive unemployment benefits,” Daiber said.
As far as the drive-through distribution process, Daiber said that volunteers “told me it went great.”
While she was unable to hug and talk to many of those receiving baskets, Hayner was there greeting and speaking them.
And while the pandemic may have caused a distribution system that could be used in the future, Hayner hopes that the recipients can return to life as we normally know it sometime soon.
“It’s been a bad year, for a lot of people, for a lot of reasons,” she said.
“I just give people hope that the next year will be better.
“The first Christmas gave us hope for the world, and I hope this little Christmas that we can give them will give all of these people hope,” Hayner said. 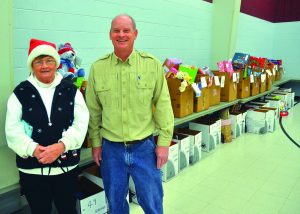 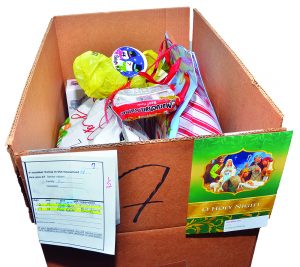 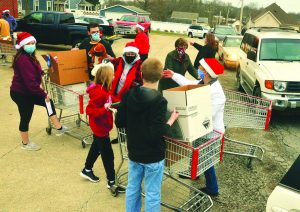