A busy five-day period for the Vandalia Volunteer Fire Department was bookended by large field fires and included a house fire.

That stretch of fire calls started mid-afternoon last Wednesday, when the VVFD responded to a field fire north of Vandalia’s western Interstate 70 interchange.
Fourteen firefighters responded to the fire, and they were at the scene of that fire for about 90 minutes.
While they were fighting that field fire, Vandalia firefighters were called to provide mutual aid assistance to a barn fire in the Farina Fire Protection District.
They were summoned for assistance at 4:07 p.m., and the 14 firefighters responded along with members of the Brownstown Volunteer Fire Department.
They were at the scene of that fire for about 90 minutes.
Also on Wednesday, firefighters responded to a brush fire at 2400 Avenue and 700 Street. Seven firefighters were out for about 25 minutes.
On Friday, the VVFD responded to a combine fire at Draege Farms south of Vandalia. Ten firefighters responded, and they were out for about 35 minutes.
On Saturday, shortly after 1:30 p.m., the VVFD was called out for a field fire at the Lach residence off of VanZant Avenue and Main Street, south of Sloan Implement.
Due to high winds, that fire spread south the railroad tracks and north of several fields of corn and corn stubble.
In addition to mutual aid assistance from the Brownstown and Ramsey fire departments, the VVFD were aided by Raymond Woolsey with a Woolsey Brother Farm Supply nurse truck for water, Draege Farms, and David Stokes and Dayton Scott with tractors used to disc around the fire areas to help prevent the spread of flames.
In addition to crops lost in about 100 acres, the fire damaged a number of railroad ties that will require replacement.
Firefighters were at the scene of the field fire for more than 3½ hours.
At 7:19 p.m., firefighters responded to a fire at the home of Cory Klitzing, 119 E. Main St., after a neighbor noticed smoke coming from the house.
Mark Meadows, VVFD chief, said it appears that the fire started in the living room in the area of a loveseat.
Firefighters were able to knock down the fire quickly, with quite a bit of fire damage in the living room area, and smoke and water damage there and in other areas, Meadows said.
Klitzing was not at home at the time, as he has been working out of state.
An investigator with the Office of the State Fire Marshal was called to the home, and Meadows said that the investigator determined where the fire started but was unable to determine a cause.
The last firefighters left the scene shortly after 11:30 p.m.
Firefighters were called back to the field fire at Main Street and VanZant Avenue on Sunday afternoon and were out for more than an hour.
On Sunday evening, VVFD members responded to a report of a smoke-filled home on North Fifth Street. They used an exhaust fan to clear smoke from the home, and were out for about 15 minutes. 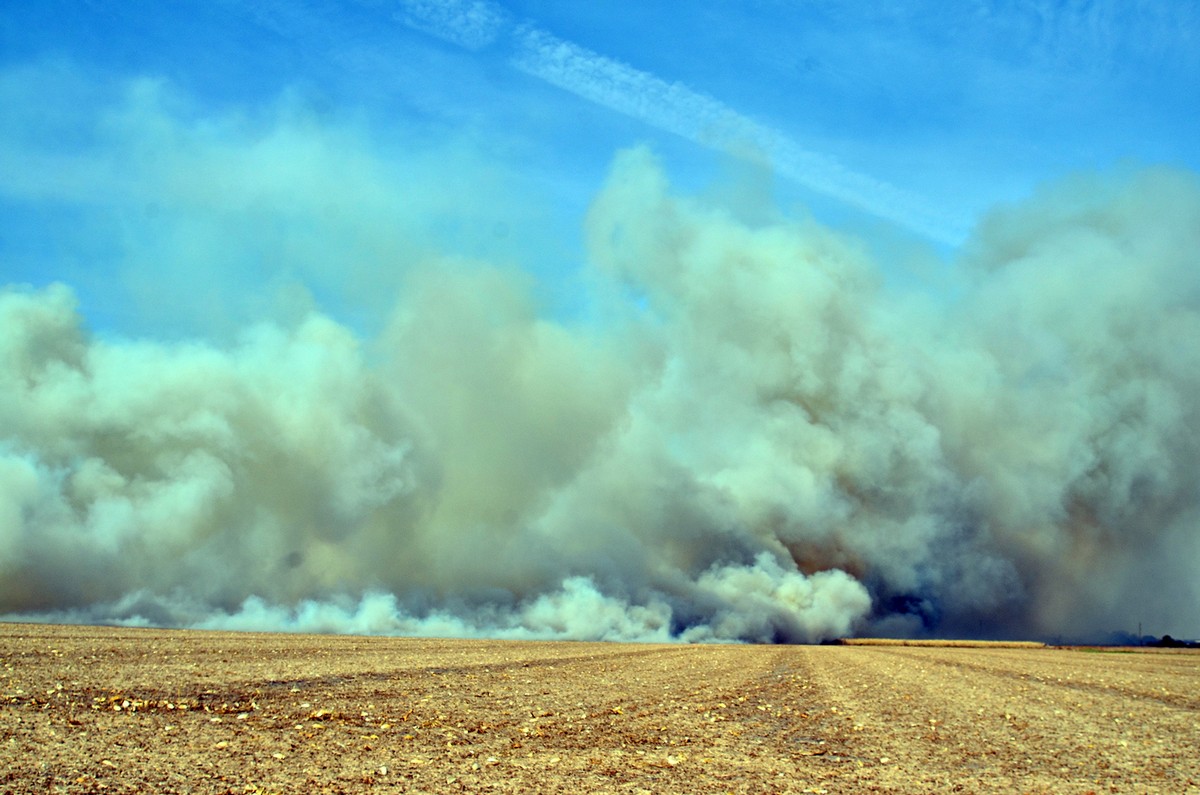 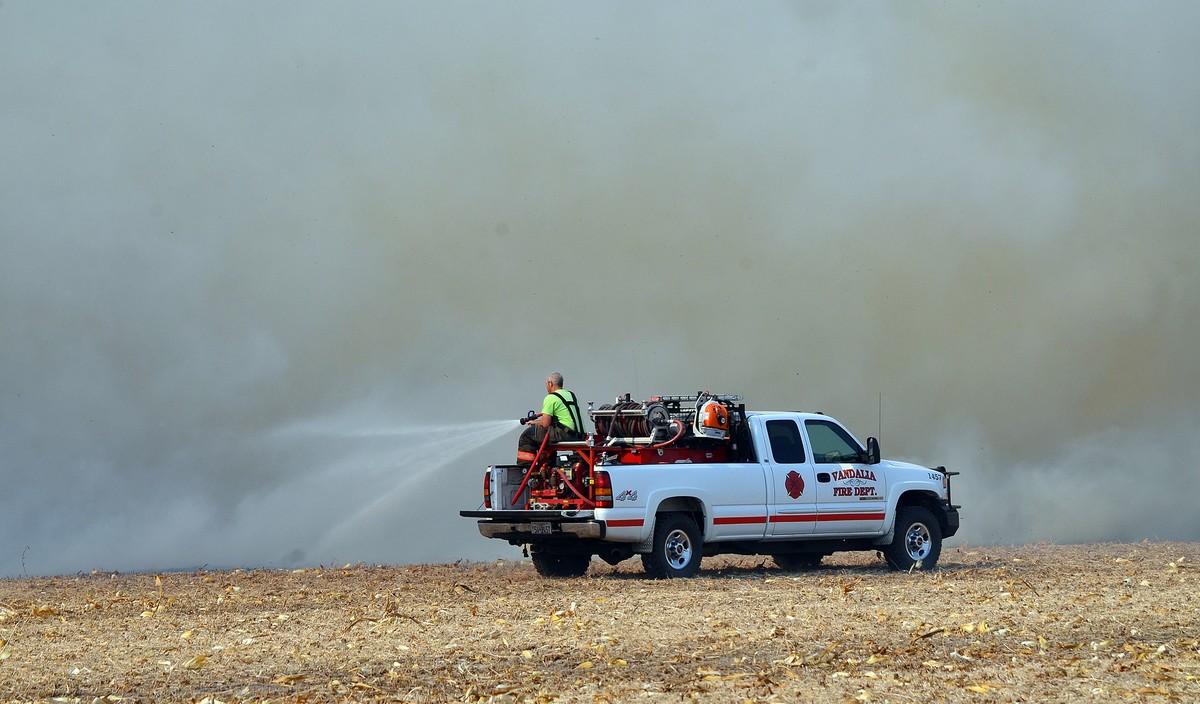 With Chief Mark Meadows at the wheel, Vandalia Volunteer Fire Department member Kirk Forbis attacks the large field fire from the back of the department’s brush truck on Saturday afternoon. 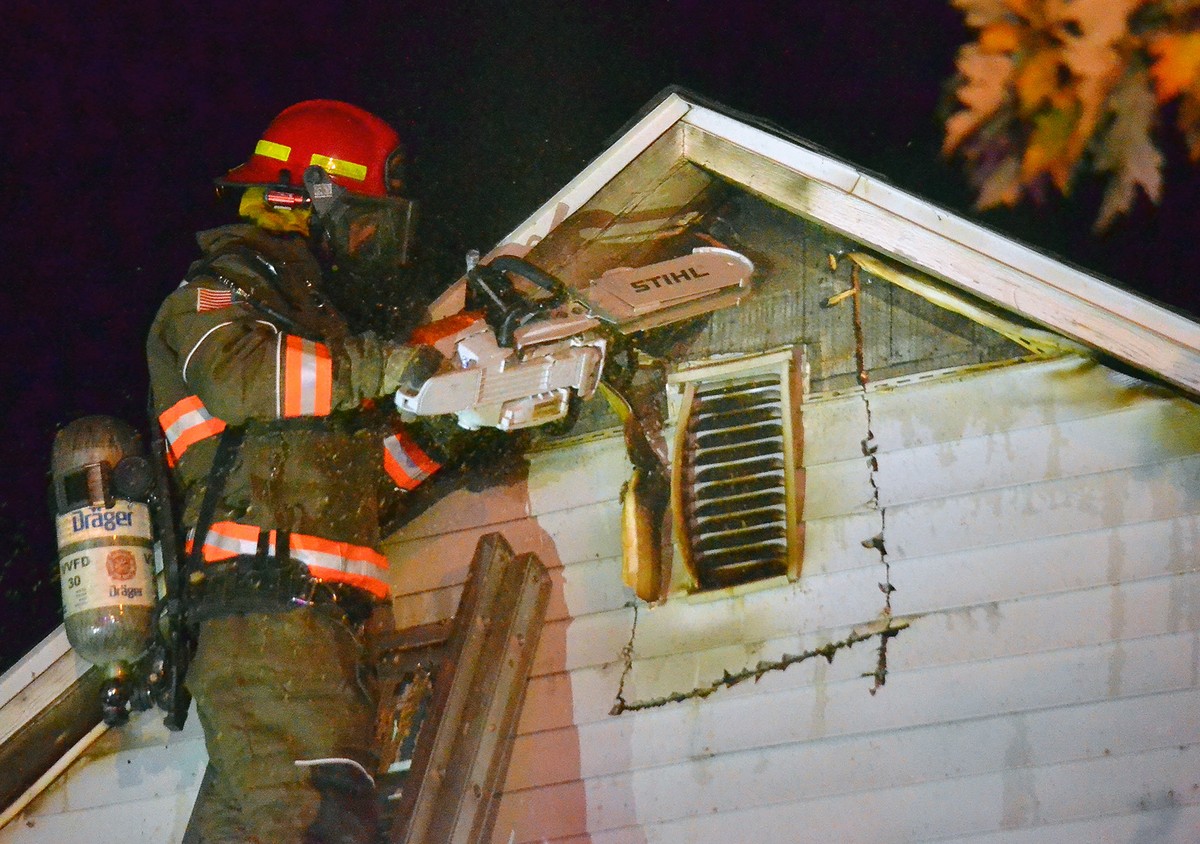 Jordan Williams of the Vandalia Volunteer Fire Department uses a chainsaw to cut a ventilation hole as firefighters battle a blaze on East Main Street at First Street on Saturday night.

Olde Tyme Christmas is a success!