Less than 24 hours after Fayette County’s sheriff and chief deputy gave reasons for interstate patrols, an arrest supported their reasoning.

Shortly before 1 p.m. last Wednesday, Deputy Carson Thomas stopped a vehicle for allegedly traveling 74 mph in the 55-mph construction zone between Vandalia’s two I-70 exits.
Sheriff Chris Smith said that Thomas had the dispatcher run the license plate and then approached the driver. Returning to his squad car, Thomas learned that the plate was reported stolen.
At that point, he was told to not approach the driver again until Smith and Chief Deputy Chris Palmer arrived on the scene for backup, Smith said.
The officers then searched the vehicle and found an AR 15, 959 rounds of ammunition and a Glock pistol. Palmer said the Glock was in the console of the vehicle, loaded with a bullet in the chamber.
Smith said that Tion I.J. Blair, 28, of Florissant, Mo., was taken into custody without incident on preliminary charges of unlawful use or possession of a weapon and armed violence.
On Friday, the office of State’s Attorney Joshua Morrison charged Blair with two counts of armed violence, a Class X felony punishable by up to 30 years in prison, and a stolen vehicle charge, a Class 1 felony carrying a maximum penalty of 15 years in prison.
One of the armed violence charges alleges the possession of a Glock 19 handgun, and the other alleges that Blair possessed a SWAT AR15 rifle. Both allege the possession while Blair was in possession of a stolen truck.
Blair made his first appearance in court, by Zoom, on Friday morning, at which time Judge Marc Kelly appointed Public Defender William Starnes to represent Blair.
Blair’s bond was set at $40,000, and a preliminary hearing was set for Nov. 2.
Last Tuesday afternoon, in talking about again conducting interstate patrols, Smith said that when he ran patrols in Bond County, some vehicle stops led to arrests on charges more serious than speeding.
During one such stop, he said, a driver was wanted for murder and one of the passengers for attempted murder.
Another stop uncovered $1.67 million worth of cannabis.
After listening to Smith and Palmer, the county board voted 8-1 to amend the current budget to include interstate patrols during the current fiscal year and to consider including the expenses and revenues for the patrols in the new budget.
As a result of that action, the sheriff’s department was able to move Thomas from part-time to full-time status, with him continuing to focus on interstate patrols.
Smith said last Wednesday’s arrest supports the belief of both him and Palmer that there’s a good reason to patrol the interstate.
“The criminal activity that goes past us on I-70 is extremely high,” Smith said, “and these are the same people who are going to get off one of our exits and come into our community.
“I firmly believe in the program as a deterrent, I really do,” Smith said. 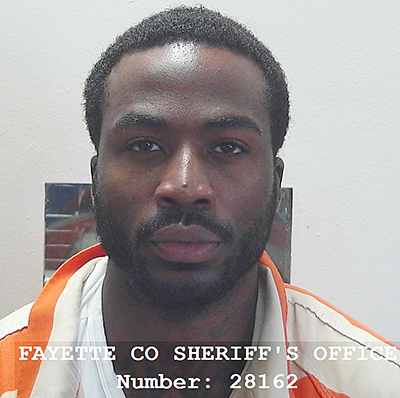