The system that the Fayette County Farm Bureau used for this year’s crop survey was different from past years, and not one it would like to repeat.

However, the new system, due to the COVID-19 pandemic, did produce considerably more samples to derive yield estimates.
This year’s county average for corn is 180 bushels per acre, and for beans, it’s 59.86 bushels per acre, said Fayette County Farm Bureau Manager Katie Cayo.
That’s up from last year’s estimates of 165.7 for corn and 47.5 for beans.
In the past, the Farm Bureau had six teams canvass the county. This year, due to the pandemic, participants “went out on their own and got survey results based on a township event.
“I have 16 directors, so I’ve got almost 16 sets of averages basically,” Cayo said.
“In the past, there’s been only a handful of yield estimates gathered for each group,” she said.
“But this year it’s 10-plus for each group, which makes a really good, solid county average when you really put it all together,” she said.
While this year’s system produced a more comprehensive look at the county’s crops, the Farm Bureau is hoping that it can go back to the old system in the future.
“They (Farm Bureau directors) like, more people involved, the ag businesses and the others. We invite those people out to see how it works, and what we’re doing.
“So, we missed that aspect, which I think they’re going to want to keep.”
In addition to Farm Bureau directors, those participating included employees of South Central FS and members of the Farm Bureau’s Young Leaders group.
“I also got the South Central FFA kids, who went out around in their area, Farina and St. Peter,” Cayo said.
As could be expected, the weather played a big factor in producing higher yields than last year.
“Last year, we got all of our rain in April and May, and everything was planted the first of June,” Cayo said.
“Then, the moisture kind of shut off a little bit,” she said. “We didn’t get hardly anything, through the summer, which is when the corn and the beans are really growing.
“So, that really affected things last year,” she said.
This year’s conditions were “significantly better.
“We did have a little bit of rain at the beginning, but guys were able to get in the field, so we had a lot of April-planted corn,” Cayo said.
Bond County’s average is 190 bushels per acre, “so I think Fayette County didn’t get as much rain in the summer months,” she said.
Interestingly enough, both the lowest yield estimate (135 bushels per acre) and the highest (248 bushels per acre) “were in the northwest part of the county, Hurricane (Township), South Hurricane and Ramsey,” Cayo said.
The lowest yield estimate for beans was 30, in the southeast part of the county – Wilberton, Lone Grove and Wheatland Townships.
The highest estimate for beans, 90, came from the southwest part of the county – Seminary, Pope and Kaskaskia townships.
What, if anything, that’s needed for this year’s crops, Cayo said, “depends on who you talk to, because some got rain and some didn’t.
“Maybe another shower wouldn’t hurt,” she said. “I’m not talking about inches upon inches.
“It doesn’t need to get dry; it needs to get dry here in a couple of weeks, so we can get in the field, but a little bit of moisture would not hurt things,” Cayo said.
“I think we are right on schedule,” she said.
“There’s going to be some guys getting in the field by the 15th, I guarantee it, because we have some of the early-April planted corn.
“Beans aren’t quite there yet. But they have some early-April payment stuff, and that’s going to move right along,” Cayo said. 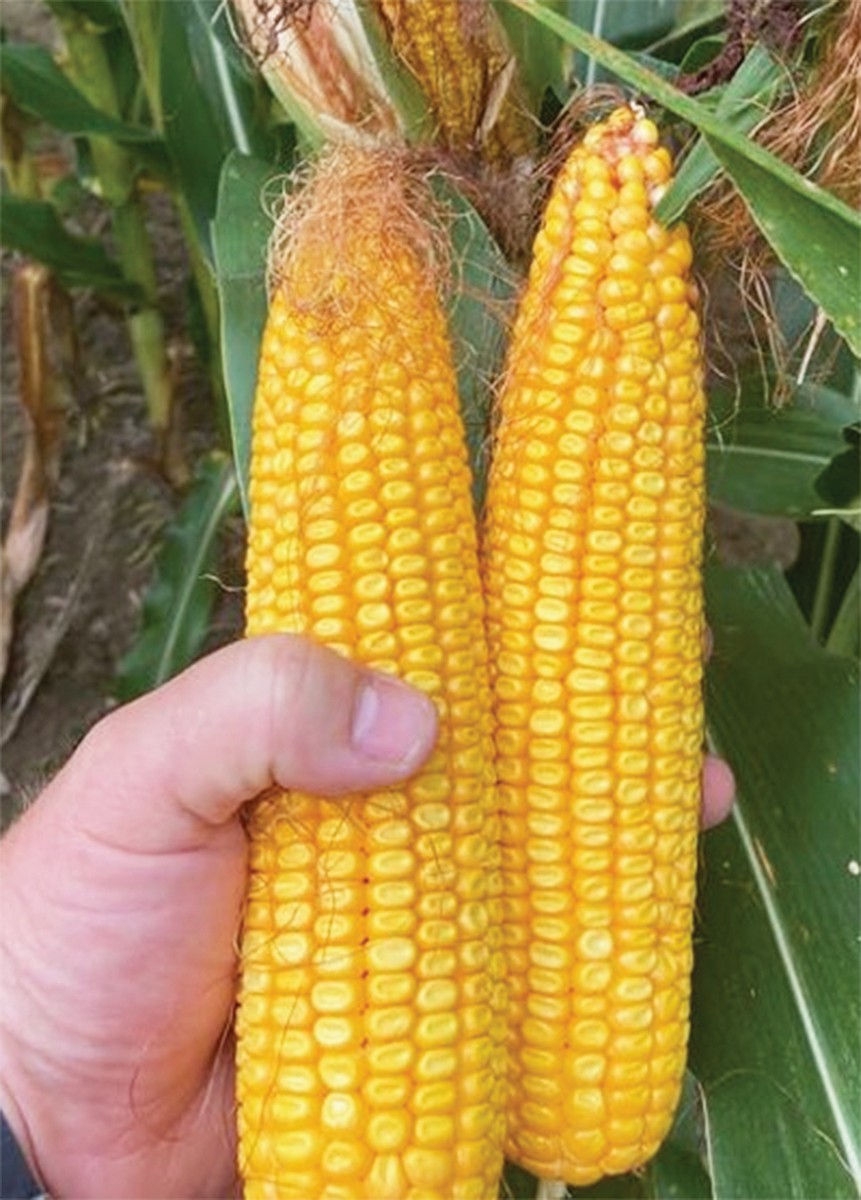 This photo, provided by Clayton Gathe, shows a couple of ears of corn from southeast Fayette County.