A late change in the Charters Patio schedule brought a 1980s pop star to Vandalia on Sunday evening.

Tiffany, who is best known for her remake of the Tommy James and the Shondells hit, “I Think We’re Alone Now,” sang that and some of her newer songs before the largest crowd yet at Charters Patio.
Tiffany’s appearance was made possible through Kyle Anderson of Willms & Associates Insurance Agency.
She was scheduled to perform before a small group at a farm in rural Pana, but after complications arose, the host asked Anderson about having Tiffany perform at Charters Patio.
That was a good fit for Tiffany after the COVID-19 pandemic hit.
“I have a huge tour that was planned this year, festivals and things like that, big venues, and I’ve been working up to that, with my new sound and just working really hard on the road,” Tiffany said.
“I’ve been like, literally, on the road for about four years, nonstop, and it felt really strange, when COVID hit, to be, how am I going to go home,” she said.
But, Tiffany said, “It’s kind of nice, because when you travel so much, I get to see extended family and friends that I haven’t seen in forever.”
Touring in smaller communities than what she’s used to, such as Vandalia and Champaign, “it’s a big kick – it’s a show, but it’s also a holiday.
“I get to see all kinds of people, and I love different cultures and communities, small communities,” Tiffany said.
“If I can go and be there the day before and just go to the local restaurants or diners or pubs, it’s kind of, for a songwriter, it makes really good stuff.
“These are our first shows, actually, this weekend, so you guys are in the first shows I’ve been doing,” Tiffany said.
She said that she’s been doing some live streaming out of Nashville, “keeping it going, keeping the momentum going, keeping the new songs going.
“For me, as an independent, you have to tour with every project,” Tiffany said, mentioning that she is releasing a new album next year.
“We’ve been doing a lot of stuff, and it was really my heart’s desire to continue to do live music,” she said.
Tiffany said she took a break of about four years, in her early 20s, after the birth of her son, Elijah.
“I wanted to experience that (time with her son), but that’s when I started to write songs and work with band members and explore a different side of me and what else I had to offer,” she said.
“I went into holistic medicine a little, I started experimenting with oils and bath soaps and bath salts, and herbal remedies. So, I kind of took my time to educate myself again, as a new mom, but also, what else do I have in common with my fans and what makes me really tick as a person.
“So, these are things that COVID probably really brought out in me,” Tiffany said.
She said that she has a cooking club, “where we do live streams, I love to cook with you, send you all of the recipes, like a little rock and roll mother, you know, like Martha Stewart,” she said.
“So, we will continue to do Tiffany takeovers, where I come in and, you know, work with a restaurant or something and kind of do the dishes my way, maybe three different entrees my way and offer a mini-concert.
“What I’m going to be doing today lends itself to acoustic stuff,  shadows new album. It is really full band, it’s kind of in your face, it’s a little bit of back a throwback to maybe the Ramones, Blondie, with a very current Foo Fighters, layered guitar sounds, so, modern production 80s flair fun.
“Because, you know, it was fun, that music was fun. I think, you know, nowadays, unless you’re listening to classic rock, pop radio is really for, I hate to say this, but younger generation,” she said.
“We get stuck in, you know, adult contemporary, which is lovely, but there’s not a lot of pickup there. And so you kind of go back to the 80s, and there was just something magical about that style of music,” Tiffany said.
“Right before COVID, we started recording some acoustic versions of ‘Pieces of Me,’ the new album. We had the studio time we had the musicians, and Mark, my producer, said, since we have everybody here, why don’t we do something, different break it down, and let’s just do an acoustic thing.
“And that ended up being a great gem, because when COVID hit, we wanted to offer that as a special project to the fans, so we’ve released vinyl with it, which I’m really excited about, because vinyl kind of rocks
“I love it – acoustical is the best. It shows the passion behind the music, so, tonight, what you’re going to get today is one of a kind.
“When you have bigger production, you have your cues, all that energy has to exude out to the very last person in the arena.
“So, when you have it so personable, I can talk, people say funny things, I interact, you know, you take your time,” Tiffany said.
“I love the bigger shows, because it’s a nice problem to have, (but) I can’t really just stop in this big production and talk to somebody.
“There is such a romance with what I’m doing, you know, the intimate evening,” she said. 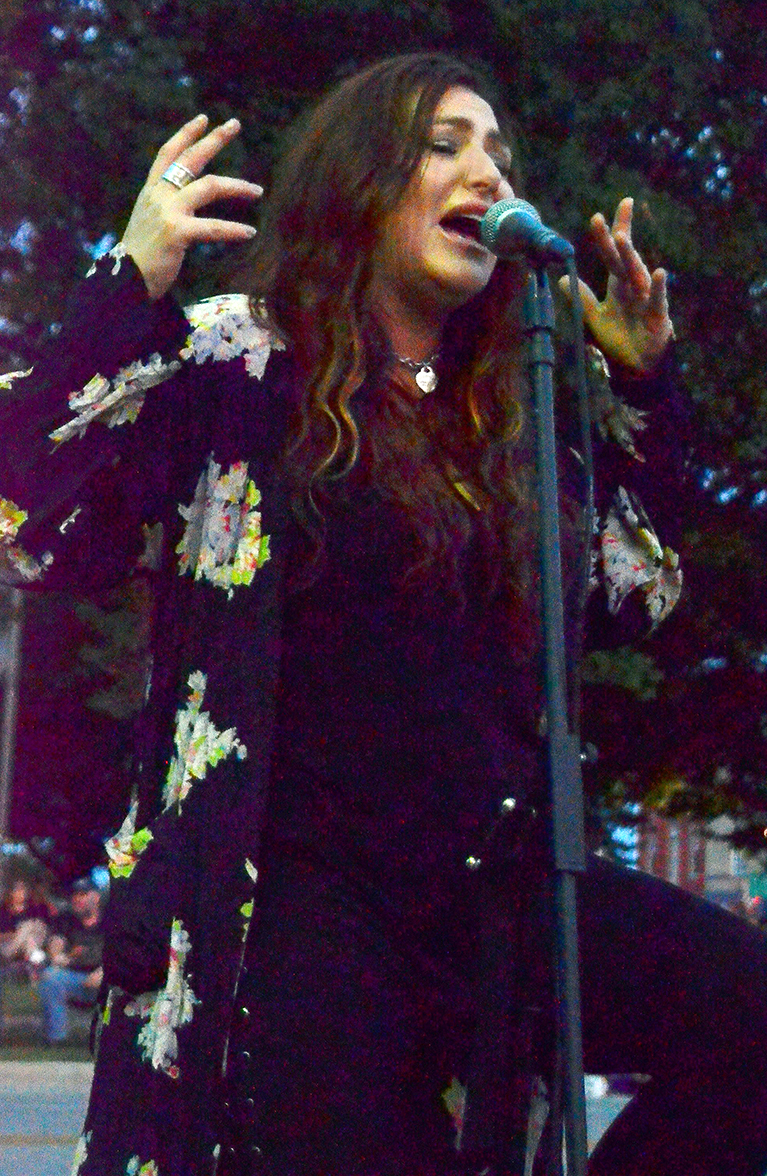 Tiffany performs in front of a large crowd at Charters Patio on Sunday night. 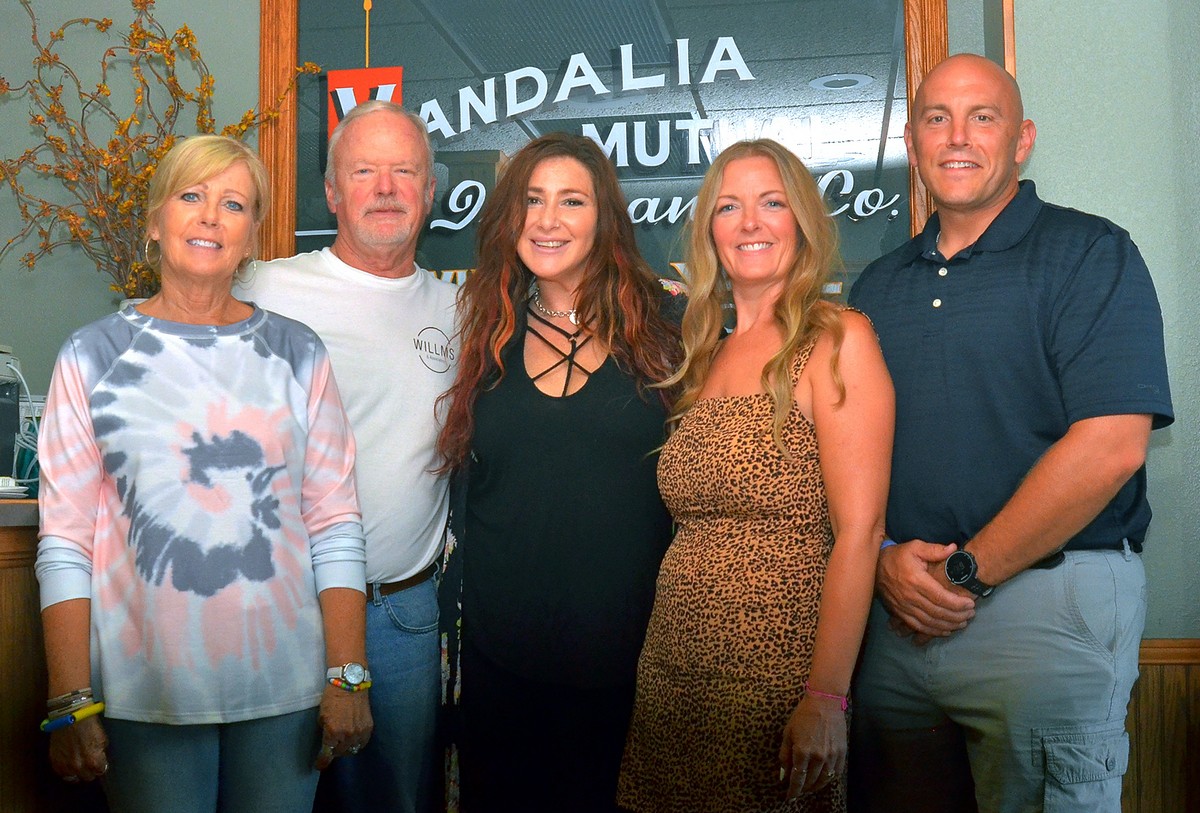 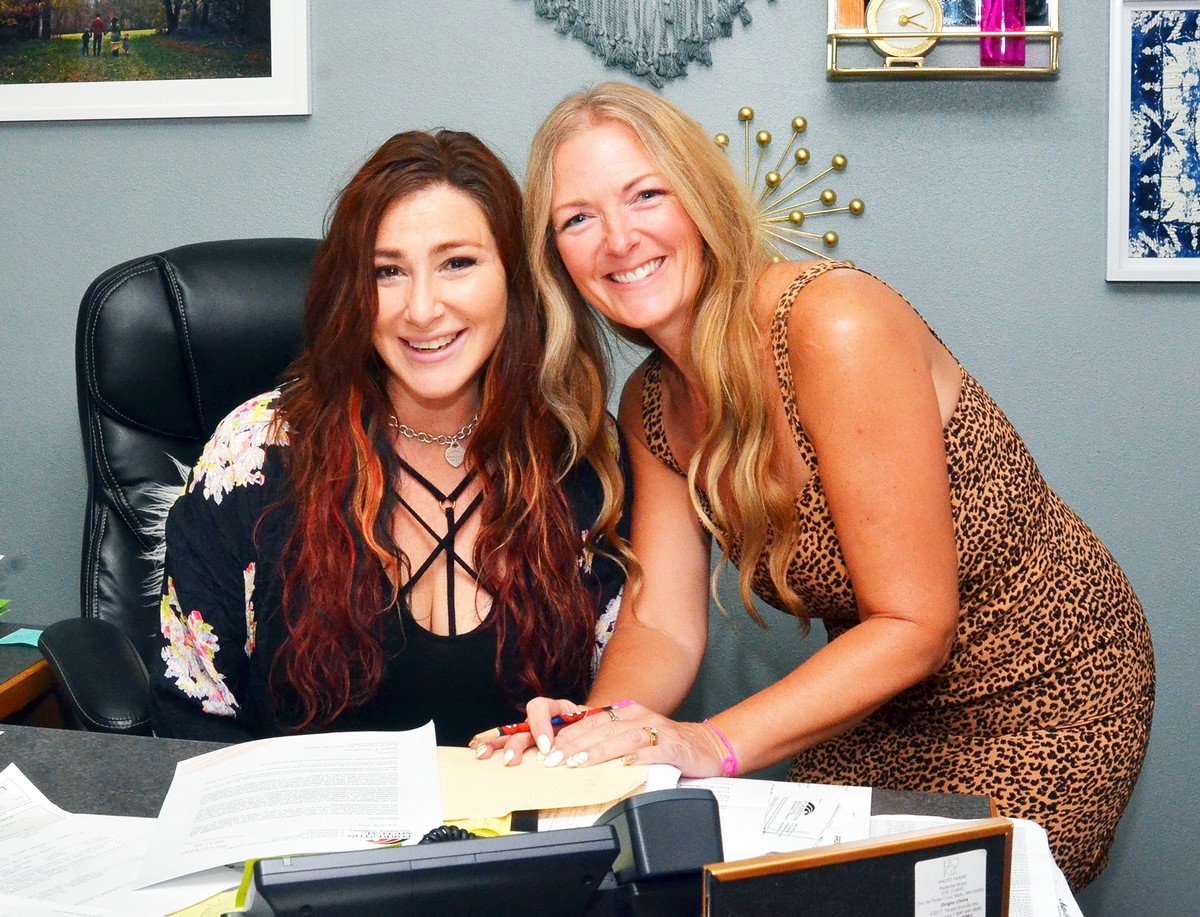 Tiffany and Keri Holding are pictured in Holding’s office at Willms & Associates. 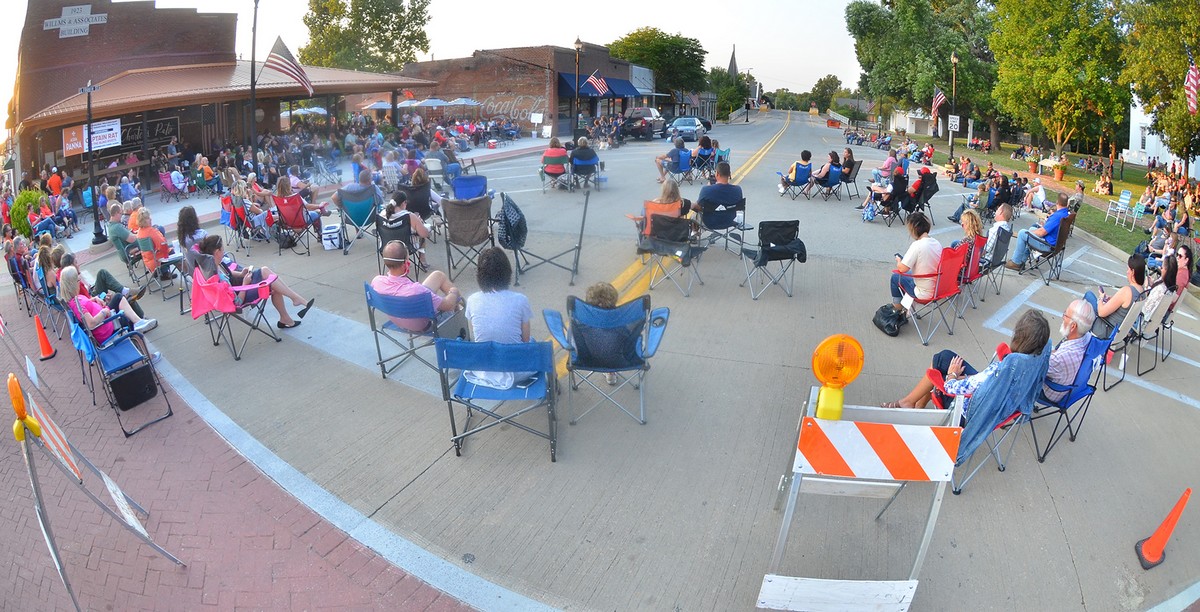 Tiffany drew the largest crowd yet for a performance at the insurance agency’s Charters Patio.