Those who continue to believe that the coronavirus is a hoax, something that’s political or just like the flu should talk to Jodi Craycroft.

Craycoft contracted the virus at the beginning of July and, two months later, is continuing to recover from her bout with it.
“I have never been so sick,” she said. “I would rather give birth to triplets.”
Craycroft said she knows “exactly when I got it.
“Mine was traced to a person who lives in Effingham,” she said.
“It was my fault, because we did not have masks on,” Craycroft said about a customer’s visit to her hair stylist salon on West Randolph Street.
That was on Friday, July 3.
On Sunday, after lunch, she told her husband, Geoff, “Man, I’m tired – I’m going to lay down and take a nap. And I never take naps,” Craycroft said.
“At first, I thought it was the flu, because the first symptom was that I was very tired,” she said.
“It hit me like a brick wall,” she said.
“Monday morning, I got out of bed and I told Geoff, ‘I’ve got to call the doctor today.
"I’ve got some kind of bug,” Craycroft said.
During her visit with Dr. Brian Dossett, “He thought I might have pneumonia, because he listened to my lungs.
“He sent me to the hospital for blood tests, and he said, ‘I’m going to have them administer a COVID test, just to be sure, for your safety.”
She was tested for coronavirus at SBL Fayette County Hospital that Monday afternoon and learned on Saturday that she had contracted the virus.
Prior to that, on Wednesday, the Effingham County Health Department notified her that she had been in contact with a woman who had tested positive for coronavirus. “Just before that, she (her Friday customer) and told me (she tested positive).
“I just got progressively sicker all week,” Craycroft said.
During a second visit, Dossett asked whether she wanted to try taking hyrochoroquin.
She told Dossett, 'I’ve got to have something.' I was so sick. I was sleeping something like 17 hours a day.”
That pill did the trick, she said, recommending it to anyone with the virus who is offered it.
She had three visits with Dossett prior by the end of last week, and her fourth on Monday.
While Craycroft is still in recovery mode, she can recall everything she has felt during her bout with the virus.
“I’ve had every symptom they have put out there,” she said.
“They talk about being in a brain fog – that is a real thing.
“The worst symptom I had was, one morning, Geoff helped me to the shower, because I was so weak, I could hardly walk,” Craycroft said.
In the shower, “I turned around to rinse the back of my head, and when the water hit my back, it took me to my knees. That’s how sore my body was.
"I’ve never been beaten before, but I can imagine that’s what it would feel like. I felt like somebody through the night had beaten me with a baseball bat I was so sore,” she said.
“I had a cough and it was different than anything I’ve ever had, an annoying cough,” Craycroft said.
She also lost her senses of smell and taste.
“I still can’t smell anything,” she said, adding that she realized that when her husband had to tell her that they had an onion go bad.
As for taste, Craycroft had a cheeseburger from a local restaurant and Geoff asked her if it was all right.
“I told him, ‘I guess it’s fine,’ she said. “He said, ‘It has cheese on it.’ I hate cheese and I didn’t even notice it.
“It’s weird not being able to taste,” she said.
Craycroft said that she also lost weight and “was shaking like I had Parkinson’s Disease. I’d have to hold on to the wall I was so bad.”
And that brain fog? “I feel like a year’s gone by and I wasn’t here for it.”
For those who think that the coronavirus is not something real, something serious, Craycroft has a response.
“It’s a joke amongst people who had COVID and had it bad, because a lot of people will say, ‘Oh, I think I’ve already had that. Yeah, I was so sick last winter and I was just really sick. I’m sure I’ve already had it.
“Well, let me tell you what – if you have it, you know it, because it’s like nothing you’ve ever had.
“People need to take it seriously,” Craycroft said.
She has words of praise for those who have helped her through her illness.
“I cannot sing Dr. Dossett’s praises enough,” she said. “His whole office has been wonderful to me through this.”
Dossett’s initial checkup was done outside. “It was raining, and he’s examining me while trying not to get the papers wet. I love that man,” she said.
Craycroft also praised the Effingham County Health Department for its assistance, and has especially good words for the Fayette County Health Department.
“I’m telling you, the health department here is so wonderful,” she said. “They are so overwhelmed right now and still doing a great job for people like me.”
Looking back on her stint with the coronavirus, Craycroft can see how it has changed her life for the good.
“Not to sound silly, but there’s been some good come out of this, because it’s strengthened my marriage.
“When somebody has to take care of somebody who’s that sick – I appreciate my husband so much more now,” she said.
“I didn’t realize how lucky of a person I am to have such a good husband and family, even my extended family,” Craycroft said. 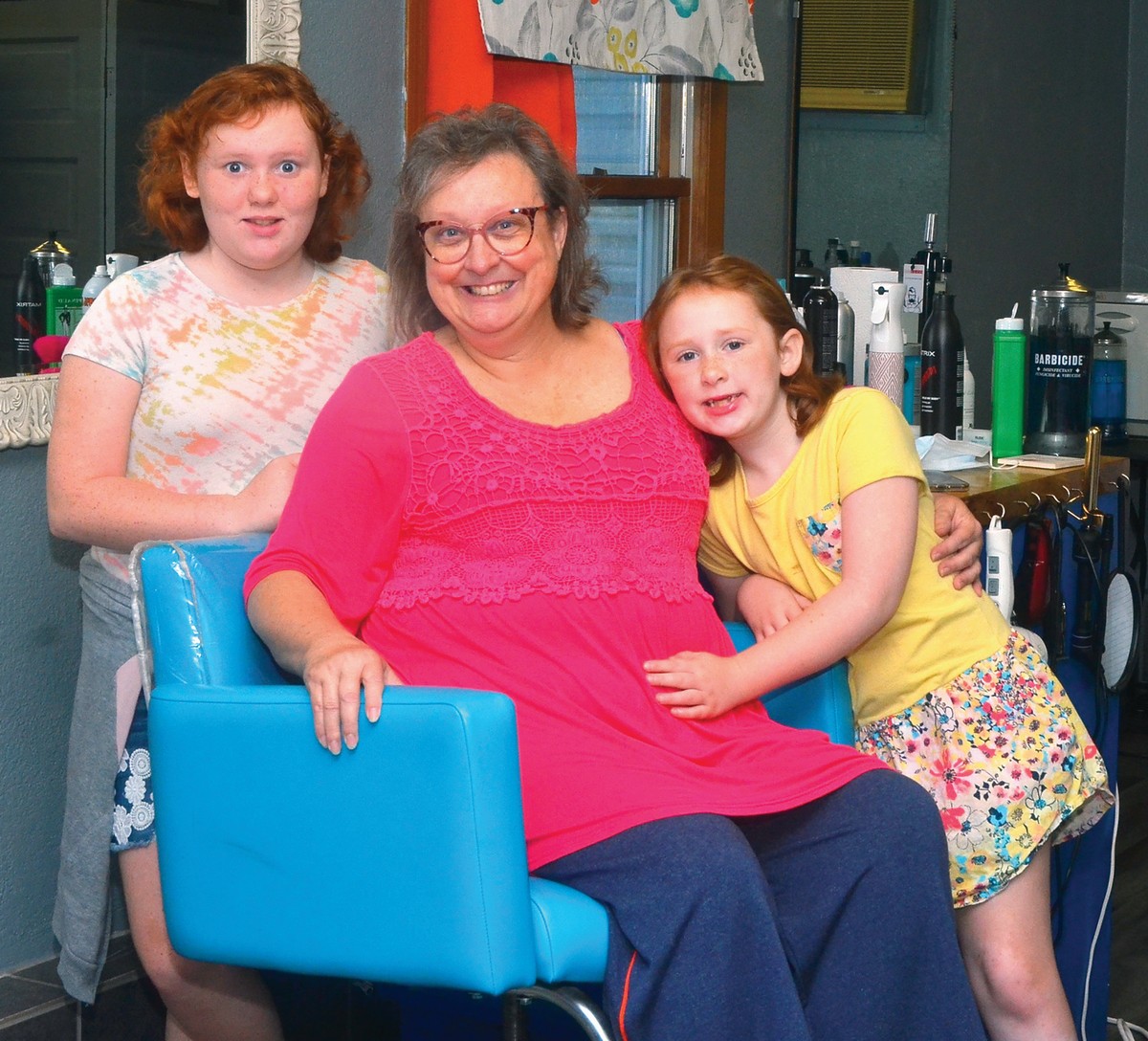 Jodi Craycroft is pictured in her hair salon on West Randolph Street with grandchildren Brooklynn (left) and Lilly Craycroft.