When I was a child, my mother was the center of my life. She was the smartest woman in the world as far as I was concerned.

Mom knew about the starving children in Africa, and when I complained about the bread being a little hard, she knew that the nuns ate hard bread … and they liked it.
I never learned who Pete was, but it was for his sake that we were encouraged to not do this or that. Mom didn’t think much of Pete, because generally her hand was on her hip when we talked about him.
Another thing – mountains. Would you jump off a mountain if someone else did? Easy answer, but what did it mean? This to a child who had never seen a mountain.
Surprisingly, it was my older sister and not my mother, who told me about clean underwear and car accidents.
Sandy also taught me that if I was to play tennis with a boy, to be certain to let him win. Miss a shot, or whatever – boys didn’t like to lose.
Mom was a do-it-yourselfer with our Lilt home permanents as good proof of that. She did not cut hair, so when I was about 3 years old, my brother, Don, volunteered. My memory of this event was triggered by a photograph of me wearing a scarf, one I had to wear until my hair grew out.
Mom worked for a time at Princess Peggy and was a very good seamstress. Armed with her trusty Singer sewing machine, she would make fancy dresses for my sister and myself, and for our dolls.
Moving to the country in 1958 gave our growing family more room. Mom’s love of flowers could be indulged here, although she was blessed that the yard was full of perennials.
She had not one, but two gardens. The first was a spring garden with onions, Swiss chard, leaf lettuce, cucumbers and tomato plants, and the second was the corn and bean garden.
Through Mom’s hard work, and her available labor pool, our basement shelves would be lined with jars of canned vegetables and fruit each year. I can my food today.
Over the years, my life was guided by my mother’s main directive – what will people say?
Living in a small town, we know exactly what that means. No matter what you did or where you did it, your all-knowing mother would find out about it.
Moving to Springfield after graduation gave me a sense of freedom that at first was hard to appreciate. Then I realized no one there knew my mother.
Looking back at mother’s admonitions during my childhood, I know they influenced my life in a positive way, even though at the time I just didn’t understand what she was talking about, knowing only it was important to agree.
By the way, what is a pig stye? 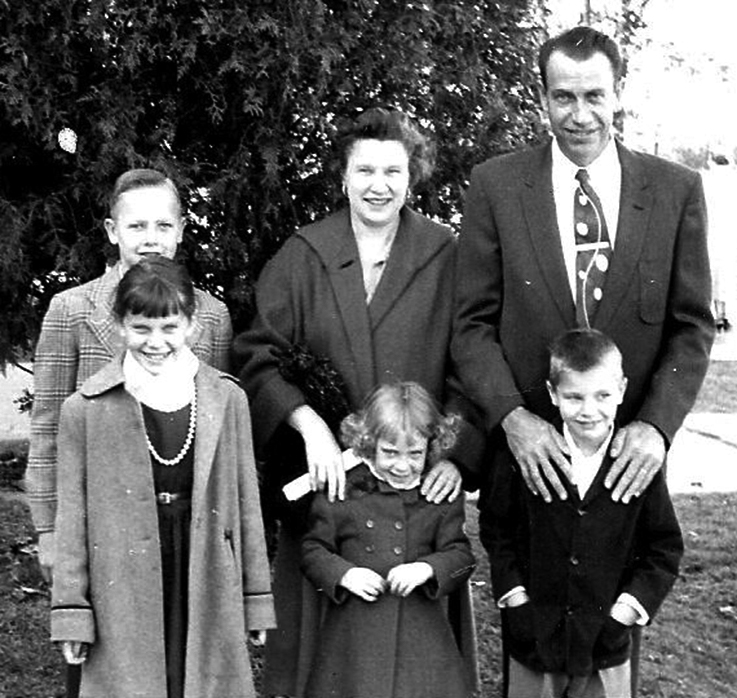 Linda Hanabarger is pictured with her parents, Ed and Cora Torbec