By JERRY NOWICKI
Capitol News Illinois
[email protected]
SPRINGFIELD — Restaurants across the state are set to open for indoor dining Friday among other additions to allowable activities under the state’s Restore Illinois plan. The state released new guidance for reopening businesses on Monday.

Restaurants must arrange their seating facilities so that tables are 6 feet apart, and parties larger than 10 people will not be allowed, per state guidelines. Standing areas such as bars will be allowed to operate at no more than 25 percent of capacity, and staff is required to wear face coverings when serving customers.
As well, gatherings of 50 people – up from 10 – will be allowed in Illinois, including at weddings and funerals; and fitness centers, movie theaters, museums and zoos will be allowed to reopen with capacity limits and health guidelines in place.
Industry-specific guidelines from the state can be found at Illinois.gov/businessguidelines.
The state continues to see downward trends in hospitalizations and positivity rate of those tested for the COVID-19 virus.
The number of new cases has leveled off to about 450 to 700 daily over the past 10 days, even as more businesses and activities get the green light to reopen.
Hospital bed, intensive care bed and ventilator use by COVID-19 patients on Monday all were at lows since the state began reporting the numbers daily on April 12, with 1,628, 419 and 256, respectively.
The state continues to report about 18,000-30,000 test results daily, and the positivity rate for tests conducted over the past seven days is approximately 2 percent, according to the Illinois Department of Public Health.
Monday’s 462 new cases among 18,219 tested made for a positivity rate of about 2.5 percent, and the new cases reported were the lowest in one week’s time. There were 26 more COVID-19-related deaths reported to bring the total to 6,671 among 137,224 confirmed cases since the pandemic began, and the recovery rate is 94 percent for those 42 days removed from a positive test, according to IDPH.
“The state of Illinois has made great progress in slowing the spread of COVID-19, largely because of the measures our administration enacted to protect residents and communities during this public health crisis,” IDPH Director Dr. Ngozi Ezike said in a news release.
“Our strategy to encourage social distancing and expand testing and contact tracing will enable Illinois communities to continue to take steps to reopen, to return to work and to resume daily activities.”
While some – including business groups and legislative Republicans – have urged Gov. JB Pritzker’s administration to expedite entry into the fourth phase of his five-phase reopening plan due to the progress being made, he has strictly adhered to the original timeline – with some revisions such as allowing outdoor dining earlier in the process – of the plan that he announced on May 5.
While each of the second, third and fourth phases of the plan lasted 30 days, there is no timetable for moving from Phase 4 to Phase 5, the final phase of the plan when the state’s economy fully reopens, including conventions, festivals and large events.
Per the current plan, Phase 5 cannot begin without a coronavirus vaccine or “highly effective treatment” being widely available, or without new cases of the virus being eliminated for a sustained period.
When Phase 4 begins Friday, venues will be able to host up to 50 people or 50 percent of their overall room capacity, whichever number is less. Multiple groups are permitted at certain facilities as long as there is space to social distance and limit interaction between groups.
Bowling alleys, skating rinks and clubhouses are on the list of allowable indoor and outdoor recreation under Phase 4, provided they also operate at the lesser of 50 customers or half capacity. Groups of 50 will be allowed for outdoor recreation, and multiple groups can gather if they can remain separated.
Museums and zoos can reopen at 25 percent capacity or less, but interactive exhibits and rides must be closed. Guided tours will be allowed but must be limited to 50 people or fewer per group. Indoor exhibits at zoos will remain closed as well.
Indoor-seated theaters and performing arts centers would be allowed to open with 50 guests maximum or 50 percent capacity, whichever is less, in each of the theater’s screening rooms or performance spaces. Outdoor capacity would be limited to 20 percent of overall theater or performance space capacity.
Concessions would be permitted if: delivered by a server who takes orders from guests while seated with distancing guidelines followed, or purchased pre-packaged via “grab and go” function at an outdoor kiosk or indoor service areas.
The guidelines also included revisions for youth and recreational sports. those include allowing competitive gameplay and tournaments with venues operating at half capacity and 20 percent seating capacity for spectators. Group sizes of up to 50 would be allowed with multiple groups permitted during practice and competitive games as long as interaction between groups is limited.
Gyms and fitness centers can open at half capacity and can have group fitness classes of up to 50 people with new indoor safety guidelines. Multiple groups, provided interaction between them is limited, would be permitted at these facilities as well
As well, seating capacities of 20 percent would be allowed at outdoor spectator sports, and film production could resume at no more than half capacity of the sound stage or filming location.
Water-based activities would be permitted at day camps in accordance with IDPH guidelines, half facility capacity and with a group size of no more than 15 participants.
Capitol News Illinois is a nonprofit, nonpartisan news service covering state government and distributed to more than 400 newspapers statewide. It is funded primarily by the Illinois Press Foundation and the Robert R. McCormick Foundation. 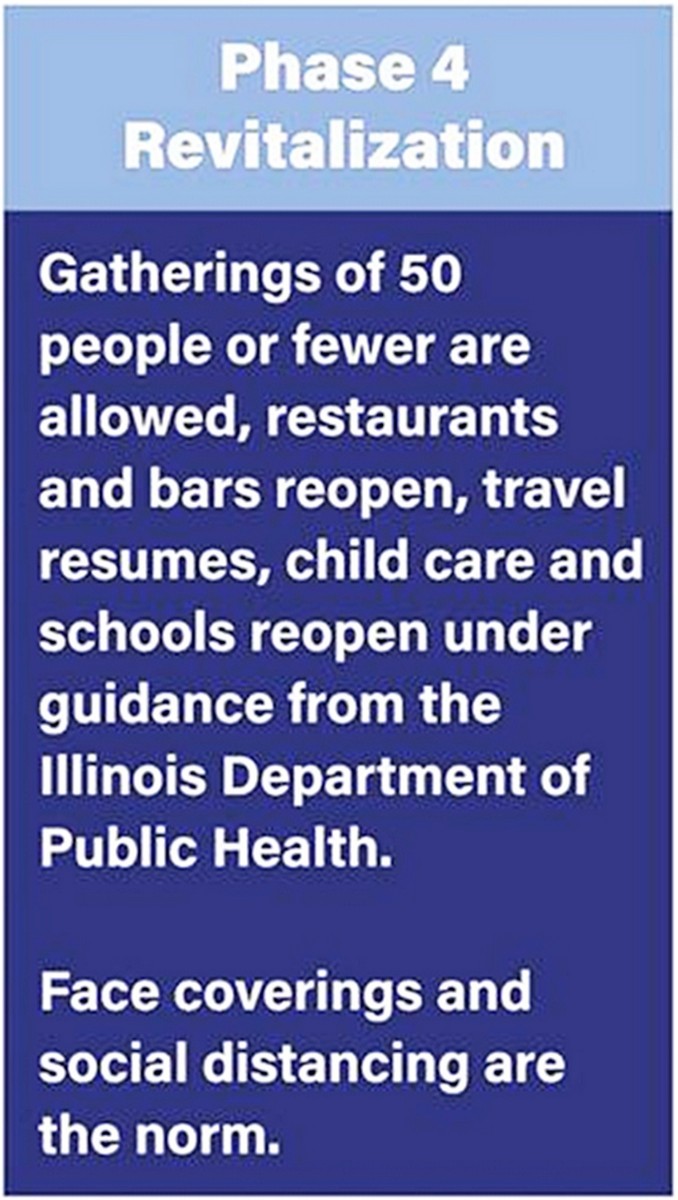