• The Fayette County Speedway in Brownstown is now open and operating.
Favorite Sounds of Nature
The songs of the little wild birds in the early mornings and the music of the church bells on Sunday morning, calling the people to worship our Creator.
The Birds
I know, some people have told me, that the birds sounds are actually warnings to other birds to stay out of their territory.
I just don’t believe that is true. I truly think that the little birds are raising their voices in song, welcoming the morning in praise and thankfulness to their heavenly Creator.
And the Church Bells
The melodious sounds are calling the people to Sunday morning services. One can imagine the people in past times, walking or arriving in horse-drawn wagons or buggies, or walking on some of the paths and roads, to attend the little churches, many of which still have descendants of those families responding to the call to worship.
Elizabeth (Behrends) Kasten’s family were members of Mt. Carmel Church, and her father was a leader in the music program.
Elizabeth has a small doll quilt that she sewed together when she was 9 years old as a young member of the church ladies quilting group. The ladies held their quilting group in the church building.
The Songs of the Birds …
… and the ringing of the church bells bring feelings of  peace, harmony and love, and appreciation of the beauty of nature, all of which are needed so much in these times.
These are all a part of the heritage, for which others have sacrificed so much that we may be free to enjoy them.
In the Beginning …
…of the United States of America, freedom of religion and speech, with the Constitution and laws, were introduced to protect those guidelines for the new country.
Since then, many lives were interrupted, by sacrificial life-long wounds, physical and emotional scars, and death.
Many of us sometimes take our lives and the good things in it for granted.
Imagine if the church bells were silenced and we did not have the luxury or opportunity to hear and respond to those sounds of the church bells or enjoy the tranquility of the early morning sunrises, brought in by the birds singing.
Bill and I enjoy sitting on our deck and again, and we try not to take our blessings for granted.
HCE Sefton HCE Unit Meet
After many months (it seems), the Sefton HCE Unit met on Thursday at the Golden Years Club building.
Sefton Unit President Flo Allen called the meeting to order and led the pledge to the American flag.
All signed a card for Jimmy Feezel. It was announced that a past member, Shirley Black, had died.
Allen announced that the annual Gat-Acquainted-Day fundraiser for the club will be held at the Golden Years Club building on Sept. 10, in combination with the annual meeting.
The Make-it, Bake-it-Sew it-Grow-it Auction fundraiser will be held at as usual, as part of Get-Acquainted-Day.
Allen passed out an informational sheet from University of Illinois Extension, “Impact of ACES (Impact of Childhood Experiences).
As they were unable to hold a May meeting, due to the coronavirus, they held the postponed Mother’s Day program at the June meeting, which consisted of the members bringing something  (photographs, mementos, etc.) left to or given to them by their mother, or sharing memories of their mother.
The ladies present responded well to the program, by presenting objects, photographs and sharing memories of their mothers.
Following are some of the presentations. The rest of the  “Memories of Mother” shared will be listed in here next week.
DeeDee Diveley had a necklace she believed was worn by her mother when she and DeeDee’s father were married.
Dee also showed the wedding picture of her parents, which showed a very attractive young woman (wearing the necklace) and a handsome young man.
Deloris Dukeman displayed a quilt of embroidered quilt blocks.
Making it even more precious was the fact that Deloris started the blocks, and her mother took it home with her to help on it.
When her mother died, they found the unfinished quilt on a closet shelf. Deloris’ sister then took the quilt and helped finish it, making it a family-crafted beautiful memory.
Elizabeth Kasten brought a family professional photograph taken in 1940, when Elizabeth was a very little girl, probably the youngest in the picture.
She also brought a small doll quilt, which she had made when she was 9 years old. She said that she was in the Mt. Carmel Church ladies quilting group.
She remembered she was told that there should be 12 stitches in each inch. The little quilt blocks were sewed very neatly together and the shape of each tiny little block was very neatly and evenly sewed together.
Flo Allen brought a large framed poem that her mother had written for Flo for her birthday. Her loving words described in poetry form, her mother’s description and appreciation for the devotion, love and care she had received from Flo, a very touching and loving tribute, of which a copy of had been passed on to  Flo’s daughter, Janice, and then on to Janice’s daughter.
Janice Stanfford (Flo’s daughter), showed a photograph that her grandmother (Flo’s mother) had left to her.
Janice shared the story of seeing the picture years before, which was a family photograph of four generations of women who had first-born daughters.
Janice told her grandmother that she wanted that picture, and her grandmother left it to Janice when she died.
Allen provided a selection of cookies and beverages. 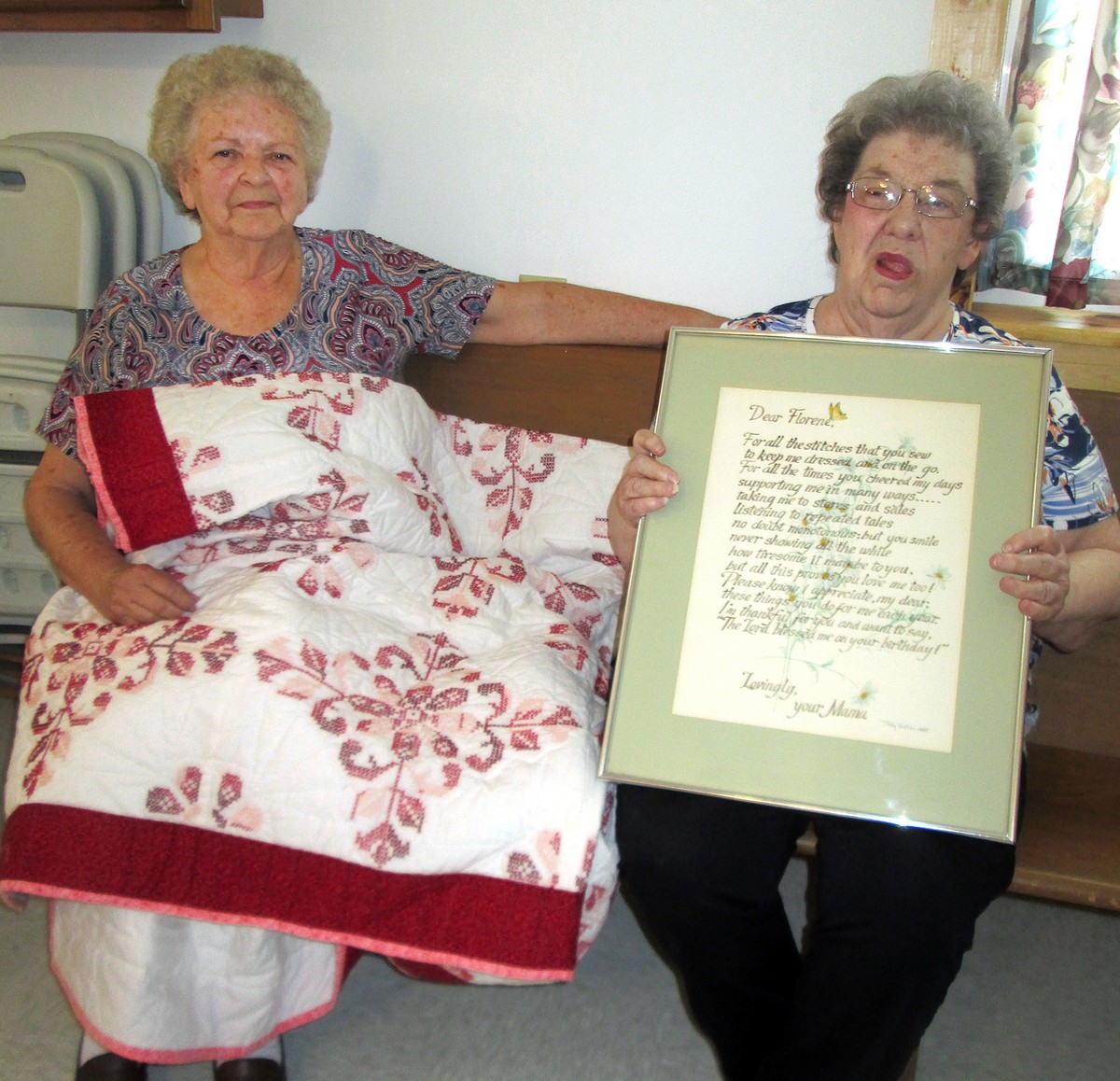 Deloris Dukeman, left, displays a quilt that she worked on with her mother, and Flo Allen holds a framed poem her mother had written for her birthday.