“President (Harry) Truman once said, ‘Our debt to the heroic men and value of women in the service to our country can never be repaid.”

Kent “Pee Wee” Denton, a former resident of Ramsey who now lives in St. Elmo, delivered those words as part of his address during the Memorial Day program held by Anderson-Scroggins American Legion Post 460 of Ramsey.
“They have earned our undying gratitude, and America will never forget their sacrifice,” Denton said, continuing the Truman quote about those who died in service to the United States.
In 1968, Denton, a minister, was the father of three children, thus he was not called to service during the Vietnam War. He did, however have friends who served … and later died as a result of that service.
“I knew a lot of guys who came back from Vietnam,” Denton said. “I spent seven months with two guys who came back from Vietnam and listened to their horror stories.
“And, years later, both of them died of Agent Orange, and I was honored and privileged to preach both of their funerals,” he said.
About the Vietnam War, Denton said, “I look at it this way – whether it’s an unpopular war or a popular war, if our country needs them, our soldiers go to do their job.
“As an old soldier told me one time, that oath has never been rescinded, and they go do the duty that they were sworn to do.
“And, in the process, some die, but that’s what they swore to do and they did it,” Denton said.
“Oftentimes on Memorial Day,” Denton said during his address in Ramsey Cemetery, “we really don’t realize just how many American have given the ultimate sacrifice for our country since the War of 1812 to Afghanistan.
“There have been more than 1,380,000 who have died, countless millions have served in our nation’s military,” he said.
“We are indeed blessed to be Americans, folks, to be born in a country like we have.
“If you’re an American today and you’re a Christian, stand for the flag, kneel at the cross and make God’s hand continue to bless America,”  he said. 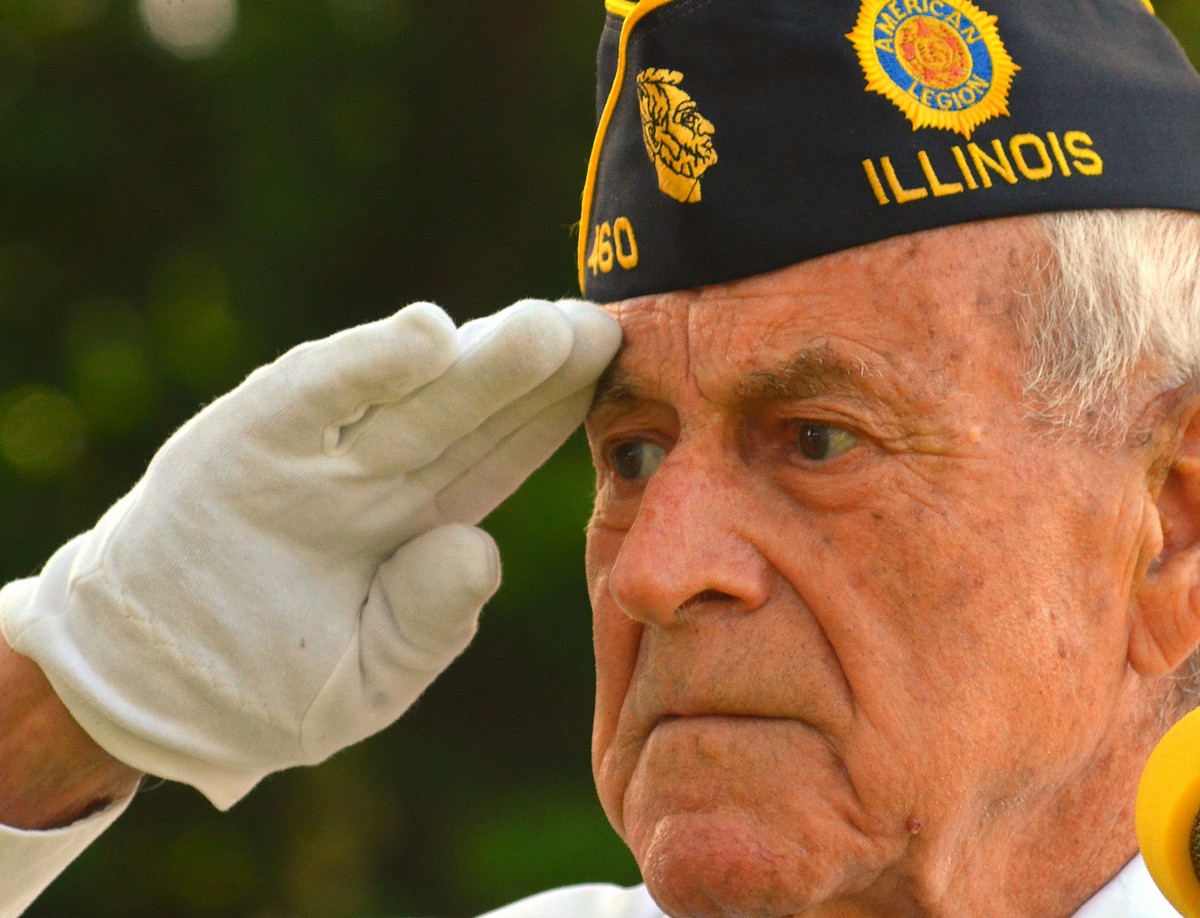 Bill Stephens, chaplain for Anderson-Scroggins American Legion Post 460 in Ramsey, stands at attention during the national anthem at the post’s Memorial Day program on Monday. More photos on Page 11. 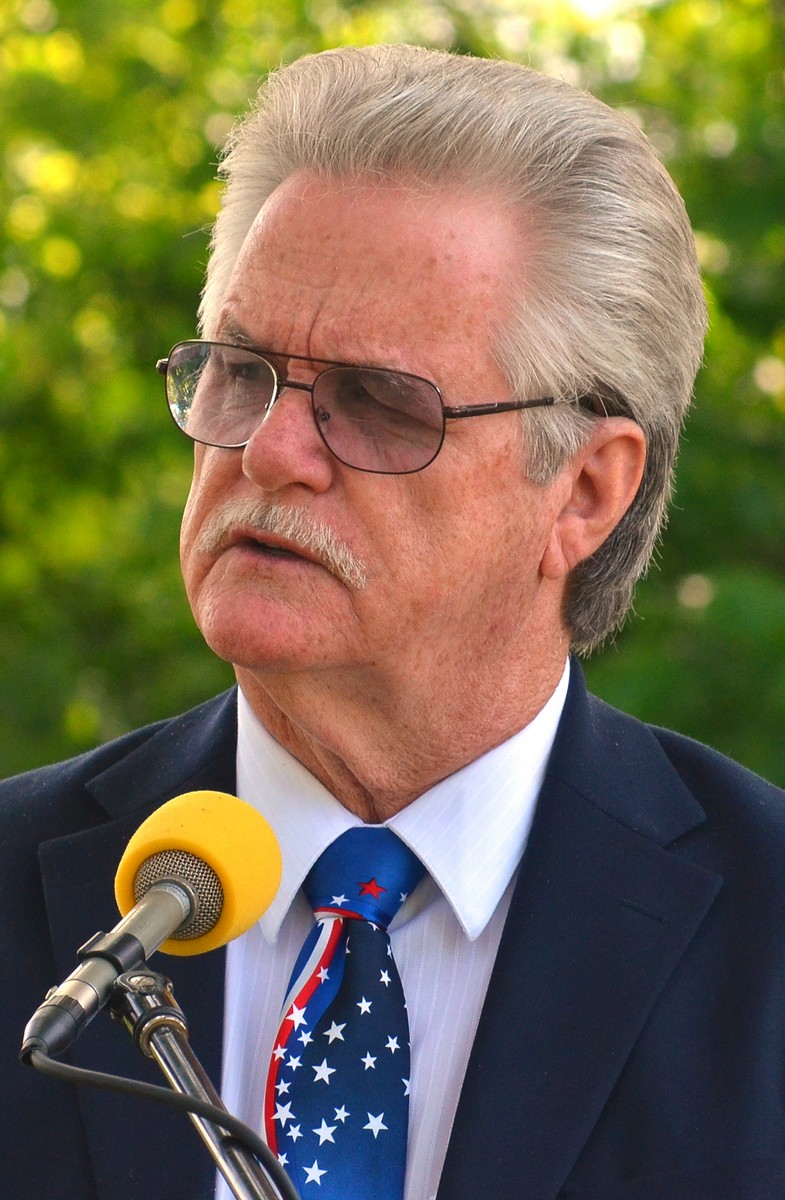 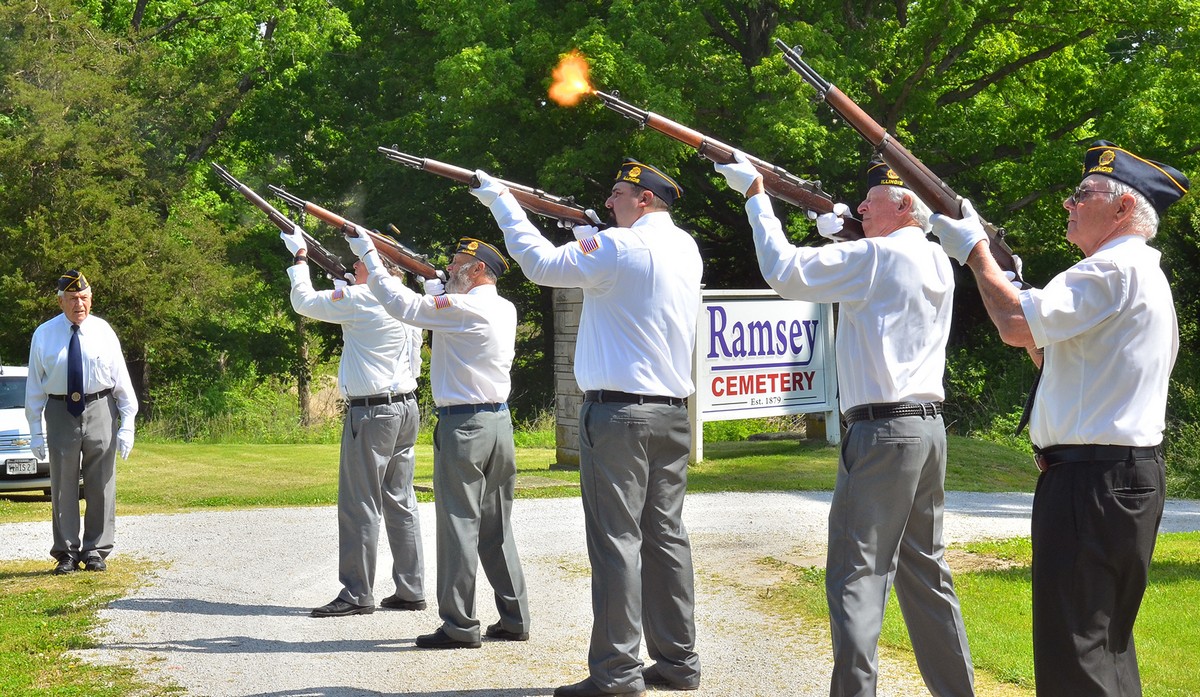 The Anderson-Scroggins American Legion Post 460 rifle squad fires a salute at the conclusion of the post’s Memorial Day program in Ramsey Cemetery. 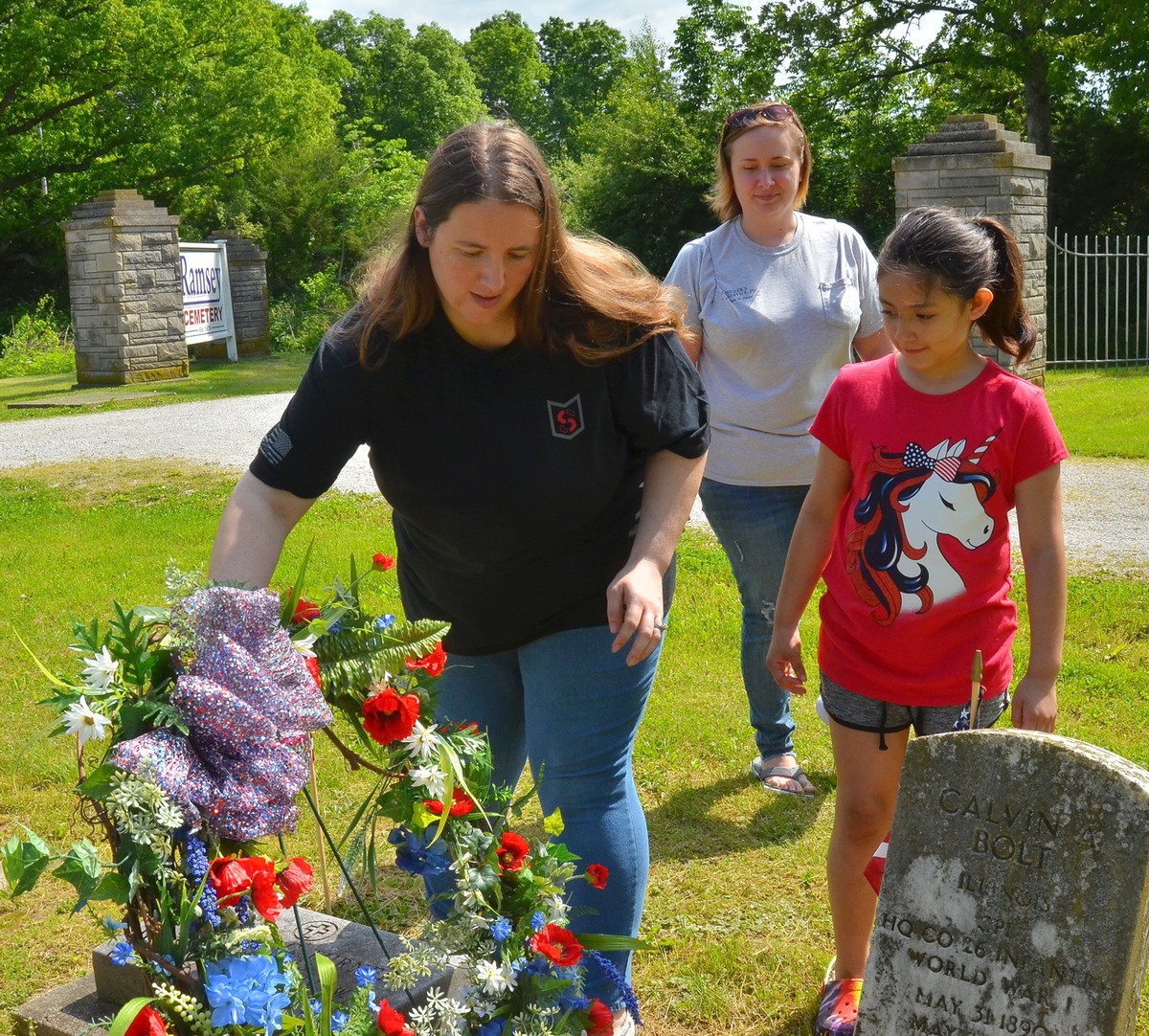 Jennifer, Jazmyn and Elizabeth Koski represent the Anderson-Scroggins American Legion Post 460 Auxiliary in placing a memorial wreath at the base of the flag pole during the Memorial Day program. 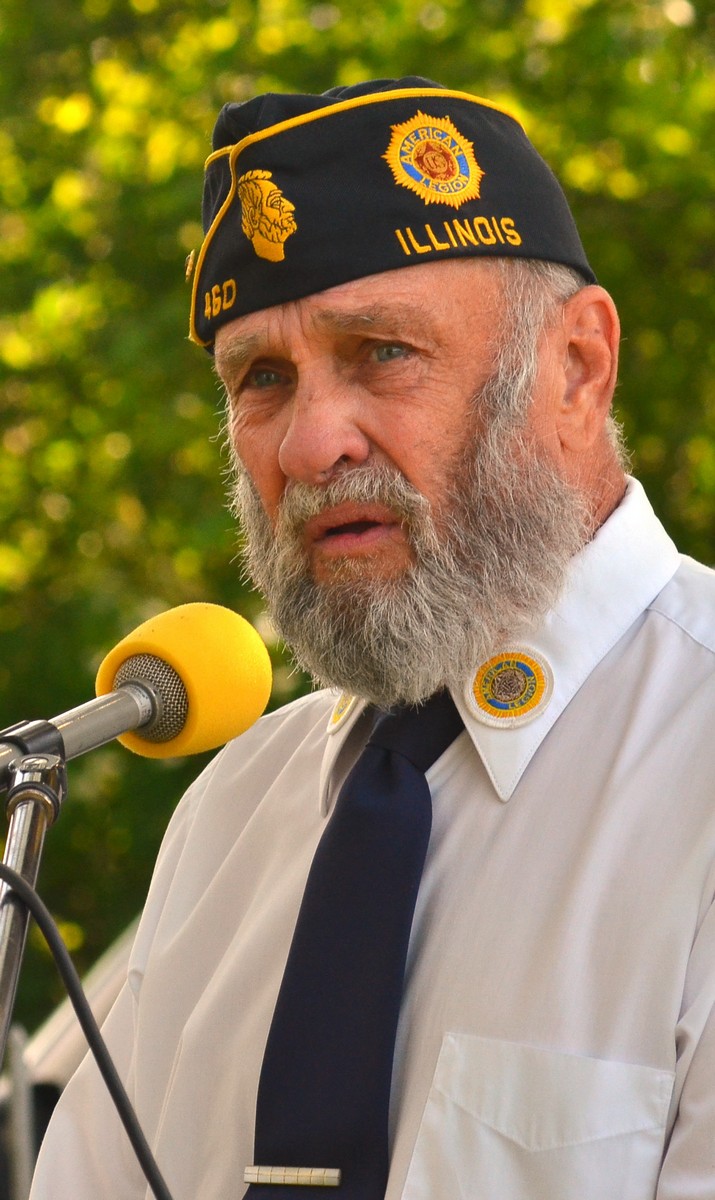 B.J. Mueller introduces the speaker for the Memorial Day program. 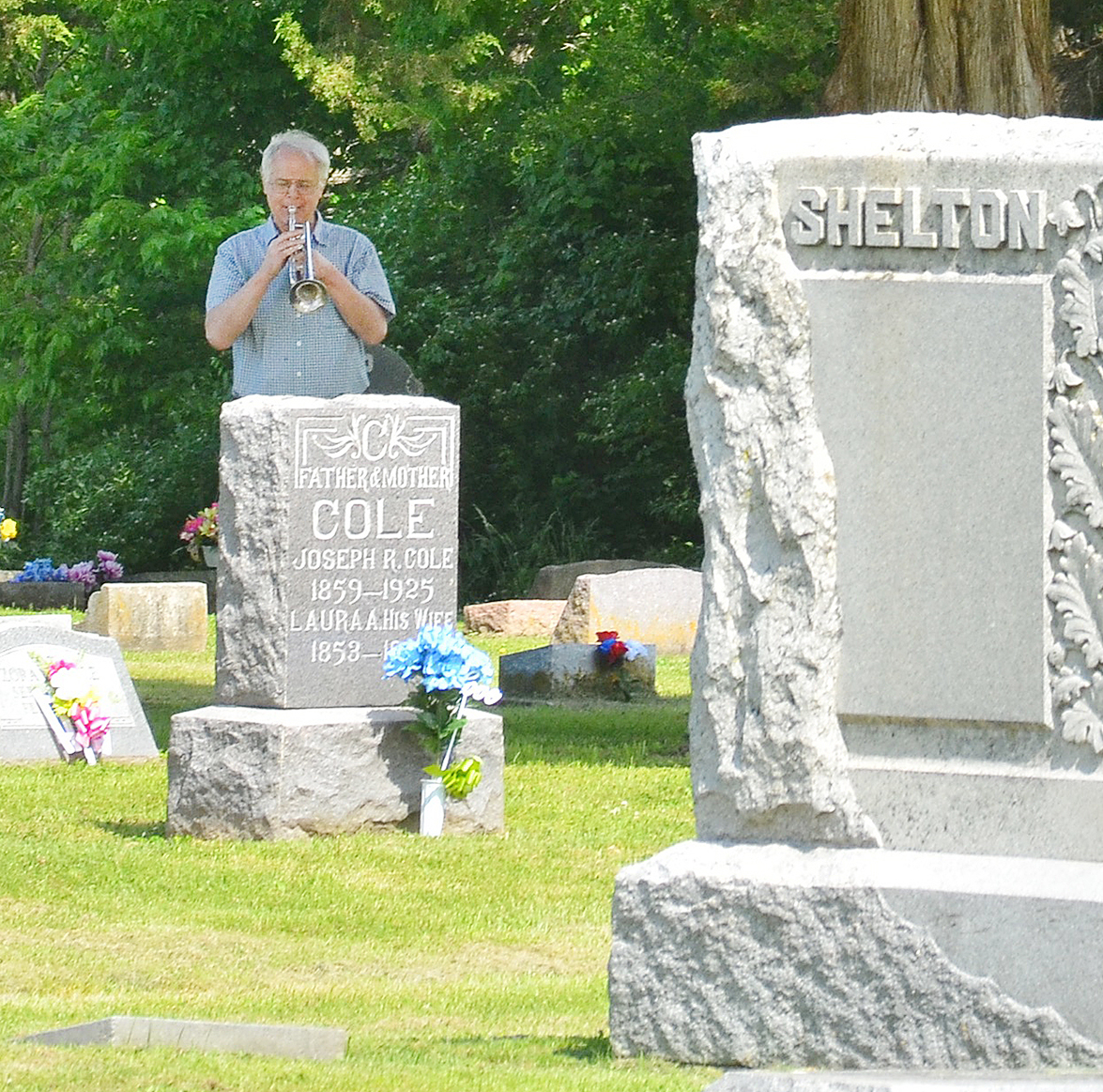