Asked by their pastor to do something for the community on just one day, some members of the congregation at St. James Lutheran Church thought it would be better to do something more lasting.

That was the birth of a program through which the congregation fills a backpack for about 80 students at the Regional Office of Education’s New Approach School in Vandalia.
The Evangelical Lutheran Church in America has a Fresh Start Sunday, when Lutherans are asked to participate by going out and doing something to benefit the community.
When the St. James pastor, the Rev. Krista Stokke (who recently left the parish for another position) approached members of the church council about the congregation doing something for the community on Fresh Start Sunday.
“But, we as a council,” Stacy Burgener said, “we decided, why do this just once a year; why can’t we come up with some program that does something on more than just one day.”
Talking about doing something in the local schools, council members knew that Vandalia children were provided food through the Nourishing Greatness program.
“We decided, a lot of times, hygiene items are often overlooked,” Burgener said.
“Since we’re a small congregation, we can only do so much,” she said. “We can’t take on the whole school district.
“And, we thought, it’s important that whomever we do it for, we do it for all,” Burgener said.
Because of its enrollment numbers, the council chose New Approach.
To help fund its backpack program, the council received a grant from Thrivent, a non-profit membership of Christians. A member of the congregation, Connie Eakin, was able to obtain a grant from Southwestern Electric Cooperative.
“Other than those grants,” Burgener said, “everything has been funded through our church by members’ donations.
“We’ve put it on our congregation, that this is something we are doing to help others,” she said.
Members of the St. James’ Fresh Start committee, Burgener said, “talk about what we should give them this month.
“We try to keep it hygiene (items), but we also try to throw something it that is maybe a little bit fun or unique,” she said.
Church volunteers then shop for the items to be included that month.
They try to keep the cost for each of the bags at about $10, meaning that they need about $800 a month to keep the program going strong.
Before Sunday services, “we try to get all of our members to fill a bag, and we ask them to write a little note, something like ‘Have a good day,’ just a little personal touch, something that shows that this is someone who cares about them,” Burgener said.
Members of the Fresh Start committee then deliver the bags to the school.
“We thought it was important that we go into the classrooms, that we hand them out, so they can put a face to who is doing this,” Burgener said.
“Once they know who we are, they are very grateful, very polite,” she said.
“I think it’s good for a lot of these kids to see that somebody cares,” she said.
Burgener said that in return, the students help out when they are asked.
She said that her daughter, Katie Tate, one of the teachers at the school, had her students help out at the church’s chili supper prior to the Halloween Parade.
“They’re willing to give back, and they like that,” Burgener said.
“We’re helping them, but they’re more than eager to help out, too,” she said.
The New Approach principal, Laura Benhoff, has nothing but good to say about the program.
“Last year, when they started it, it was so emotional, because some of the stuff that we take for granted these kids don’t have,” she said.
“They’ve taken our kids and adopted them, and they’ve even expanded the number of students they are helping,” Benhoff said.
“It’s just awesome.” 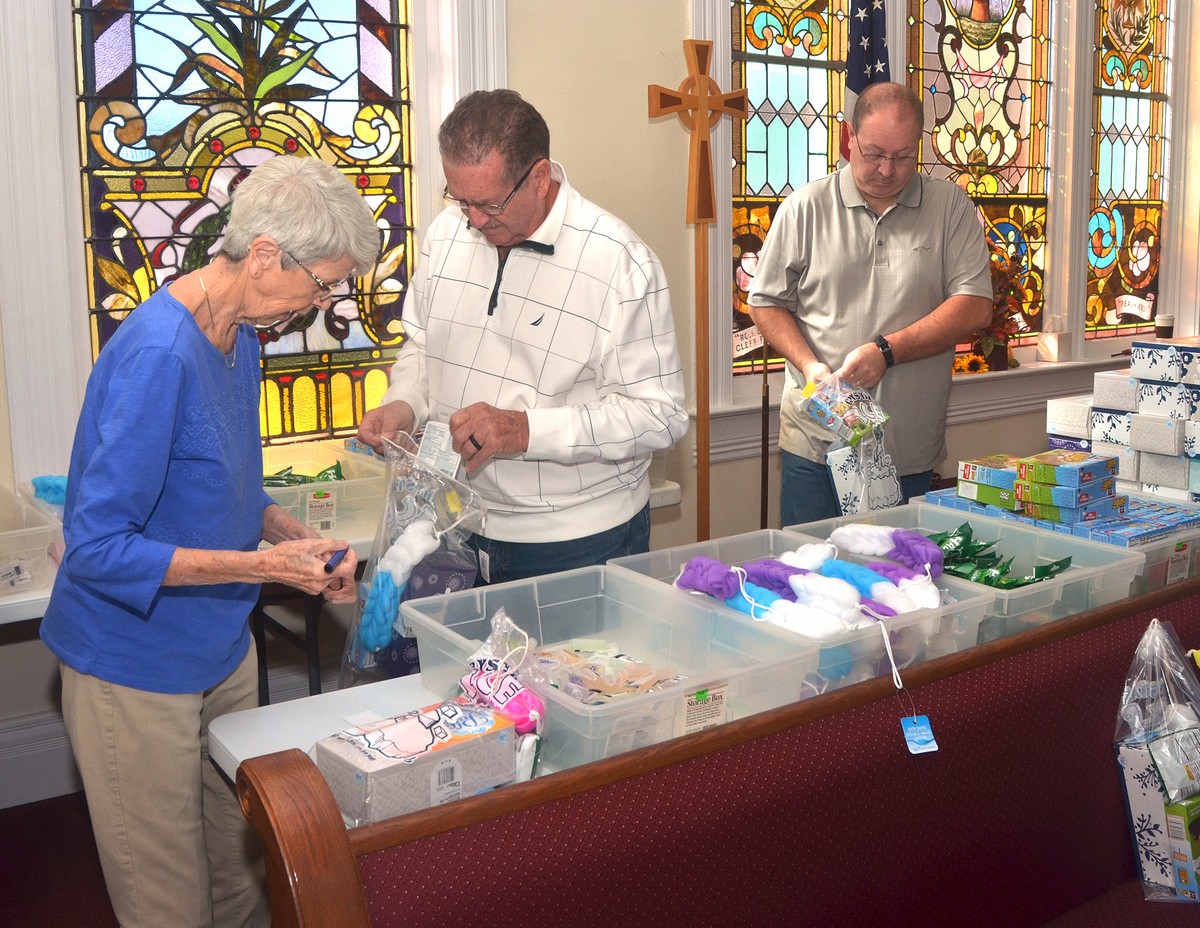 Member of St. James Lutheran Church in Vandalia fill bags with hygiene products and other items for students at the New Approach School in Vandalia. From left are Connie Eakin, Keith Schaal and Todd Hamilton.

Members of the Fresh Start committee at St. James Lutheran Church in Vandalia are pictured delivering bags that include hygiene products and other items to students and Principal Laura Benhoff at New Approach in Vandalia.