All three Vandalia wrestlers who made it to the IHSA Individual State Wrestling Tournament over the weekend returned home with a medal.

Gavin Mouser placed fourth in the 195-pound weight class, Anthony Enlow placed sixth at 285 pounds to win his third consecutive state medal, and Jarek Wehrle won his second consecutive sixth-place medal.
All of three of the wrestlers came within points of finishing higher in the tournament, but Vandals coach Jason Clay said, “It’s usually how state matches are – everybody is so good that there are a lot of close matches.
“Obviously, everybody came home with medals, so that’s pretty cool,” Clay said. “We had a little bit higher aspirations, but you always do.
“I don’t feel like we wrestled bad,” he said. “It’s just that the competition is so tough at state.
“Anthony (for example), he lost two ultimate tie-breakers,” Clay said. “In heavyweight matches, it’s pretty hard to keep guys down, and they couldn’t keep him down, either.
“On the first one, it was a matter of losing the coin toss and weren’t able to score,” Clay said. “But that’s part of it.
“Jarek lost a tough one to Matthew (Minick of Belleville Althoff). He had beaten him twice but it’s tough to beat a kid three times. He (Jarek) had won 1-0, 2-0 and lost 2-1 (at state), and had a chance to win,” he said.
“I’m just really proud of all of the kids for getting a medal,” Clay said.
“That’s a big accomplishment for them, and all three of them have a chance to go back again next year.”
Mouser met – and exceeded – his preseason goal.
“I always try to set a goal higher than what I did the previous year, so after getting knocked out in the sectional last year, my goal this year was to make it to state,” Mouser said.
“I feel great with what I did,” he said. “Coach said to come to the state tournament with high expectations for yourself, and that’s what I did … and I got to stand for fourth on the podium.
“Yeah, I was mad that I lost in the semifinals,” Mouser said. “I just went back to the hotel that night and thought, it’s time to refresh for the next day, which I did.
“Even though I lost (the third-place match), I’m still fourth in the state.
“It feels fantastic,” Mouser said.
Enlow didn’t reach his goal of improving on last year’s third-place finish, but took something from the tournament.
“It’s definitely disappointing,” Enlow said.
“It’s not how I wanted my season to end, but it’s going to encourage me to work hard, get a little bit of work in in the off-season and then come back next season and work even hard to accomplish my goal.”
Winning a medal “is still pretty special.”
Wehrle also hoped to better his finish last year, but he was still happy with wearing a medal.
“I didn’t improve (on last year’s state tournament), but I think I got better this year,” Wehrle said.
“I wanted to be No. 1, but I think that I was right there, a couple of points from everyone.
“I’m just glad that I placed,” Wehrle said. 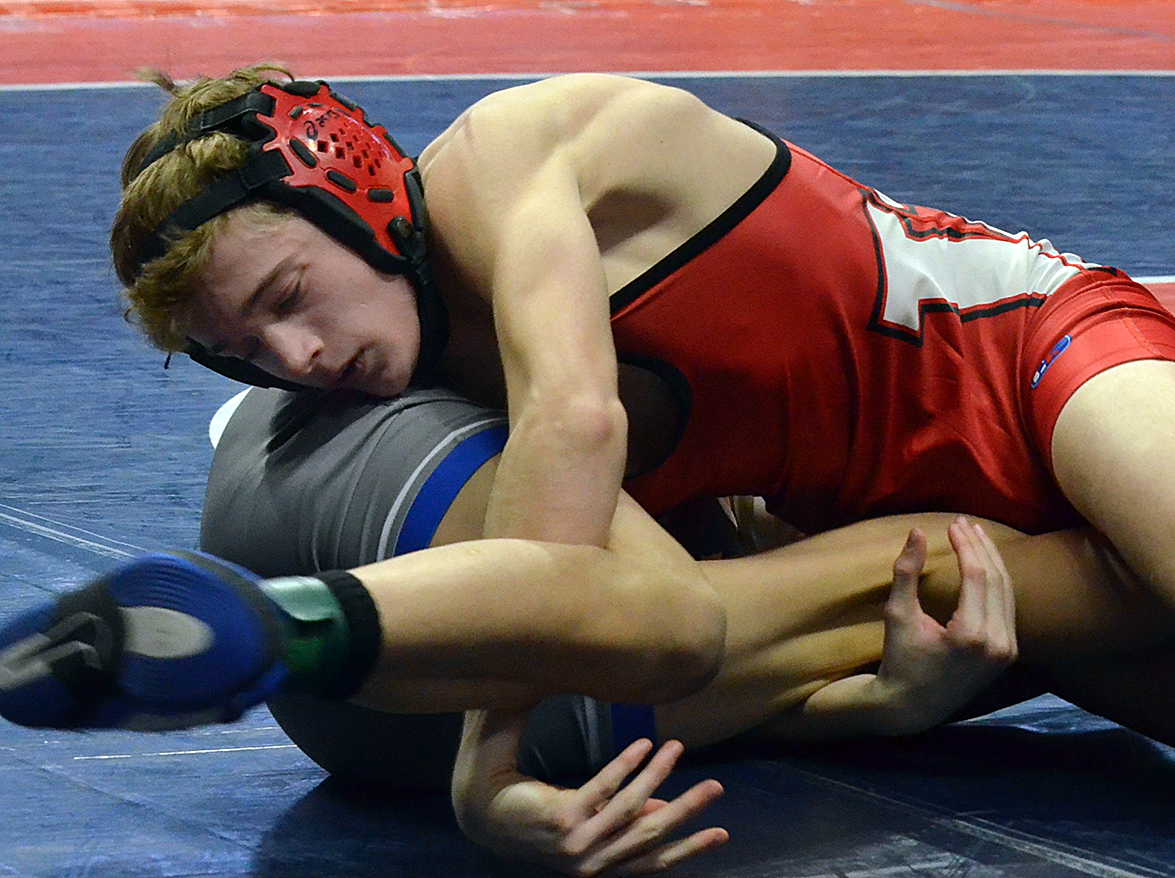 Jarek Wehrle works to pin Gage Lopez of Auburn in the first round at the state tournament. 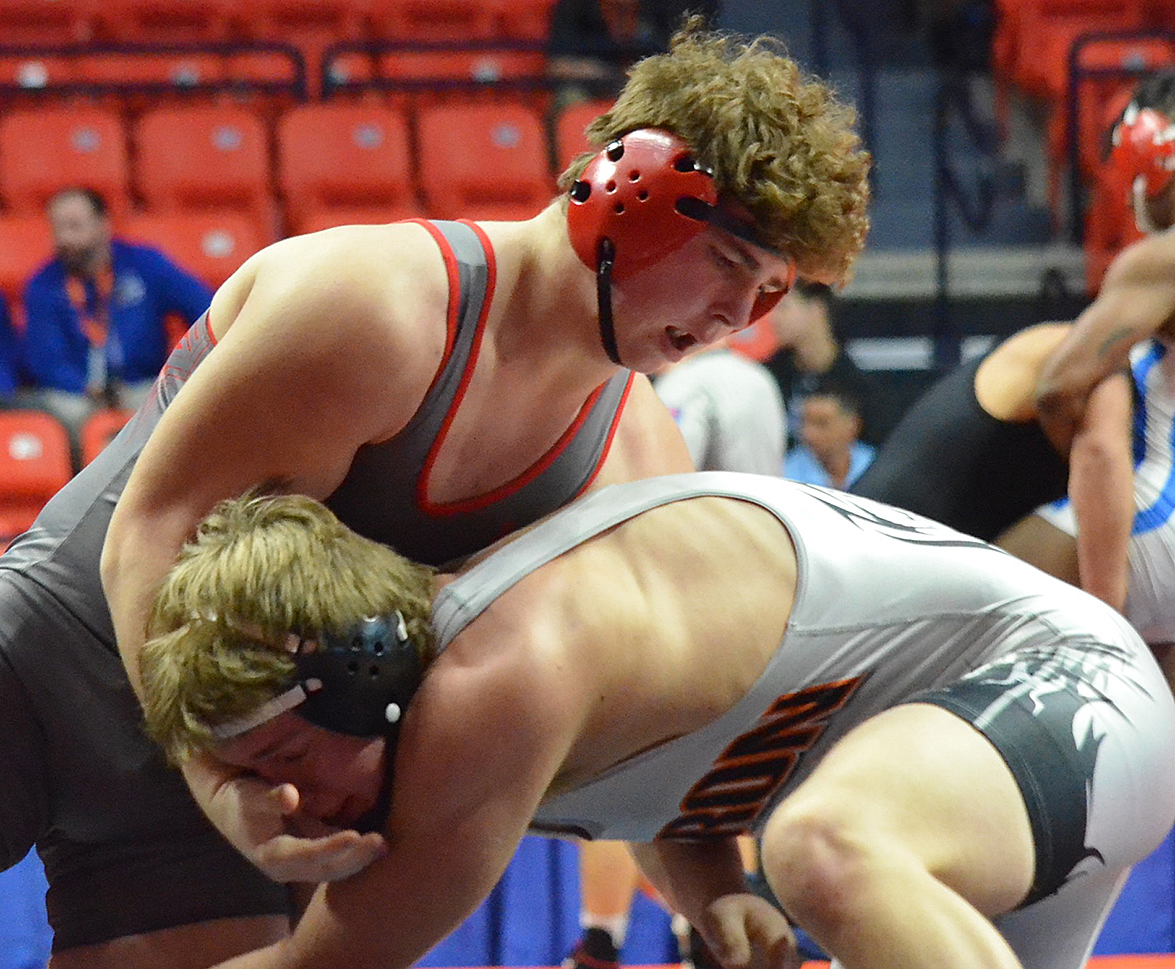 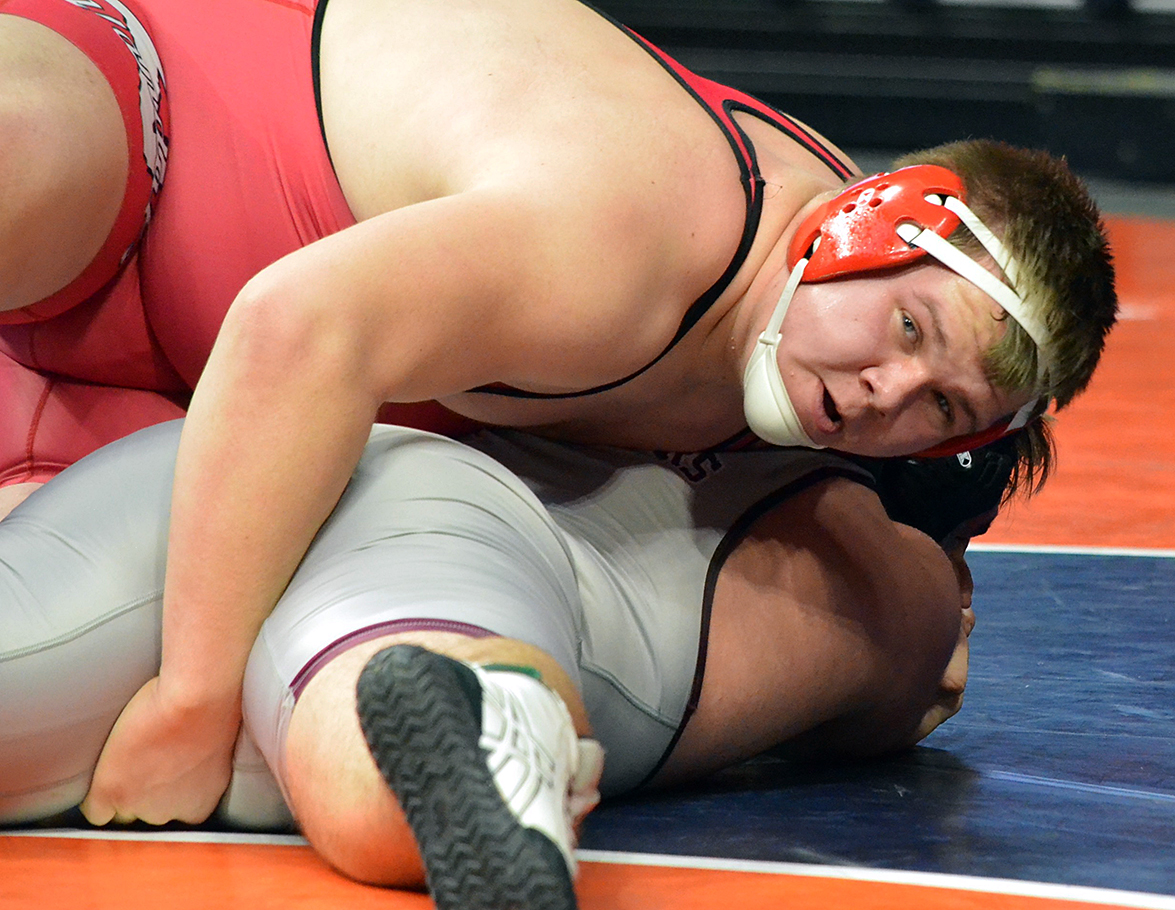 Anthony Enlow looks at the clock during his first-round pin of Willy Lopez of DePaul.