Some years ago, on a visit to Ingram Log Cabin Village near Kinmundy, I stopped in front of a primitive log cabin identified by the signboard as the Schwarm cabin.
Additional information told that it had once stood near Hickory Creek in Fayette County, having been constructed of white oak logs about 1847.

Walking up the three short steps, I was inside the cabin that looked like it had plenty of head room from the exterior, yet had a surprisingly low first floor ceiling. Not much room in which to rear a family of 12 children.
The second level, the loft, was reached by a ladder and would have held the pallets of the children, along with foodstuff stored against the winter chill.
The two-story construction of the John Schwarm cabin is unusual in the day of the more common 12-feet-by-16-feet cabins with stick chimneys.  Many of these cabins had an outside entrance to the loft.
When John and wife Barbara came to Fayette County, they brought with them three children, hence the second level.
Part of a large Ohio and Pennsylvania migration that included the Fogler family mentioned in this column last week, John bought 40 acres of land at $1.25 per acre from the U.S. government on July 10, 1847.
Two years later, he bought a second 40-acre tract also in Section 29.
The deed to the 40 acres land in Section 29, is made out to John Swarm, a spelling that carries on in the church records. Some of his relatives added a “c” in the name spelling.
John Schwarm first bought land in Wheatland Township on July 10, 1847, when be purchased the NW quarter of the SW quarter in section 29.
His name on the original patent is spelled Swarm. John purchased a second 40-acre tract in the same section two years later.
Turning to “Fayette Facts,” the genealogical society quarterly magazine, I found that John was born on June 15, 1812, in Lebanon County, Pa., the son of John and Doraday Schwarm, and came to Fayette County from Marion County, Ohio.
He died in Wheatland Township on Jan. 9, 1894, and is buried with his wife in the German Reformed Cemetery.
John married Barbara Hinger on Oct. 6, 1842, in Sandusky, Erie County, Ohio. Barbara was born on Feb. 24, 1821, in the Kingdom of Wurttemberg, Germany, and died on May 6, 1881, also in Wheatland Township.
John and Barbara’s first three children were born in Marion County, with their firstborn son dying early; Mary Ann, born in 1844; and Suzanna Schwarm, born in 1846. Soon after the birth of Suzanna, the family made the westward trek.
The National Road would have been surveyed through Indiana and Illinois by then, and bridges would have been built.
Nine more children were born to the Schwarm family in Illinois, and they took up residence in the little log cabin pictured above. These included: William, Samuel Luther, Henry (died at age 4), Anna, Catherine, Eli, Joseph, Christian and Melinda.
Within a year of the arrival of John and Barbara to the fertile Hickory Creek bottom, their extended families also made the move. This included John Schwarm’s brothers-in-law, Conrad Harpster, John Harkey and Jacob Hinger.
Other Marion County, Ohio, families who followed the migration to Wheatland Township included Bennyhoff, Peters, Hoover, Smail, Mahon and Pryor from Virginia, and Lash and Countryman from Pennsylvania.
The John Schwarm log cabin was also the enter of religious life on Hickory Creek, and several families gathered in the tiny cabin on afternoons for worship, using a Lutheran prayer and hymn book.
The Zion Lutheran Church was formally organized in this log building on Dec. 25, 1852, with 28 members. The members built a church house, which was completed in the fall of 1860 and dedicated by the Rev. S.W. Harkey. Early services were conducted in German.
The history of Old Loogootee tells of a circuit rider visiting the little group from time to time. Glen Schwarm confirms this by saying that the log cabin home of the John Schwarm family was used by the Lutheran circuit rider to give Communion to those living the area.
The log cabin has been moved and the old church is long gone, but the Old Loogootee Cemetery marks the spot where the church was originally built.  Just west of the cemetery, a school was also built for education of the children.
The 1870 membership list of Zion Lutheran Church includes family names of the original founders – Peters, Swarm, Harpster, Lear, Hoover, Oakleaf, Ragel, Hinger, Smail, Garret, McDaniel, Fogler, Reed, Pilcher, Harris, Pontious and Stein.
We can visit the Schwarm log cabin today because of the foresight of Erma Ingram and her son, Bob, who spent years searching for log buildings and then moving them to the Ingram Log Cabin Village near Kinmundy. 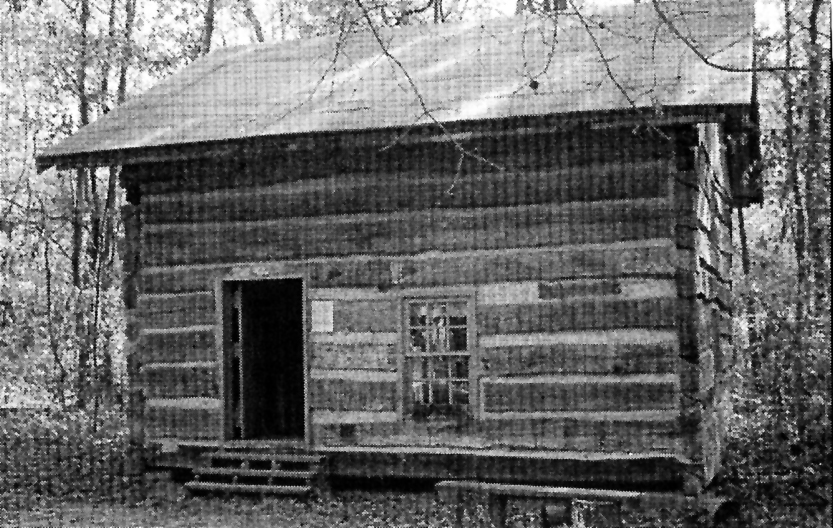