A local family’s involvement in a Vandalia car and truck dealership for close to six decades has ended with the sale of the dealership to another family operation.

The sale of Arthur Young Inc. to Dan Hecht Chevrolet of Effingham late last week also ended the career of more than 50 years at the dealership for Dennis Young, a career that started with him sweeping floors, emptying trash cans and washing cars.
While the Young family tradition at the dealership, started by his father, Arthur, has continued for 58 years, the new owner has a tradition that has extended for 60 years.
That Dan Hecht tradition is something that interested Dennis and his wife, Angie, when they decided that it was time to retire from the business.
“One of the things we wanted was a family tradition, instead of selling to something like a large company in St. Louis,” Angie said.
In the sale, the current staff is staying with the dealership, something that was important to the Youngs.
“Arthur treated everybody like family, and Dennis has continued to do that,” she said.
One of the four brothers involved in the operations of Dan Hecht Chevrolet said that family tradition is also big with their dealership and is something that made Arthur Young Inc. attractive to them.
“Number 1, their concept, their family, being part of the family, is the same as ours, and we just thought it would be a smooth transition,” said Jim Hecht, president of Dan Hecht, who partners with brothers Dan, Jerry and Bob in the family business.
“We’re all about taking care of customers and family and business, and the Youngs have been that way for years as well.
“Our dads knew each other for years, and they have had a lot of similar business practices,” Hecht said. “I think we grew up on the same side of the street.
“I think it was just a natural thing,” he said.
The name of the local dealership will remain the same for some time. “We will put our name on it at some point,” Hecht said, adding that the business plan includes increasing the inventory.
Arthur Young started in the car and truck sales business at Brubaker Motor Co. in his hometown of Litchfield in 1947. In 1960, he partnered with Brubaker to purchase the Vandalia dealership from Burtschi Motor Co.
In 1970, Young bought out Brubaker and became the dealer principal.
In those early years, while selling cars and trucks, Arthur worked in the evening refereeing football and basketball games.
He also served as chairman of the Illinois Automobile Dealers Association in 1976, a position that Dennis also held, in 2003.
After doing odd jobs at the dealership in his youth, Dennis graduated from Vandalia Community High School and then attended Lake Land College in Mattoon.
He returned to the dealership full-time as a salesman in 1973.
And while he was selling cars and trucks, Dennis was also learning about other facets of the dealership, including parts and service. “My education started in 1973,” he said.
Dennis became the dealership principal in 1995, continuing to work alongside his father until Arthur retired in 2008, though he had started to scale back his involvement a few years prior to that.
Over the past 45 years what Dennis has liked most about being at the dealership is serving the customers.
“It’s always exciting to see people get a new Chevrolet. They’re excited and their family is excited,” he said.
Seeing changes in vehicles each year has also been exciting, he said.
“It’s amazing what the new vehicles are like today.
“When I started, trucks – and even some cars – didn’t have power windows and locks.
They might have had air conditioning, they might have had automatic transmission,” Dennis said.
“That progressed to tilt wheel and cruise control, and now they’ve got everything, included heated and cooled seats, and heated and cooled steering wheels,” he said.
“I used to think that tilt wheel and cruise was a big deal. Today, that’s nothing.
“I remember three speed on the column,” Dennis said.
“The changes in technology has really been something,” he said. “Mechanics have gone on to technicians; it’s really amazing the knowledge that they have,” Dennis said.
Changes have also included those at the dealership. The Youngs have undertaken three renovations to the property, including a major one near the 50th anniversary for the Young dealership.
“This facility has changed so much,” he said. “You look at some of the old pictures and the way it looks today.
“I’ve just enjoyed the car business,” he said. “And the busier you are, the more fun it is, the days that you sell five or six cars in one day is really exciting.”
His health is one of main reasons behind Dennis’ decision to retire.
He has fully recovered from a heart attack and five-bypass surgery, and now wants to do other things.
“There are a lot of place that Angie and I haven’t seen because we had the time,” Dennis said.
What they won’t miss is the time spent at the dealership and issues that come up at night, “the times that the police call in the middle of the night because they find a door standing open or something else wrong.
“It will feel funny, because every time we’d come to town, we’d check the property to make sure everything is OK.
Their plan is to spend winter months in Florida. “He’s following in his dad’s footsteps with that,” Angie said.
“Hopefully, I will never see snow again,” Dennis said. 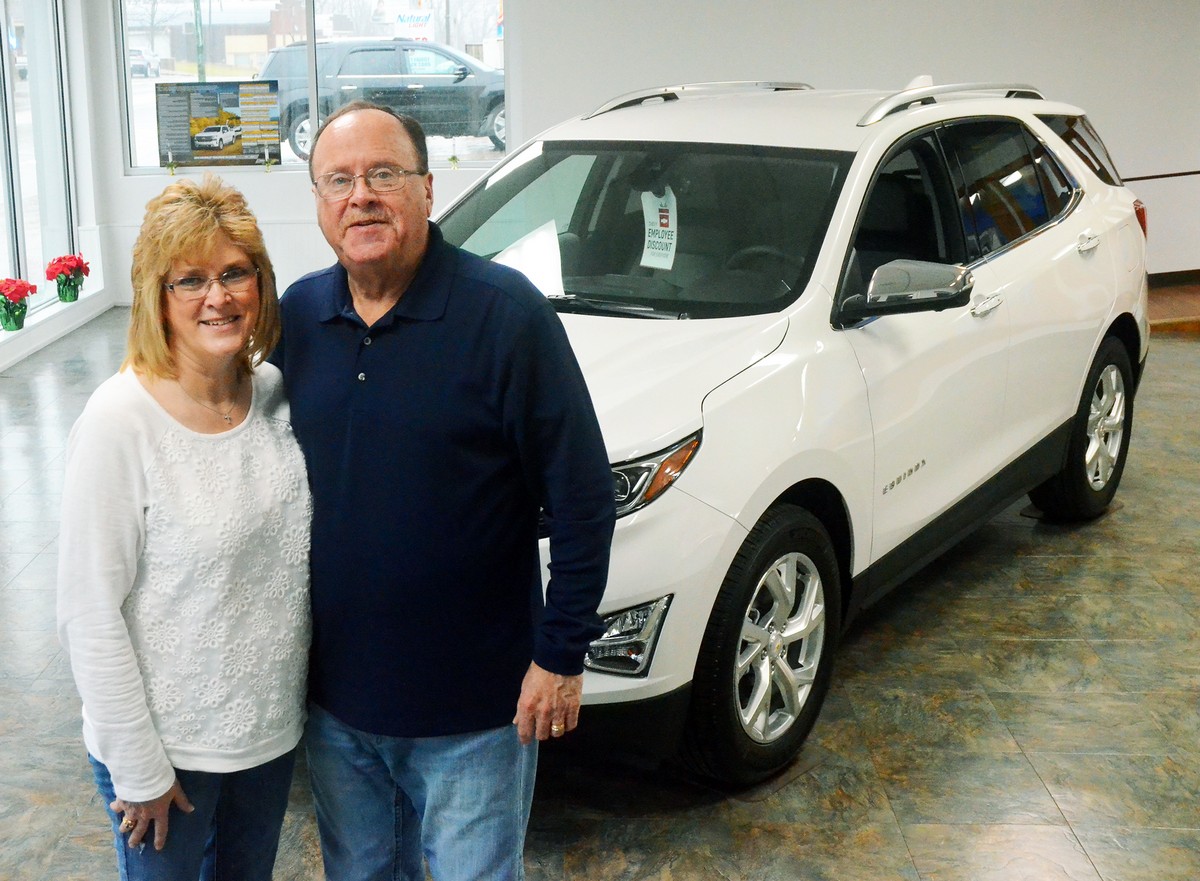 Dennis and Angie Young are shown in the showroom of Arthur Young Inc. The sale of the dealership to Dan Hecht Chevrolet of Effingham became final last week.

Dennis and Angie Young are pictured with the four brothers of Dan Hecht Chevrolet – Jerry, Dan, Bob and Jim. 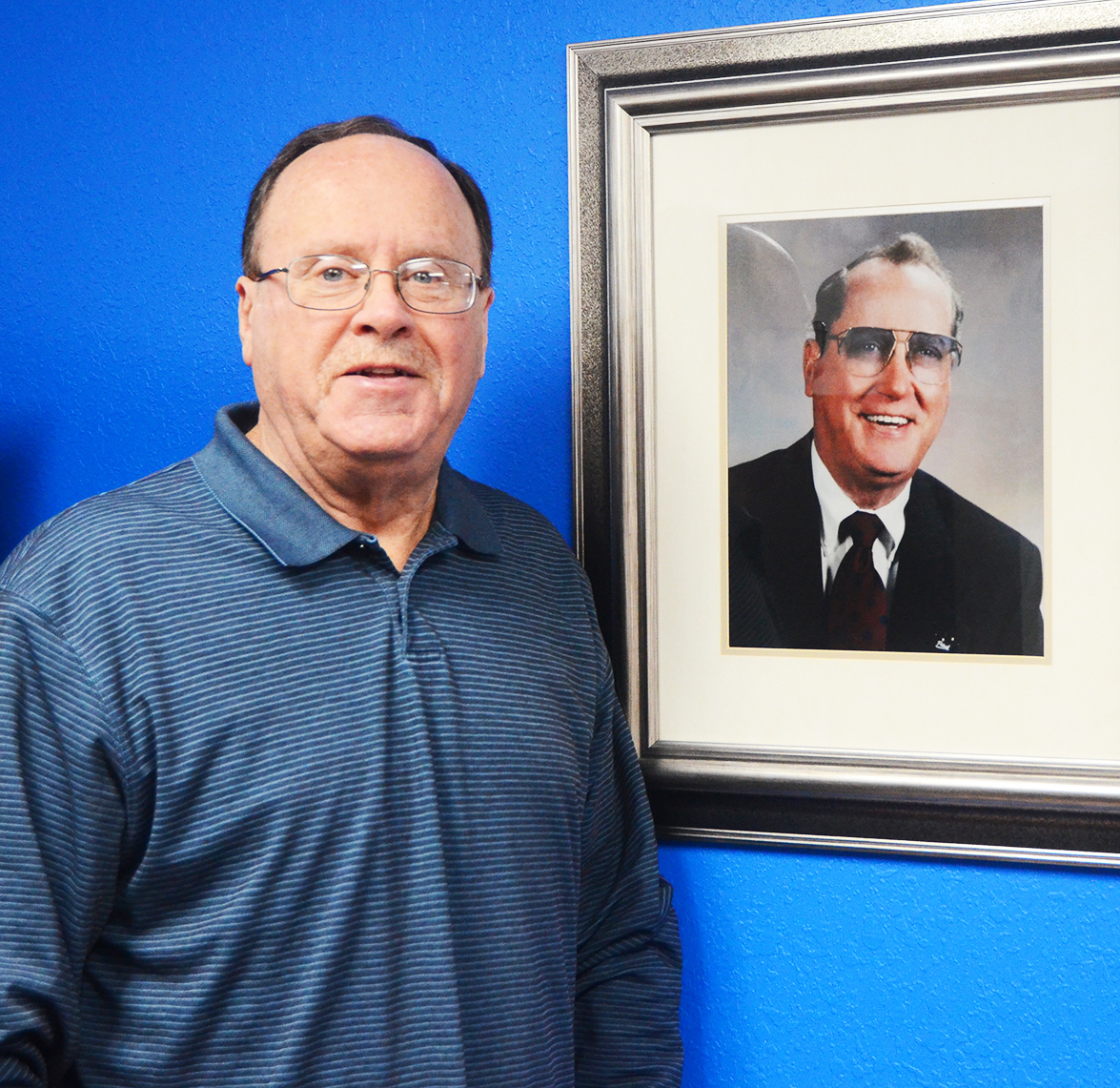 Dennis Young is shown with a photo of his father, Arthur Young, who purchased the local dealership in 1970. 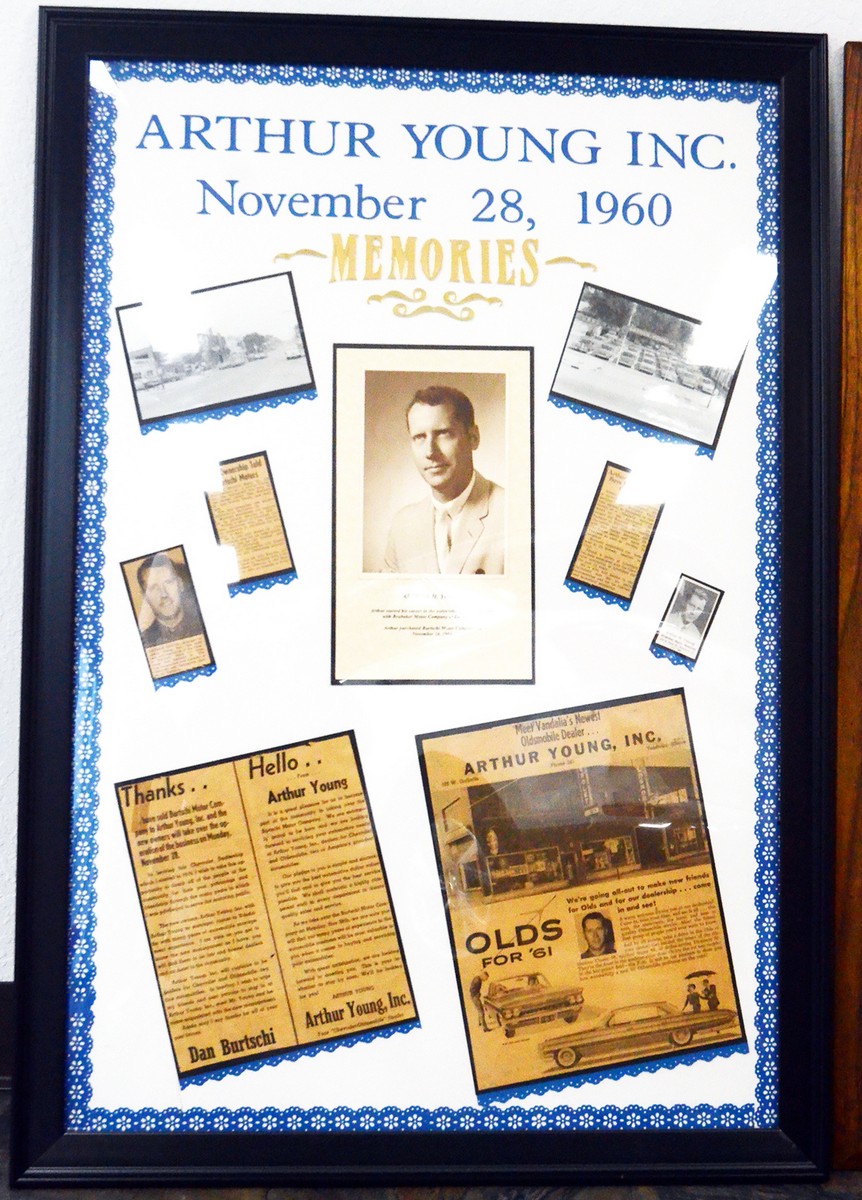 The board containing news of the the dealership changing hands