Trevor Smalls’ summary of his five-touchdown game against Staunton was pretty basic – “I just came out and played football. That’s what I do.”

Smalls said that with a smile after scoring five touchdowns and rushing for 145 yards on just 18 carries on Friday night as the Vandalia Vandals stayed unbeaten.
His 145 yards gives him 4,503 total offensive yards in 28 games, putting him at the top of the school’s all-time list. He passed Travis Blain, who compiled 4,404 in 31 games from 1995-97.
With 4,022 yards rushing in his VCHS career, he is 318 yards from catching Blain.
Blain still holds the school record for most games with 100-plus yards, with 21, and Smalls is three behind with 18.
Also during Friday’s game, quarterback Matthew Wells became the school’s leader in most games with more than 100 yards passing. His 15 100-plus games is one more than Michael Whitten had from 1986-88.
The 46-12 win boosts the Vandals, who were ranked No. 8 in Class 3A going into the game with Staunton, to 6-0 on the season.
Up next is the South Central Conference matchup of the season, when Carlinville comes to Mark Greer Field on Friday night. Both the Vandals and Carlinville, each 6-0 this season, advanced to the quarterfinals of the Class 3A playoffs last season.
This year’s Cavaliers come into Friday’s game ranked No. 2 in Class 3A, having outscored their opponents 285-36.
For the game, the VCHS spirit group, Code Red, has set a theme of “Light Up the Night” and will have glow sticks, bracelets and necklaces for the home crowd.
The outcome of Friday’s contest at Staunton, much like those the previous three weeks for the Vandals, was never really in doubt.
After receiving the opening kickoff, the Vandals started out on their own 39-yard line. On that first series, Wells lofted a pass to a wide-open Blake Morrison, who scooted into the end zone untouched. The extra-point kick by Cameron Withers made it 7-0 Vandals.
The Vandals’ defense then pushed Staunton back and forced them to punt from their own 10-yard line. Smalls fielded the punt and returned to Bulldogs’ 29-yard line.
Five- and 9-yard runs by Smalls advanced the Vandals to the 15-yard, and Wells hit Morrison on a slant route. Withers’ extra-point made it 14-0.
It was early in the second quarter when Smalls began to make his presence known.
Smalls scored from a yard out with 9:50 left in the second quarter.
Staunton scored one of its two touchdowns in that quarter, on a 21-yard pass play from Griffin Bianco to Tyler Grandidier. The extra-point kick was blocked, and Vandalia went into the locker room at halftime with a 20-6 lead.
In the third quarter, after the Vandals advanced to the Staunton 9-yard line on a Bulldog holding penalty, Smalls carried the ball to the end zone for his second touchdown of the night with 5:04 left in the third quarter.
With 4:14 left in the quarter, the Vandals recovered a Staunton fumble on the Bulldogs’ 22-yard line, and a minute later, on second down and 24 from the Staunton 35, Smalls scored his third touchdown.
He scored his fourth touchdown about 10 seconds into the final quarter on a 19-yard run, and later, after taking the snap in a wildcat formation, Small added his final score on a 28-yard run.
Vandals coach Jason Clay was pleased with his squad’s performance against what he called “a good team.
“I think they did a good job of planning our inside run.
“In the second half, we were able to get outside on them a little bit,” he said.
“Thomas (Ritchey) had some big runs in there and a couple of big catches, just showing another weapon we have, putting that on film for people to see.
“And I think that kind of opened up Trevor a little bit in the second half,” Clay said.
“He had some big runs and we had some big blocks; Garrett Austin had a big block on that sweep for a touchdown.
“They were doing a good job of putting pressure on us, blitzing guys and hanging off the edge, and Matthew (Wells) threw some good balls.”
Despite the performance, “We’ve (still) got some things to work on. We got too much pressure on (our) quarterback to my liking, so we have to clean that up.
“I thought that our defense did a whale of a job. They gave up a few yards at times, but I thought our coaches had a good plan and mixed it up on them.
“They gave up some yards, but didn’t give up a lot of points, and that’s kind of what the idea is – probably in this day and age, you’re not totally going to shut people down unless it’s a mismatch.
“They’ve got a good team, some good weapons, and we had a good effort against them,” Clay said.
After the game, Clay congratulated his players for locking up a playoff spot.
“So, now, the next thing is, try to keep the undefeated season going and play for that first-round game,” he said. “You’re probably going to have to go 9-0 or 8-1.
“The last couple of years, 8-1 hasn’t necessarily guaranteed you a home game, so we’ve got to try to keep the 9-0 streak going … one game at a time.” 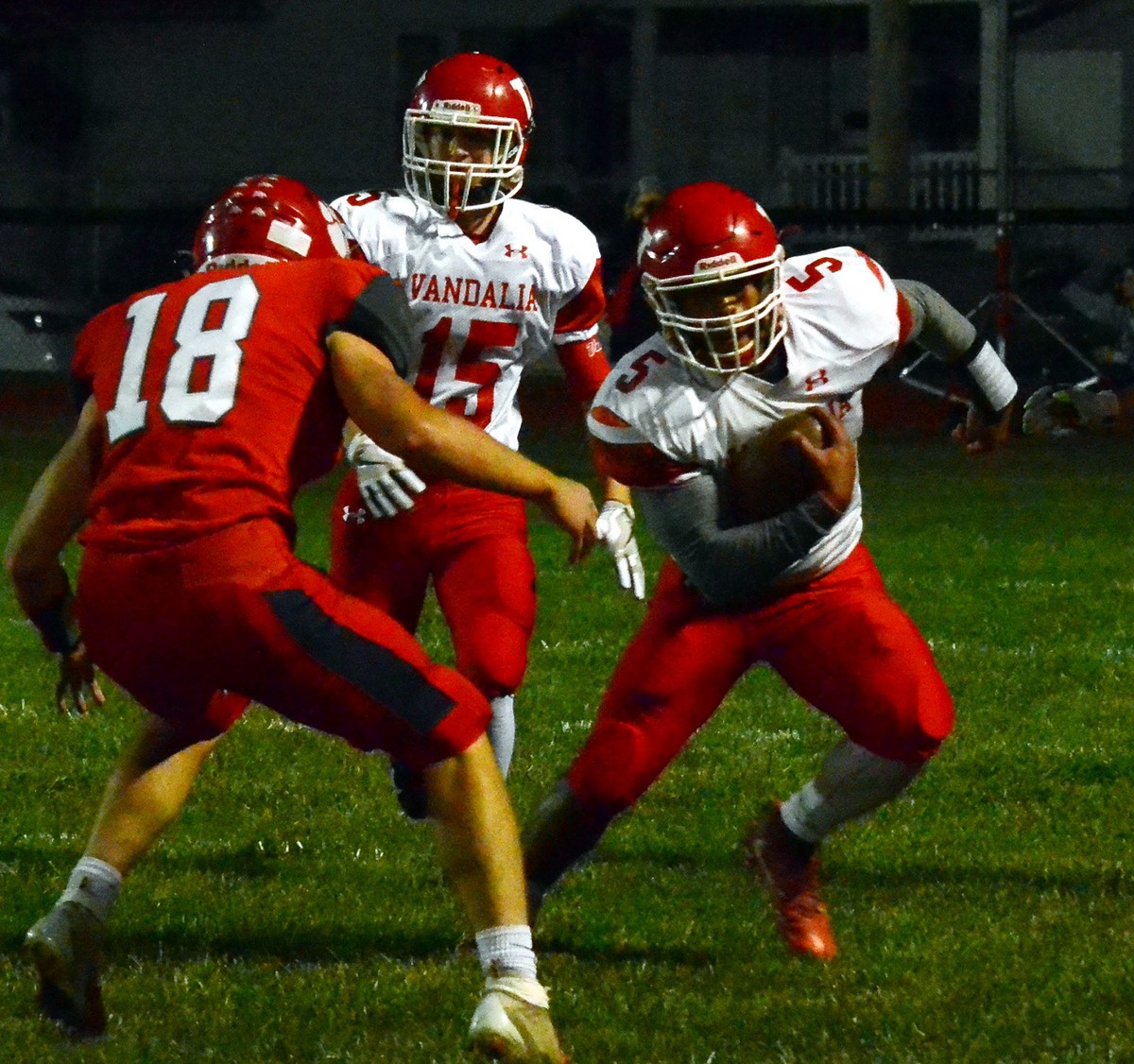 Vandalia’s Trevor Smalls avoids Staunton defenders on the way to the second of five touchdowns on Friday night. 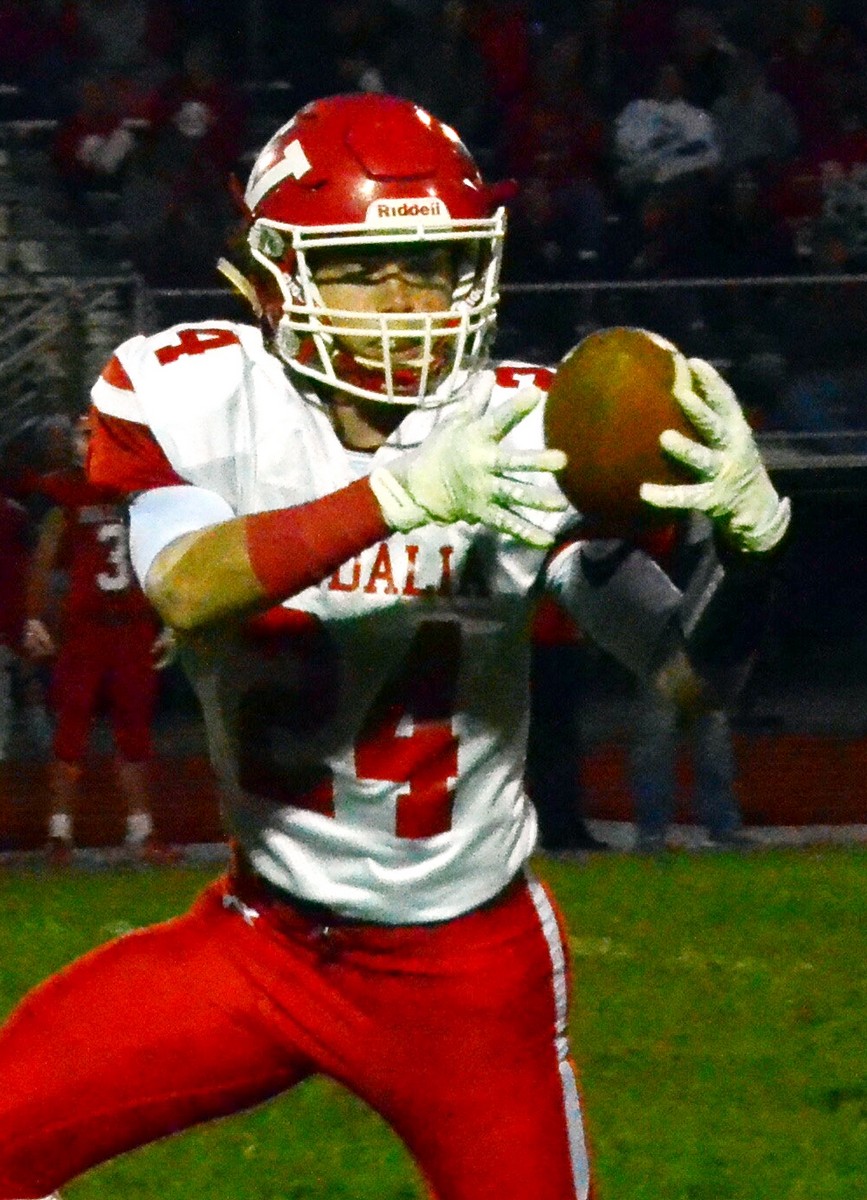 Vandal Blake Morrison momentarily bobbles a pass from Matthew Wells before heading to the end zone untouched at the beginning of Friday’s win against Staunton. Morrison had three catches for 91 yards and two touchdowns on Friday. 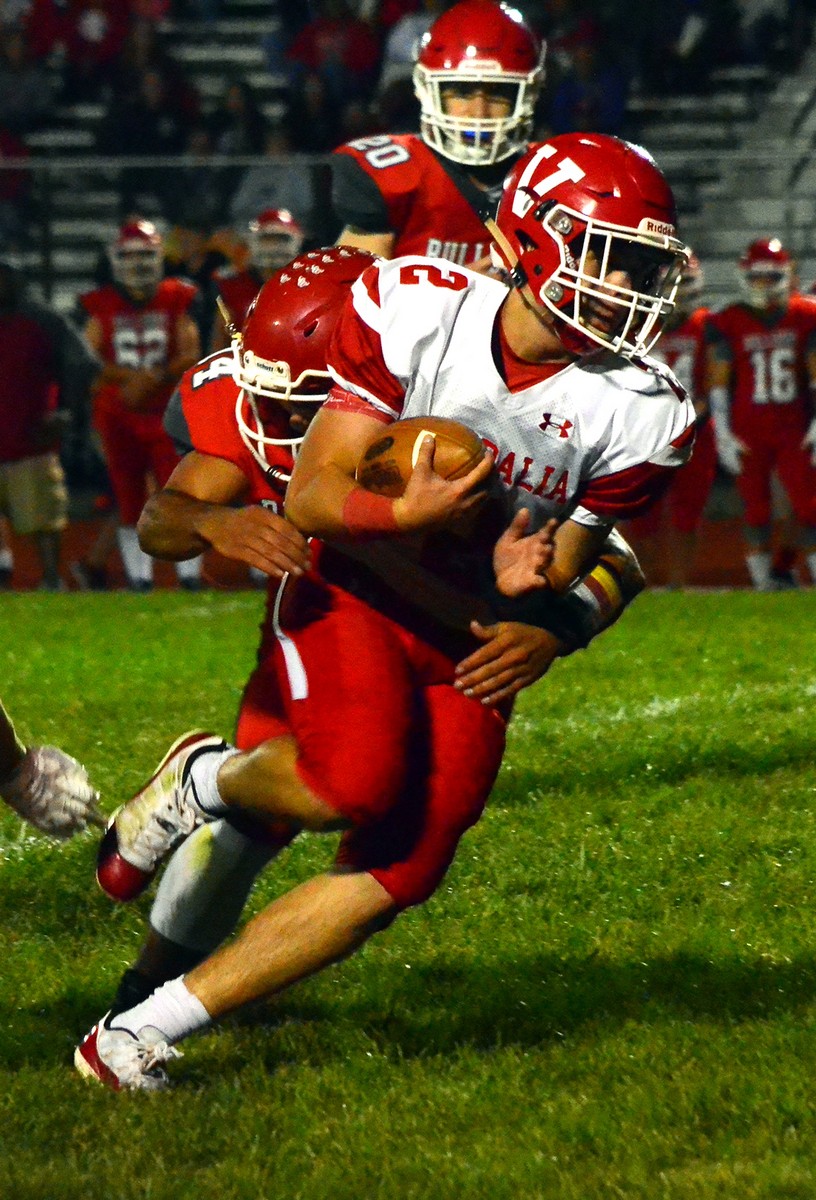 Running back Thomas Ritchey breaks off a big gain during the Vandals’ win against Staunton last Friday night. 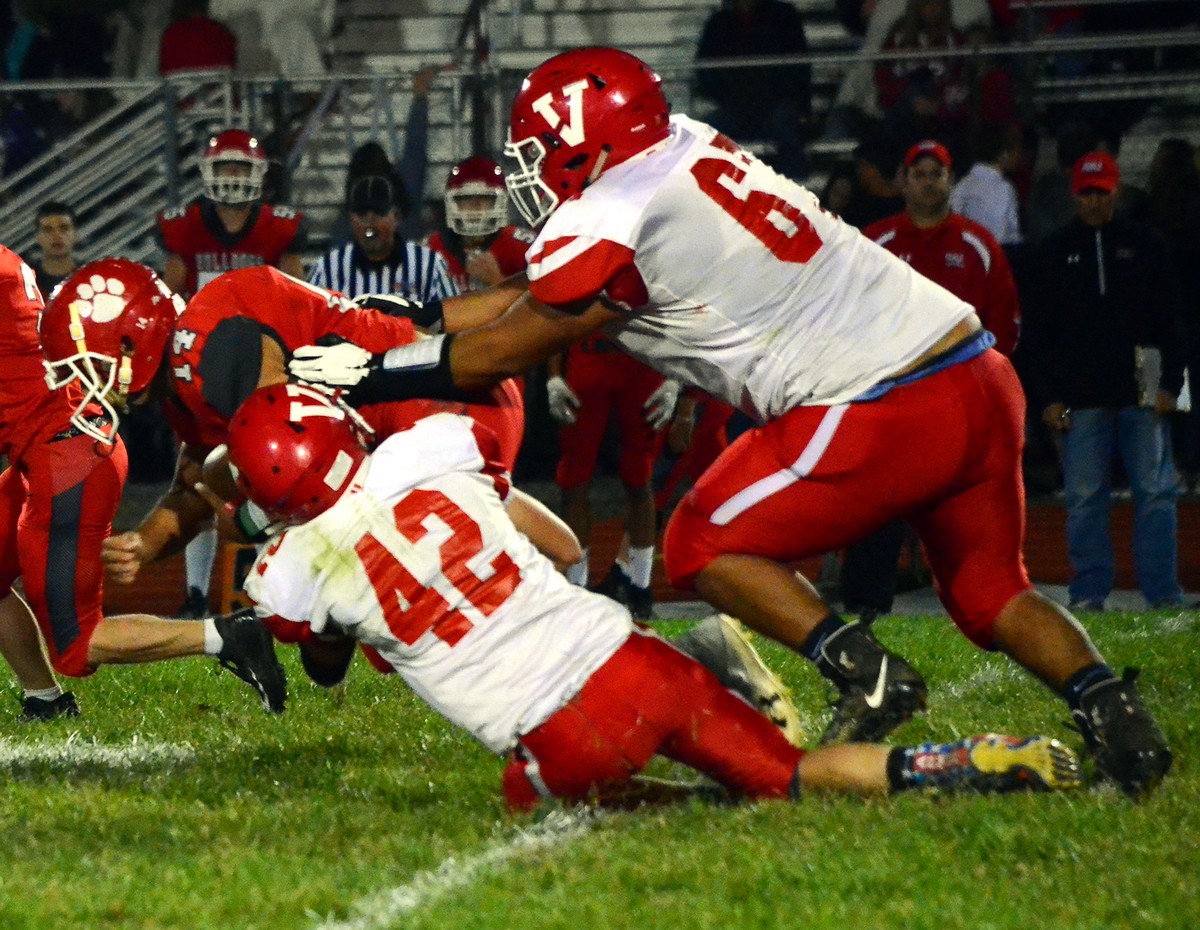