For the second consecutive week, the bulk of the Vandalia Vandals’ first-stringers played less than a half of football. And, for the second straight time, they recorded some good stats with limited playing time.

In the first quarter alone, Matthew Wells and Blake Morrison hooked up for two scoring plays, and Trevor Smalls ran for two touchdowns.
The Vandals’ freshmen and sophomore players saw extended play as Vandalia breezed to a 48-14 win against Piasa Southwestern in Friday’s homecoming contest.
The win boosted the Vandals, who dropped to No. 8 in Class 3A despite the win, to 5-0.
They attempt to stay perfect by traveling to Staunton this Friday night.
On Friday, the Vandals hit paydirt about 2½ minutes into the game, when Trevor Smalls scored on a 3-yard run, with Cameron Withers adding the extra-point kick.
Vandalia scored that touchdown after taking over on its first possession on the Piasa 15-yard line after a bad snap on a Southwestern punt attempt.
A little more than two minutes later, Smalls scored again, this time on a 67-yard scamper, with Withers again adding the extra point.
Less than two minutes later, Morrison trotted into the end zone after pulling in a pass from Wells for a 54-yard scoring play, and Withers again adding the extra point.
With a little less than three minutes left in the opening quarter, Wells and Morrison teamed up again, this time on a 14-yard pass play after an interception by Trevor Smalls, and the Vandals were up 27-0 after the extra-point attempt failed.
Many of the Vandalia first-stringers took to the sidelines before halftime, after the Vandals had completed their scoring in the second quarter with a 6-yard run by Thomas Ritchey with 10:41 left in the half, a 1-yard pass completion from Wells to Caleb Slater and another Wells-to-Morrison pass play with 5:51 left, this score coming from 7 yards out.
Ritchey’s score came after a 16-yard run by Wells and a run by Smalls to within a couple of feet of the goal line.
A holding call on second down moved the ball back to the 12-yard line, and a run by Ritchey set up the Vandals fourth score.
The final scoring drive was 78 yards on six plays, including a 27-yard run by Smalls, a 26-yard pass to Morrison and two Smalls carries that put the ball at the 7-yard line.
Though his team wasn’t tested on Friday, Vandals coach Jason Clay saw some good come out of the week.
“We played hard the first week and we executed a couple of big plays,” Clay said.
Despite many of the starters playing less than a half for two straight weeks, Clay believes his team can keep their momentum going.
“I think our kids will stay sharp.
“I think we were doing a good job during the week.
æI thought that Tuesday was a really good practice,” he said.
“It was hotter than heck, but I felt like our focus has been good. We got after it pretty good (in practice this week). We had a couple of moments where there was some bickering back and forth, but that’s kind of being a part of the team, being brothers,” Clay said.
“I think that practice set the tone for the week,” he said.
Clay was also pleased to get his younger players more time on the field.
“We got some of the other guys in there, got some other linemen in there,” he said.
“Jacob Fickes came in and had a couple of nice carries, Kyle (Phillips) had a couple of nice carries.
“If we can get that snap thing down, we might be able to march down the field a little and kind of run the clock out,” Clay said.
“It’s good to get those kids out there.
"We have quvite a few juniors who are role guys who can step in to be major contributors next year, so the more time they can get on Friday night, the better shape we’re going to be moving forward with the program,” Clay said. 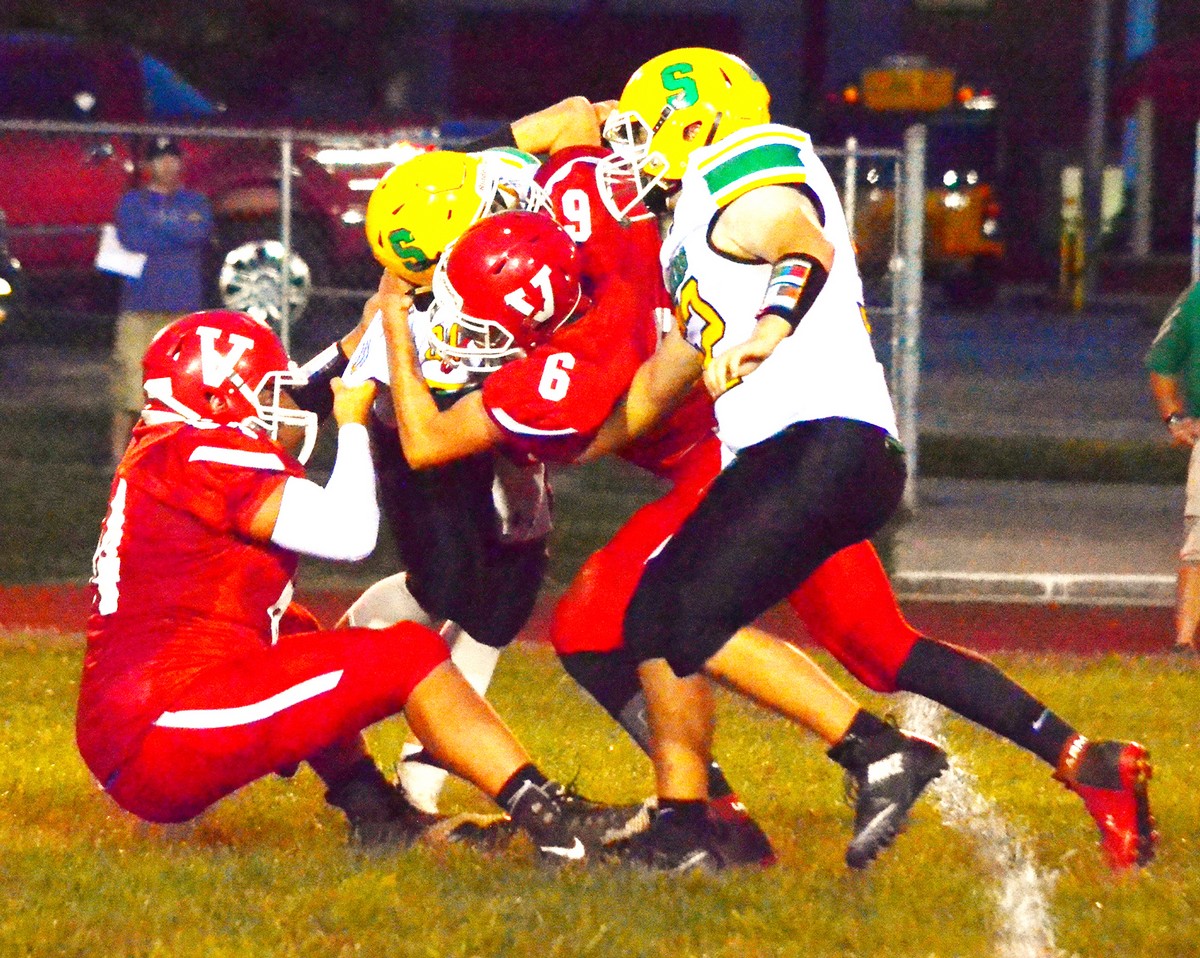 Vandalia defensive lineman Ethan Plunkett, left, gets some help from Dustin Lott (6) in pulling down the Southwestern quarterback in Friday’s homecoming win. 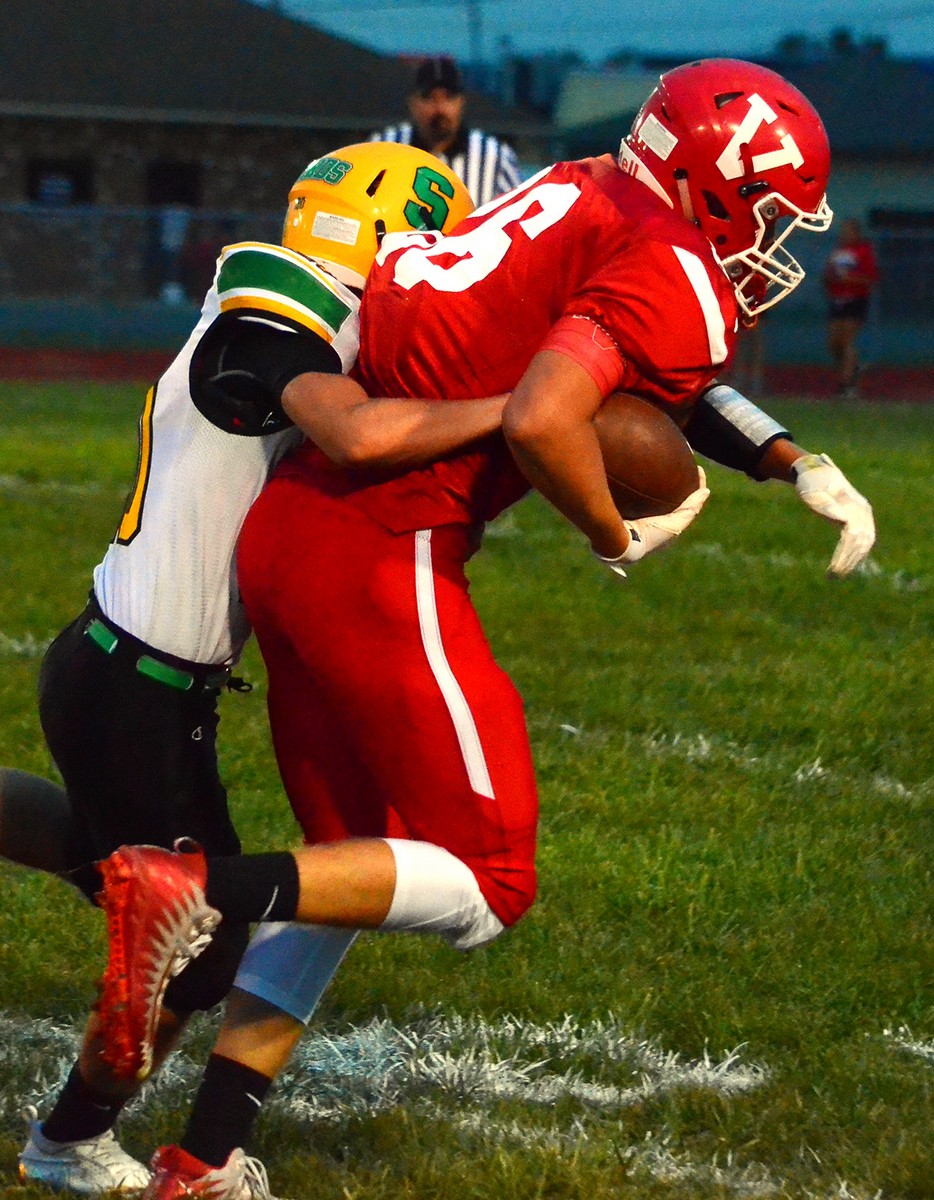 Vandalia’s Caleb Slater drags a Southwestern defender after hauling in a pass from Matthew Wells in Friday’s win. 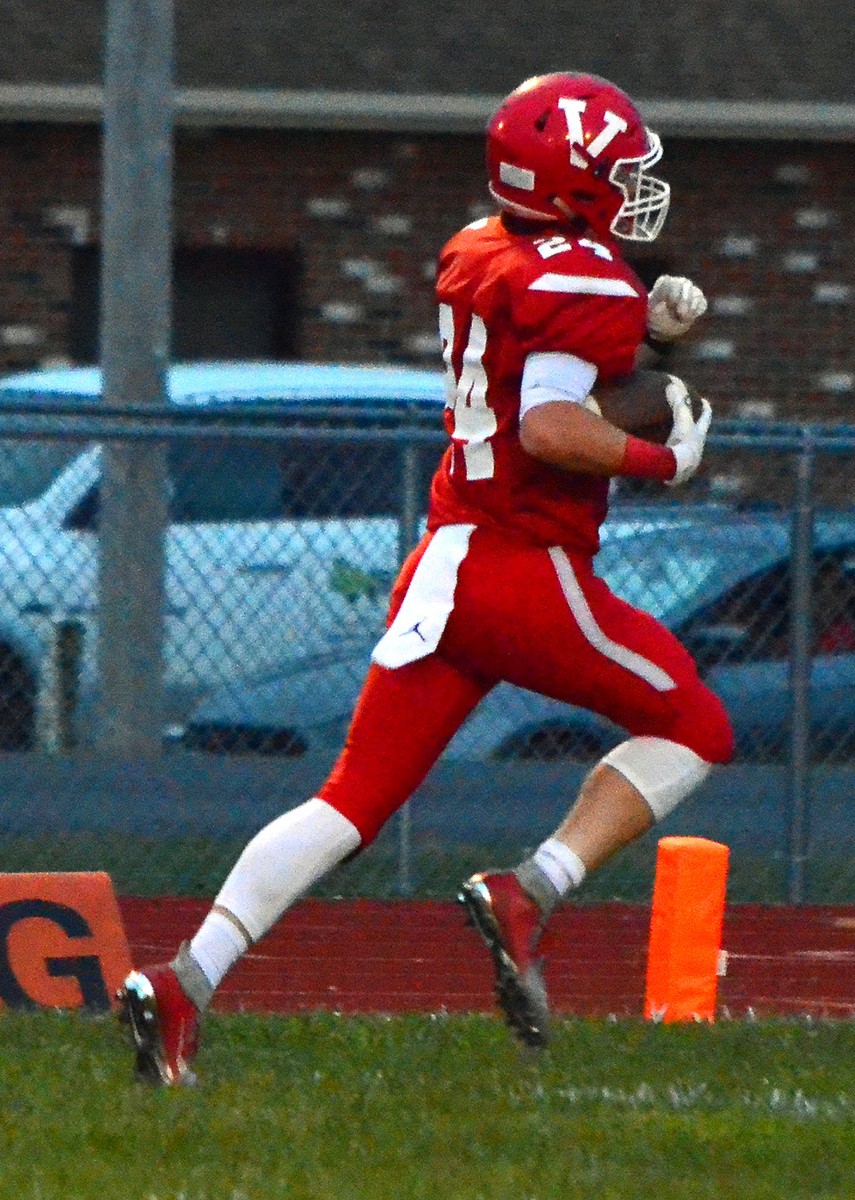 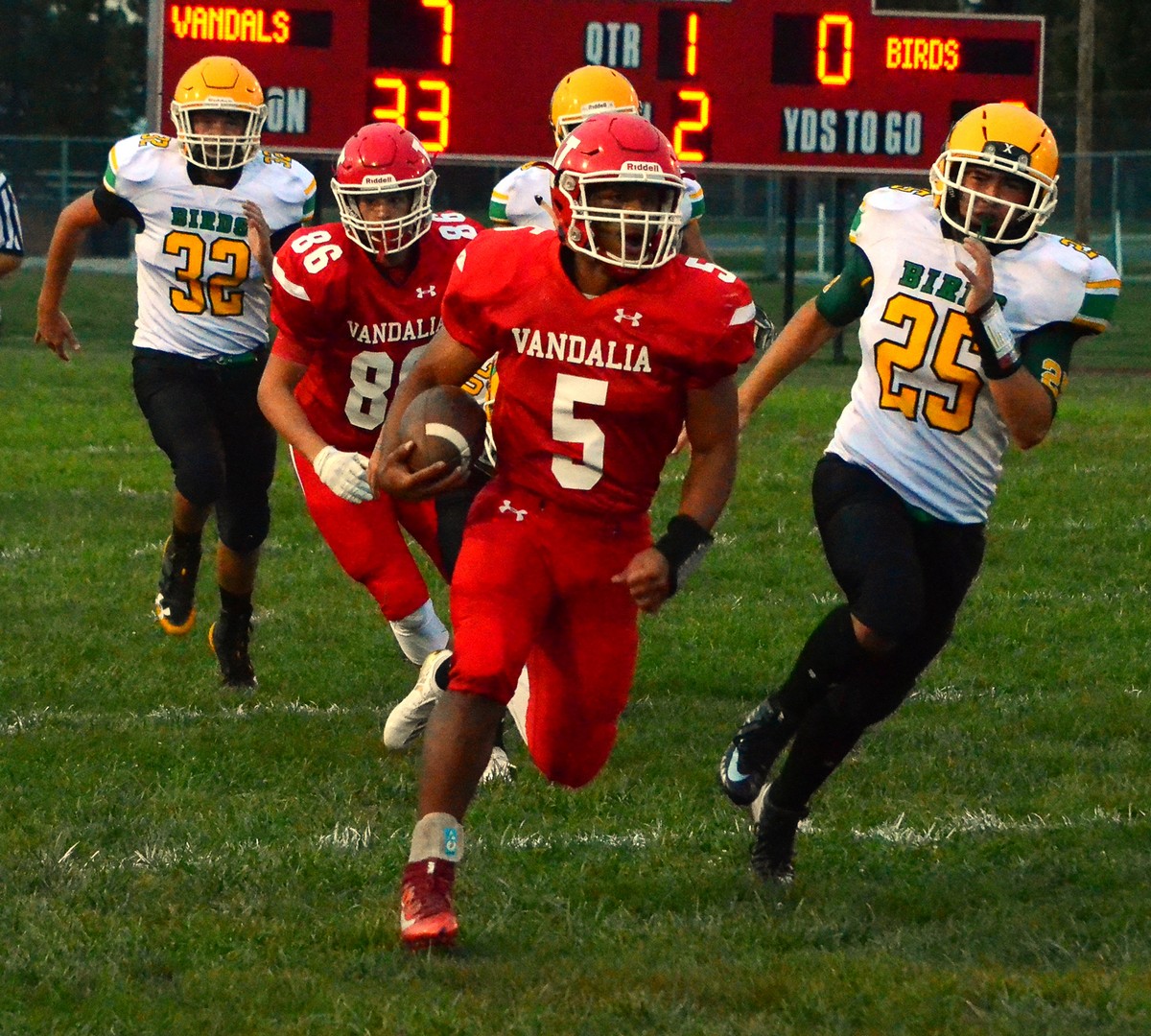 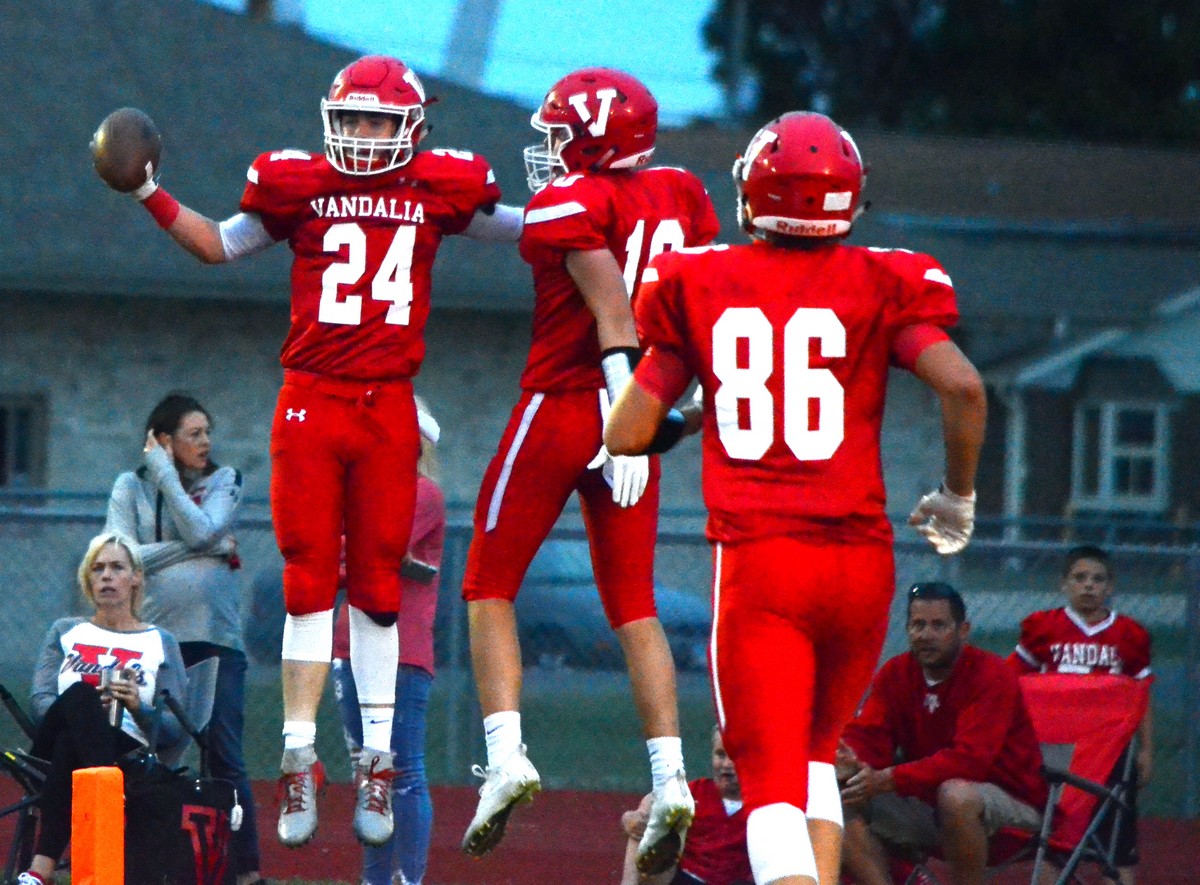