The two Vandals who provided the winning cushion on Friday night both had confidence in their abilities.

Trevor Smalls, who is now No. 2 on the all-time list of Vandals running backs with 3,528 yards, sewed up the 37-21 win with a 91-yard runback of a Greenville interception with less than a minute left in the game.
“I knew I should go down, but I saw an opening,” Smalls said on the sidelines after the score.
Smalls’ touchdown came about shortly after first-year placekicker Cameron Withers gave the Vandals the lead for good with his first career field goal, a 40-yarder.
Withers, who had been perfect on extra-point attempts after missing his first two tries, had no self-doubt when called upon for the field goal attempt.
“I’d never done a field goal in a game before, so I was a little nervous, but at the same time, I was like, I’ve done these before in practice a million times,” Withers said.
“It’s no different – I’ve got this. I went out there with confidence. I had it in my head to do it, and I did it.
“It’s the best feeling ever,” Withers said.
Those two scoring plays capped off what got started early in the contest.
After the Vandals’ defense stopped runs for a loss on the first two plays, Vandalia defensive back Bradyn Kaiser jumped a receiver’s pass route and hauled in an interception.
A pass from Matthew Wells to Thomas Ritchey with 8:28 left in the first quarter and an extra point by Withers gave the Vandals the early lead.
Greenville knotted the score after driving in from the Vandalia 5-yard line and recovering a fumble in the end zone.
The Vandals regained the lead with 3:09 left in the quarter on a 4-yard run by Smalls and extra point by Withers.
They went up 21-7 when Wells and Garrett Austin connected for a touchdown with 14.4 seconds left in the opening stanza.
Greenville got within seven on a 2-yard run by Jack Woods after a high snap on a punt attempt by the Vandals gave the Comets possession on the Vandalia 9-yard line.
The Comets were driving for another score just before half when their last-ditch attempt was a pass broken up by Blake Morrison and Dustin Lott.
The Vandals scored their fourth touchdown in the fourth quarter when Wells was driven out of the packet and threw a bullet to the front corner of the end zone, caught by a diving Morrison.
Wells and Morrison also hooked up for a touchdown pass with just over four minutes left, but the score was called back on an ineligible receiver flag.
Then came the Withers field goal and Smalls’ return of an interception for a touchdown.
Wells completed six of 14 passes for 116 yards. With 2,478 passing yards in his 15-game varsity career, Wells now is fourth on the school’s all-time passing list, passing Doug Reams, who had 2,472 yards in 24 games.
Wells is now 72 yards from tying No. 1 on the list, Michael Whitten, who threw for 2,550 yards in 21 games.
Smalls gained 107 yards on the ground, giving him 3,528 yards for his career (25 games) . He ranks second on the Vandals’ all-time list, with Travis Blain atop the list with 4,340 yards in 31 games.
“It wasn’t a clean game,” coach Jason Clay said. “It’s always like that (with Greenville).
“Our kids have a lot of heart. We don’t have any heart issues,” he said.
“I asked before the game to play for their brothers, play for their town. They’ve got their town’s name on their chest for a reason.
“There have been a lot of people play in this game. It’s a big rivalry, and I told them to give they everything they had … and they did that,” Clay said.
“We’ll look at the film, we’ll find mistakes, we’ll find missed assignments, but I don’t think we’re going to find a lack of heart.
“I’m proud of our kids and the heart they displayed, and the character,” he said. “And their kids are good ballplayers, too; it was a good game.”
Time after time in the game, he said, the defense stepped up when it needed to.
“Our defense just kept making plays. We played a lot of nickel (defense) and dared them to run. They got a few yards running, but we’re trying to stop the pass, and our kids did that.
“We had a lot of guys flying around the football and tackling,” he said.
“It was a great game plan by our coaches and great execution by our kids.”
Clay saw the need for some work on offense.
“We’re going to have to run the football better. We got penalties that put us behind the chains and made us more predictable; we had to throw there,” he said.
“Luckily, our defense bailed us out.
“They made mistakes, too. We just have to go back and learn from ours,” Clay said.
In the second half, the Comets gained the momentum with a couple of scores while holding the Vandals at bay.
And driving for another score, the Comets were nullified by one of the defensive stands that Clay talked about, with that end-of-the-half pass being knocked down at the goal line.
“They had all of the momentum in the world, and I felt like that righted the ship going into halftime.
“We go into halftime tied and it may be a different story,” Clay said. Vandalia’s Trevor Smalls heads for the end zone after intercepting a Greenville pass near the end zone late in the Vandals’ 37-21 win. Vandalia’s Bradyn Kaiser comes down with an interception in the first half of the Vandals’ win at Greenville. 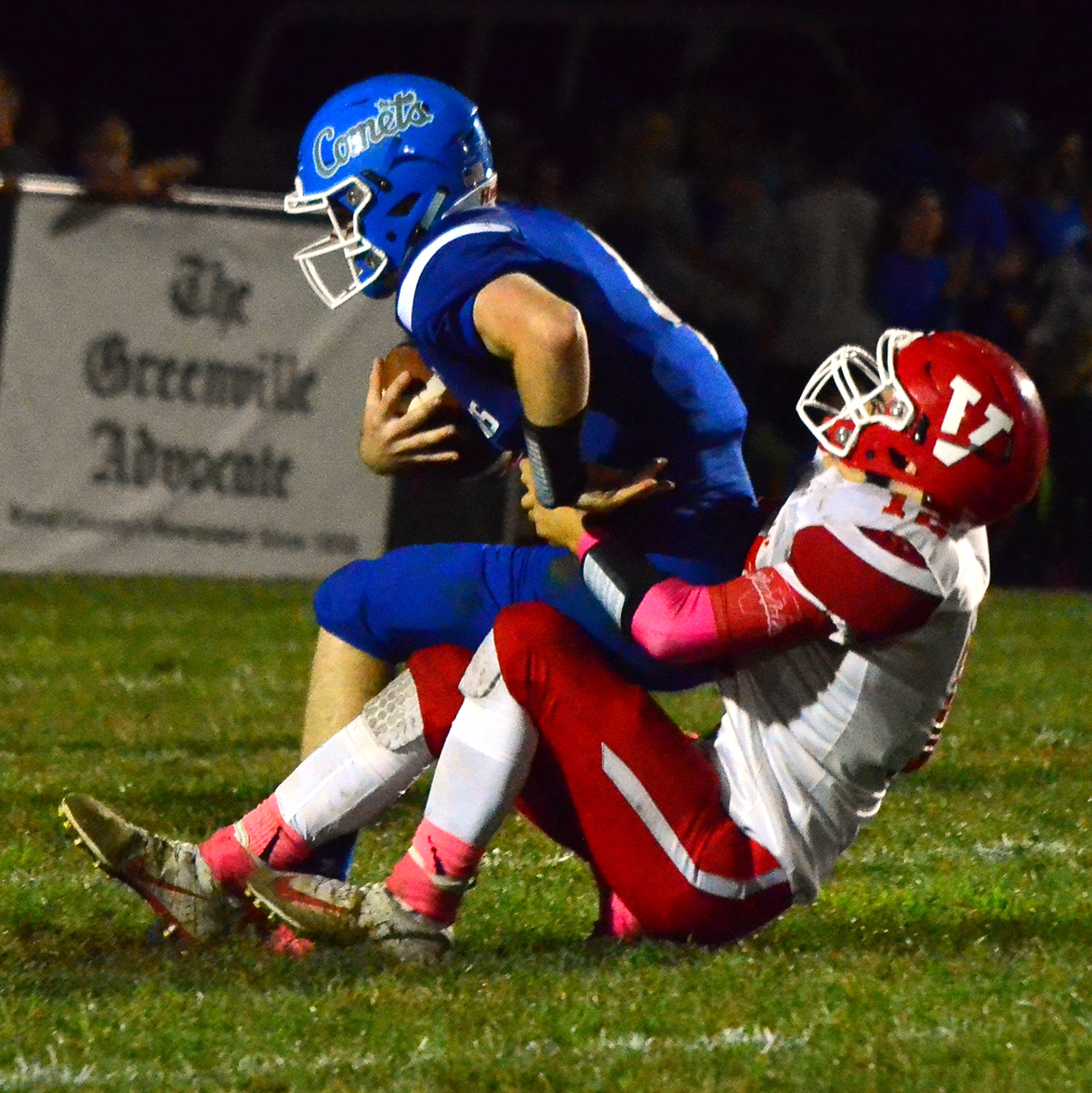 Cameron Withers is mobbed by teammates after booting a 23-yard field goal in the fourth quarter of Friday’s win against Greenville. 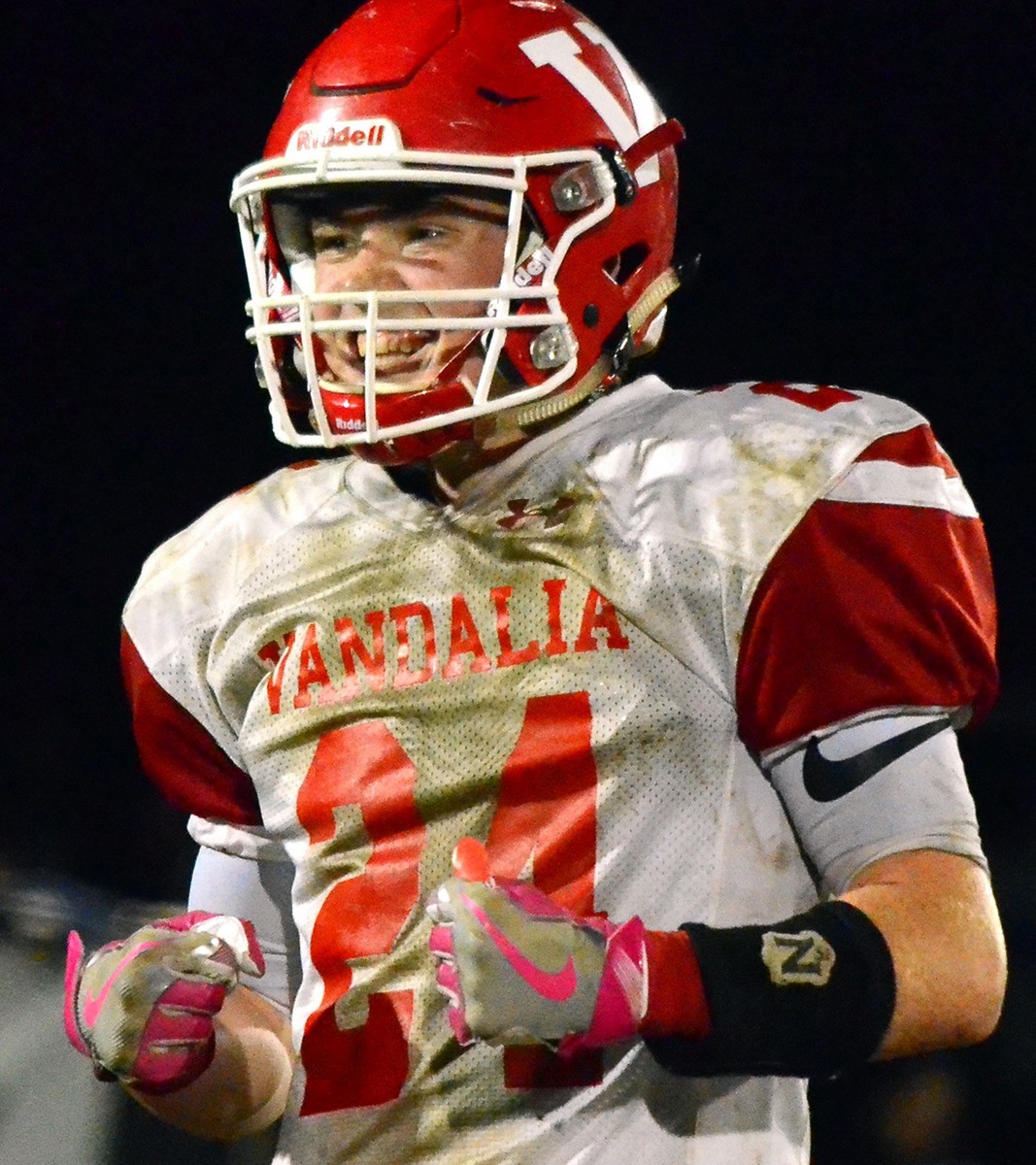 Blake Morrison is all smiles after the Vandalia force and recover a fumble on the kickoff at the end of the game to seal Friday’s win.

Garrett Austin outruns a Greenville defender on his way to the end zone.