If Gillespie went into Friday’s season opener thinking that the Vandals would be passing less this season, after the loss by graduation of all-stater Marcus Zimmerman, Matthew Wells and his band of receivers showed them otherwise.

And by using all of those receivers, Wells countered Gillespie’s plan to focus on stopping Vandals running back Trevor Smalls.
In the 30-22 home win, four Vandals were recipients of passes from Wells, and three of those hauled in touchdown passes.
The fourth TD in the opener came on a from Smalls, who returns for his final year after amassing more than 2,250 yards rushing his junior year.
As they prepared for the game opener, the Vandals knew that Gillespie would focus on Smalls and that a passing game would be important.
“I think we showed that we’ve got four guys who can catch the ball and make plays,” Vandals head coach Jason Clay said.
“Everybody had catches.
“They were kind of loading the box, trying to take away Trevor, and why wouldn’t you – that’s just common sense.
“People will load the box on Trevor, then we’ll throw it,” Clay said. “We’ve got a quarterback who can throw the ball, we’ve got kids who can catch it and we got yards after the catch.
“We’ve got to prove to people that we’re not scared to throw it, we will throw and we can throw it, and I think we proved that tonight,” he said.
Gillespie took advantage of a facemask penalty to advance to the Vandalia 16-yard line on its opening drive and scored with 7:13 left in the opening quarter.
The Vandals responded with a 63-yard drive that ended with Wells throwing to a tightly covered Garrett Austin with 1:55 left in the quarter. They added the two-point conversion when Wells and Austin hooked up again.
After Gillespie went back up on top 14-8, Wells fired a strike to Morrison for a 10-yard score, and the two-point conversion gave the Vandals a 16-14 lead.
Vandalia extended their lead right after halftime, with Wells connecting with Caleb Slater on a 40-yard score. The two-point conversion failed, and the Vandals led 22-14 with midway through the third quarter.
Vandalia’s final tally came with about 8½ minutes left in the game when Smalls bounced off of several Gillespie defenders before scoring on a 19-yard run. A pass to Morrison on the two-point conversion gave the Vandals a 30-14 lead.
Against a defense committed to keeping him in check, and despite poor running conditions due to heavy rains earlier in the day, Smalls managed to accumulate 117 yards on 20 carries.
Gillespie scored on a 1-yard keeper by quarterback Joey Carter and a two-point conversion with 2:25 left in the game narrowed that lead to eight
Instead of trying an onside kick, Gillespie kicked off deep, with hopes of holding the Vandals to a three-and-out, but the Vandals ran off six plays to end the game.
“We had our hands team out there (upfront), so they might have thought that they could pin us down, and they had two timeouts left,” Clay said.
Wells completed 14 of 16 passes, with one of the incompletions being an out-of-bounds catch.
That performance showed Clay that the junior is improving in his second year as the Vandals quarterback.
“Last year, Matthew made a lot of plays, but he made a lot of mistakes, too,” Clay said. “We’d have a big play, then we’d make a mistake at a critical time.
“I just feel like that’s going to be the big thing this year, that he’s already showing me, that we’re on the same page with a lot of things that we’re seeing, he’s seeing it, too,” Clay said.
With that experience, “you come out there and have that poise.”
On the extensive use of a passing game, Clay said, the Vandals “have got to be aggressive on the play calling. If they’re loading the box, you can’t just hammer your head up in there and try to get stuff.
“We can, if our line holds up, be a passing team, getting guys the ball,” he said.
“We had four guys with catches, and we’ve got a couple more who can catch the ball,” Clay said
“If we have weapons at every spot, and we showed that, it makes it tougher on the defense,” he said.
Clay was pleased with what he saw from his defense in the final two quarters.
“The defense did a really nice job in the second half,” he said.
“I feel like our defense rose up in the second half.
“We had a tough time getting off the field in the first half, but we made a lot of plays in the second half and the defense did a nice job of shutting them down.”
Having gotten one game under their belt, Clay said, the Vandals can better see what they need to do to improve.
“It’s the first ballgame. You’ve got that out of the way.
“The goal is to always win the game,” he said. “Obviously, there were some mistakes on our side and mistakes on our side; they made a lot of good plays and we made a lot of good plays.
“I told the team afterward, you’ve got to take it one week at a time,” he said.
“We’ve achieved a goal of a win, and then you move on to week 2.
“The biggest chance, I feel, of the season to make a big jump is from week 1 to week 2. You finally play a game, you get it on film, (and) you see your mistakes and what you need to correct,: Clay said.
“I think there’s a lot of good stuff to take from tonight,” he said. 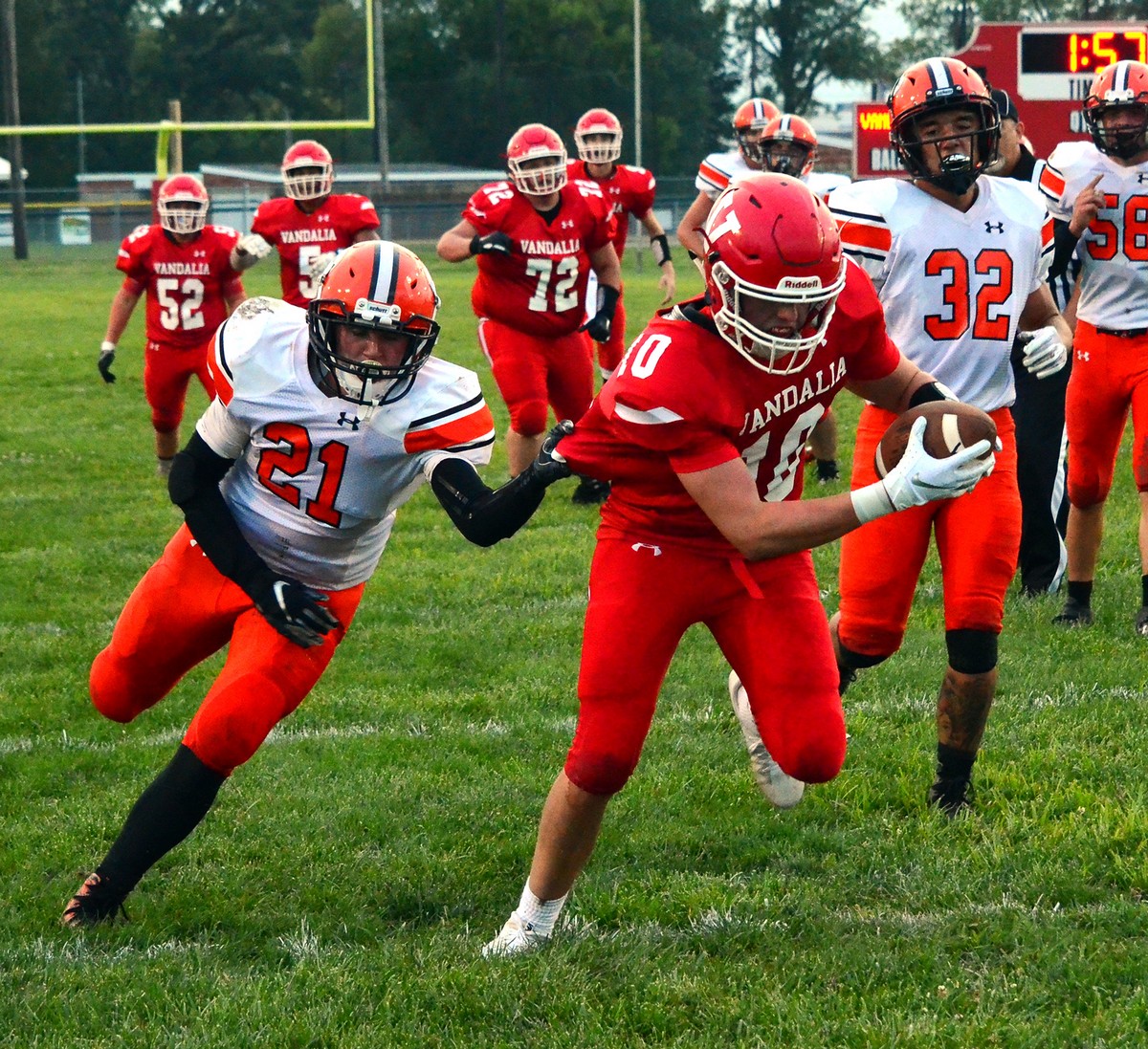 Garrett Austin (10) pulls away from a Gillespie defender to score the Vandals first touchdown of the season. Austin followed up the touchdown by hauling in a two-point conversion pass from Matthew Wells. 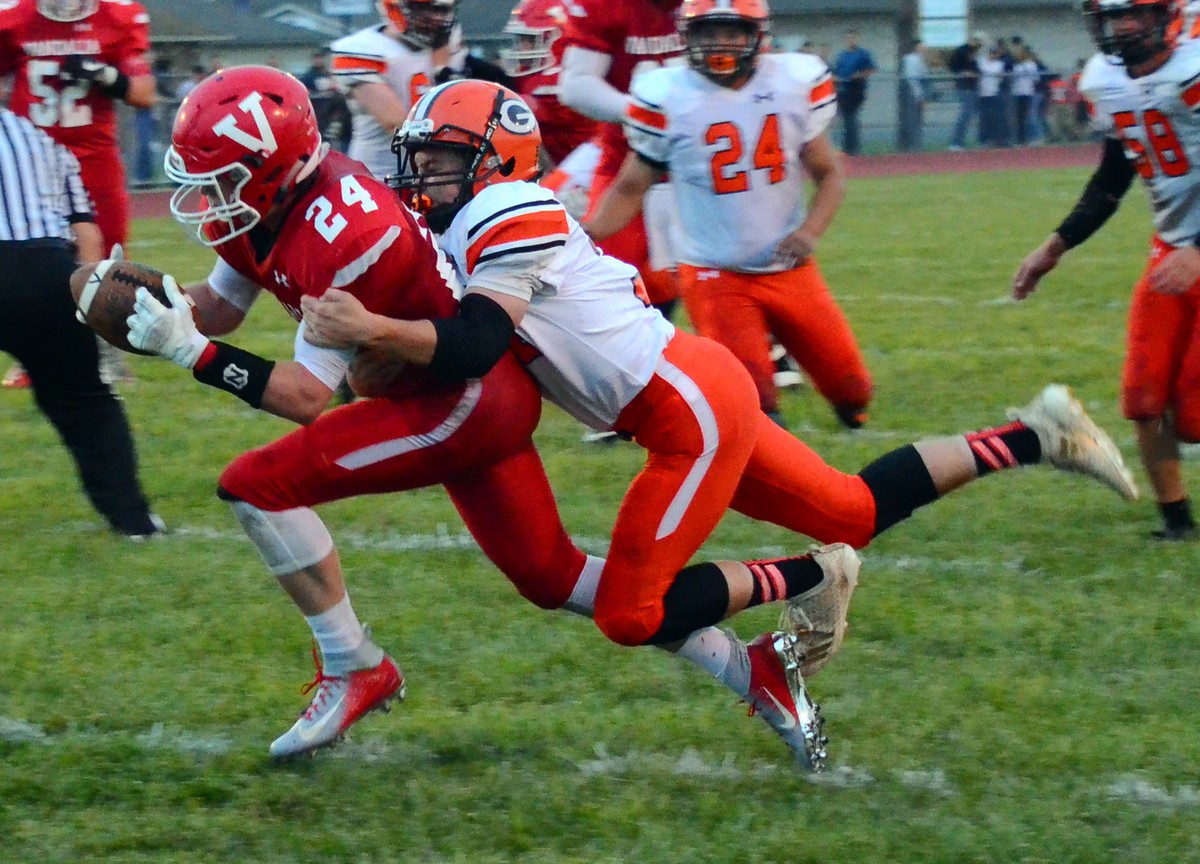 With a Gillespie defender hanging on him, Vandalia’s Blake Morrison snares a pass from quarterback Matthew Wells in the second quarter of the Vandals season-opening win. 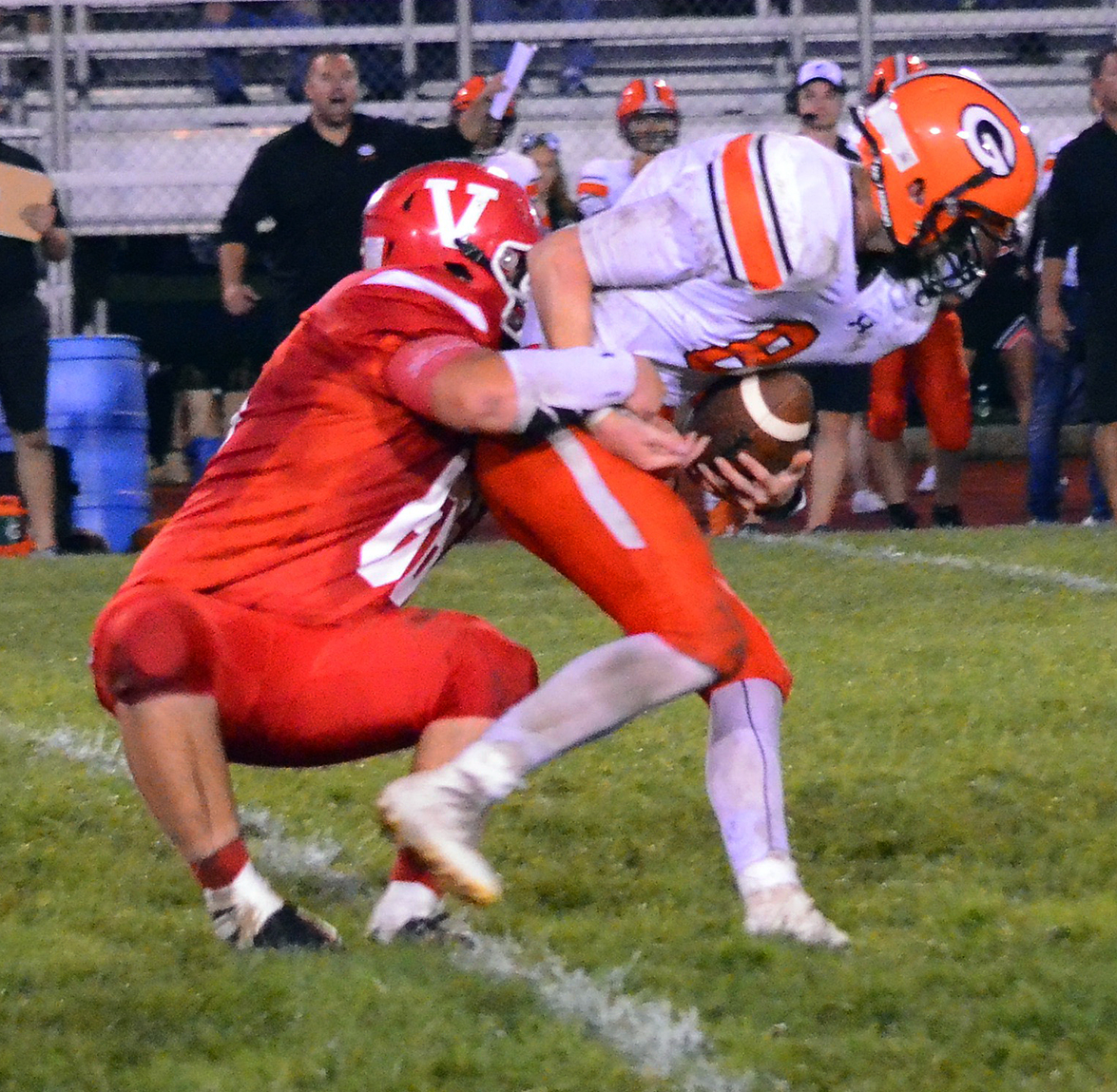