As she was settling into her starting block of the 300-meter low hurdles at last Thursday’s sectional track meet, Brownstown/St. Elmo’s Claire Wilhour heard the public address announcer say that she had just been bumped from second to third place – and a spot in the state meet – in the long jump.

Having already finished in third place in the 100-meter high hurdles, Wilhour realized that her only chance to make a return trip to the IHSA State Track Meet was the race she was about to run.
“I thought, ‘Oh, I’ve got to run good now,” said Wilhour, a Bomber sophomore who finished seventh in the 300-meter hurdles at state last year after finishing second in her heat.
Wilhour did just that, finishing second in the 300-meter hurdles at Altamont last Thursday with a time of 46.87.
“I’m really excited” about making a return trip to the state meet, she said, adding, “I have a lot of things to work on this week before state.
“I didn’t run the best race coming across a few hurdles, but it’s got me a pretty good time for state, so I’m pretty confident about it,” Wilhour said.
About whether she felt any pressure after making it to state last year, she said, “A little bit, (but) it just gives me the opportunity to rise up and overcome the pressure.”
What makes Wilhour feel good about her chances at state is, “I didn’t run a 47 until sectionals last year and I got a 46 here (today).
“I didn’t run a 46 until the state finals last year,” she said. “I had a 47 in the prelims.
“So, I feel like I’m on a good track.”
While Wilhour will be making her second trip to the Eastern Illinois University campus in Charleston this week, a Patoka junior will be making her first.
Keocea Sarchet finished third in the shot put, with her toss of 36 feet, 5.75 inches exceeding the state’s qualifying distance of 35.08.
“I’m pretty excited,” Sarchet said. “I just want to cry.”
Her qualifying toss, she said, “is one of my best.”
Sarchet, who has been throwing the shot since seventh grade, was optimistic about advancing from the sectional meet.
“I thought that I had a pretty good chance,” Sarchet said.
Wilhour just missed also advancing in the long jump, in one of two ways.
After scratching on her first two jumps, Wilhour went 16 feet, 1.75 inches on her third.
That, temporarily, gave her in second place and a spot at the state meet, with the top two in each event earning a place at state.
But meet officials announced, as Wilhour prepared for the 300-meter hurdles, that they had overlooked a jump of 16 feet, 4 inches by Newton in the prelims. That bumped Wilhour to third place.
Wilhour also feel an inch and a quarter short of qualifying distance of 16 feet, 3 inches for the long jump.
“It’s all right,” she said about failing to qualify in the long jump. “It is what it is.
“I just went out there and gave it my best,” Wilhour said.
Wilhour wasn’t the only area athlete just missing out in a chance to compete in a state meet event.
Vandalia’s Karsyn Garrison finished third in the triple jump at 31 feet, 10½ inches. The state qualifying distance was 33 feet, 7 inches.
Overall, Teutopolis won the meet with 115 points. Brownstown/St. Elmo finished 11th with 20 points, Vandalia was 14th with eight points; and Patoka was 15th with six points.
The placing results for other area athletes are:
• Wilhour-100-meter hurdles, 16.68 seconds. Qualifying time-16.52 seconds.
• Katie Tarkington of Vandalia, sixth place in 100-meter dash, 13.81 seconds; and sixth place in 200-meter dash, 28.82 seconds.
• Willow Brown of Brownstown/St.Elmo, 12th place in 400-meter run, 1:13.94.
• Shot put – Macy Cripe of Brownstown/St. Elmo, ninth place, 29 feet, 2.75 inches; Arizona Leonberger of Vandlaia, 23 feet. 9.5 inches; and Jaida Doehring of Vandalia, 25th place, 20 feet, 8.50 inches.
• Discus – Sarchet of Patoka, eighth place, 93 feet; and Doehring of Vandalia, 17th place, 68 feet, 8 inches; and Cripe of BSE, 22nd place, 60 feet, 7 inches. 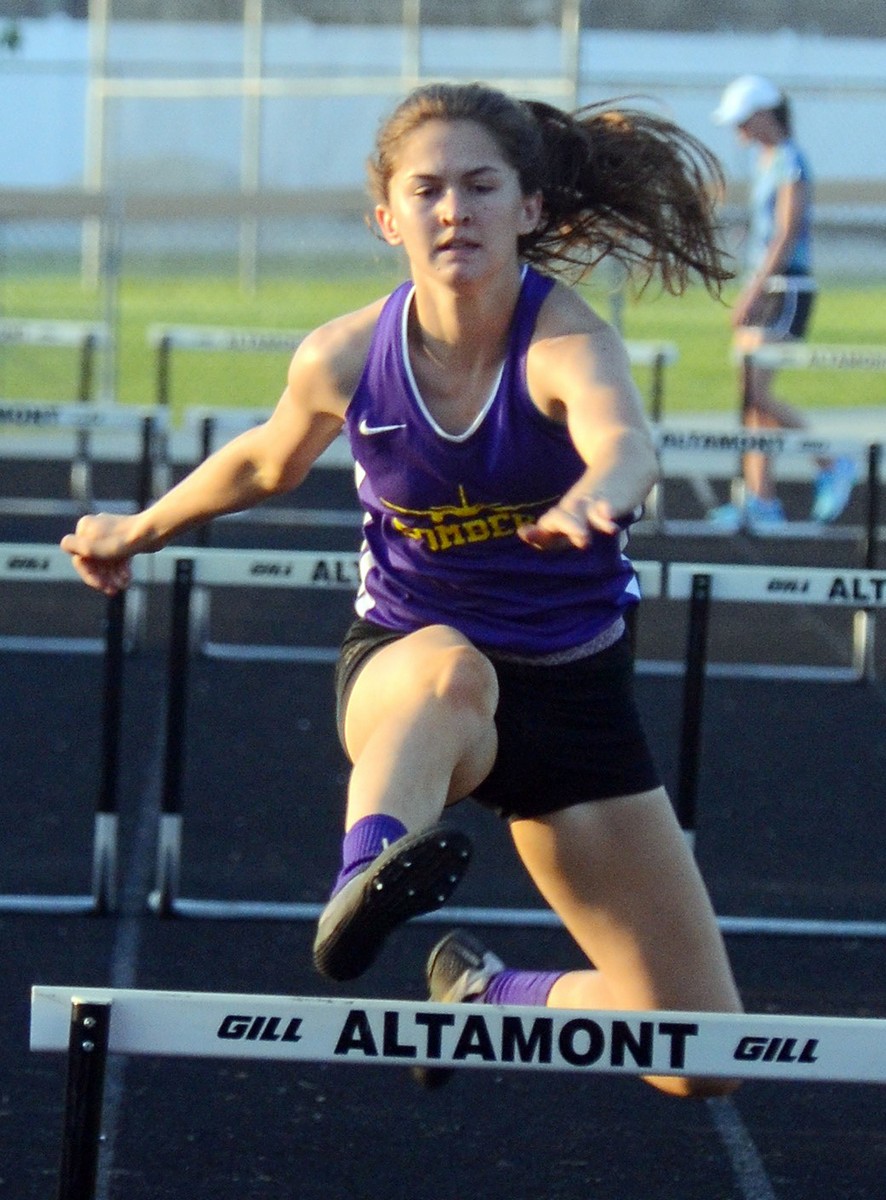 Claire Wilhour of Brownstown/St.Elmo is shown on her way to a second-place finish in the 300-meter hurdles at the Altamont Sectional. 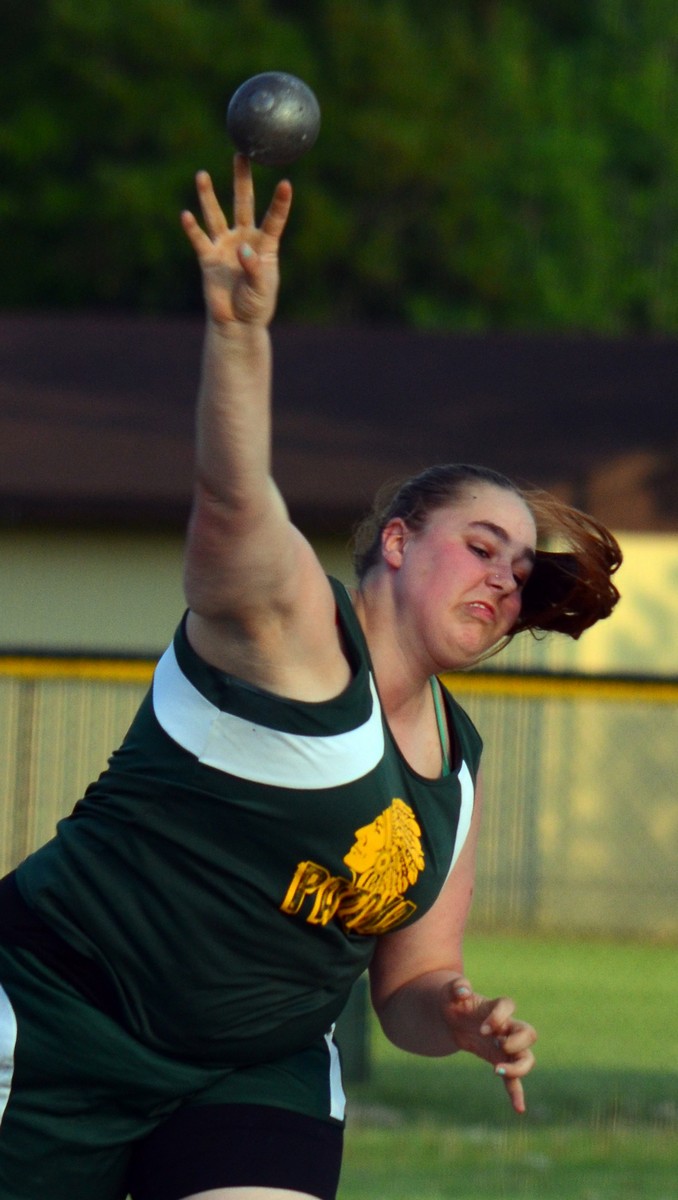 Patoka’s Keocea Sarchet qualified for the state meet in the shot put with this toss at the Altamont Sectional.