The Arm Prairie Christian Church was built in 1879, with the completion of construction possibly running into 1890, roughly making the church building close to 140 years old.

It is in a picturesque rural setting, a quaint, shining white country church, complete with the steeple and bell to invite people from around the countryside to enter its doors and join the congregation of neighbors, friends and, perhaps, travelers and strangers, stopping in for a time of rest and replacement of their tired bodies and spirits.
It is believed that the church bell was made in the late 1890s or early 1900s.
As one views the setting today, it is easy to imagine the horse drawn buggies and wagons bringing families to the church as the bell rings in welcome.
However, many years ago, the bell stopped ringing. It was believed that the bell had gone missing.
This is the story of the missing bell and how it once rang again on Easter Sunday morning this year, again sounding it’s lovely tones with an invitation to enter the little church’s doors to give thanks and praise our Creator, who still blesses us with miracles.
Rod Rogers, who pastors the Arm Prairie Christian Church, and his wife, Sissy, told the story of the bell.
Sissy said that she began attending this church in 1996. “Strawberry Boggs and Lily Campbell invited me,” she said. Rod started coming in 2010.
At that time, there was no sign nor sound of a church bell.  “The bell was believed to have been stolen or missing,” Sissy said.
In 2016, the roof of the little church was in need of repair, and the congregation and the community shared in the efforts to raise funds for the repairs.
In he process of the repairs, John Horst Construction found the bell, which had   apparently been covered up by previous construction or repair many years before.
The old bell was still hanging in the belfry – forgotten, silent and hidden from view.
Rod wasn’t at the church when the discovery was made and said that when he walked up toward the church, he noticed John and the workers were just sitting on top of the roof … and smiling.
He asked them what they were smiling about and they told him they had discovered the missing bell.
There was no rope attached to it, and it is believed, that as there was no machinery or equipment available in those days to easily get to the bell to replace the rope, the old bell just remained silent all of those years.
They attached a cable to it so the old bell could once again be rung.
Rod and Sissy said that it brought tears to their eyes to hear the old bell ringing, doing what it was created to do – call the people to the church.
And the Cross
Pastor Rob had also expressed the desire to have a cross on top of the belfry.  John Horst made a beautiful wooden cross,  and Clair Zimmerman climbed it to the top of the roof on his shoulders and placed it securely on top of the old church bell’s home.
As of this date …
… Sissy said, the foundation is repaired and the church has a new roof, as well as other facilities, all of which has enhanced the picturesque setting among the trees and other wonders and beauty of God’s creations, like a shining, precious gem.
They plan to replace the windows in the future.
And the Congregation…
… which, although not high in count, is high in what counts – faith,  friendliness, and dedication, not only to their Lord and Savior, but also dedicated to his house of worship. And they welcome all to enter and worship with them.
Just listen for the Arm Prairie Church Bell as it joyously tings forth again. 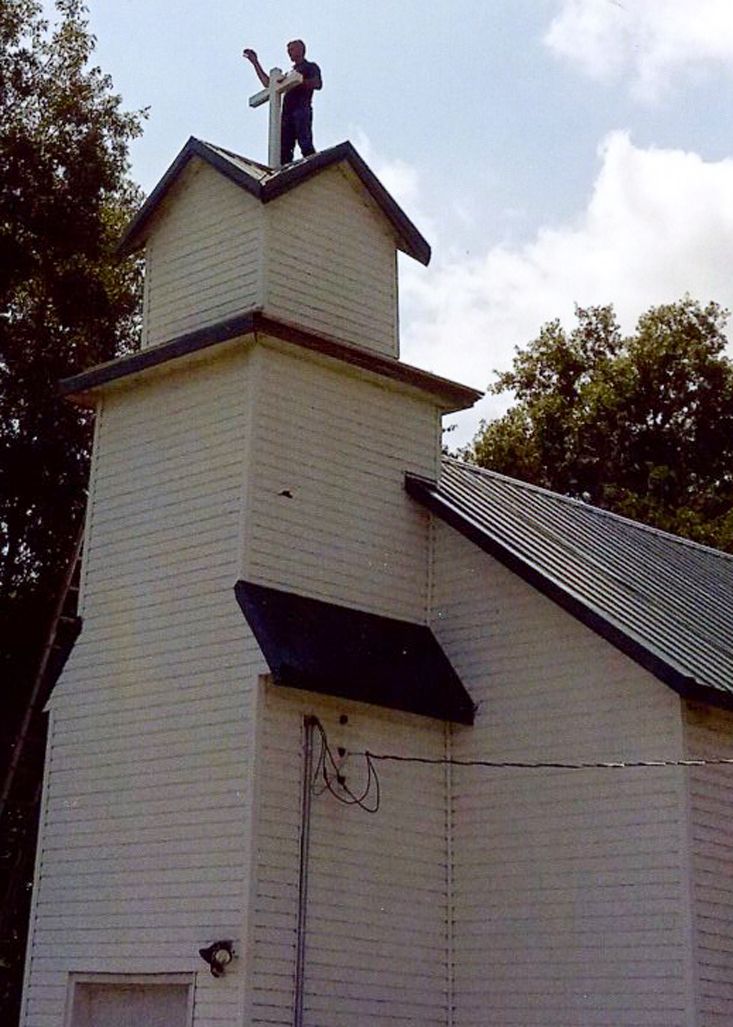 Arm Prairie Church again is using its bell, and now has a new cross on its steeple. 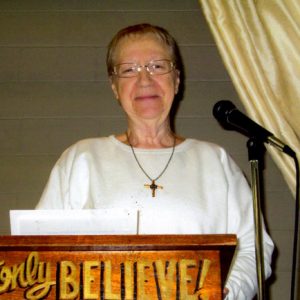