Sometimes, more often than not, it is difficult to turn the page, shut a door behind you and step a across a new threshold to make new memories for one’s self and others.

It takes faith and courage, which the congregation of the First Christian Church of Brownstown demonstrated in its decision and, as one, took the first step to fulfilling a need – recognizing the need and taking it to God in prayer, trusting Him for guidance, working and praying, individually, but as one, and celebrating the answer provided for their prayer, as did the builders of the old church many years ago.
It is Told …
… that soon after the Civil War, two men traveled from Mattoon to St. Louis on horseback, to preach the gospel. While making one of these trips in the winter, a severe snowstorm came up and they were forced to stop traveling.
They stayed overnight at a farm house, four miles north of Brownstown, with the Arnold family.
The next day was Sunday, so a worship service was held in the home. Neighbors became   interested, and services were held in different homes.
Several years later, a building was erected five miles  north of Brownstown. This was the first Christian Church established in this section of Illinois and was called Liberty Christian Church.
The gospel spread and the citizens of Brownstown became interested, and in 1871, a small building was erected in the village on the north side of the railroad tracks.
The congregation grew, primarily through revival meetings, until in 1910, when the church had a Sunday school at attendance of 267. It was decided to build a larger building on the south side of the tracks.
Ground was purchased where the old (present) building now stands, and on May 5, 1912, the building was dedicated to the Lord for worship.
And Now …
… more than 100 years later, the congregation of past and present is still strong, faithful, and trusting, as they have built yet another church building, which they dedicated recently, after  bidding the old precious building a proper  and memory-filled farewell, turning the page, but not closing the book.
The week of Saturday, March 24, was at time of celebration for Brownstown First Christian Church. A “Building Farewell and Memories Night” was held with a brown paper bag supper for everyone and a service following.
Although the new building is not quite ready for occupancy, this seemed to be a good time to do this.
The minister, the Rev. Nathan Brands, welcomed the gathering and led in prayer, followed by congregational singing of “This World Is Not My Home.”
Duane  Willms read the names of past ministers and their years of service, and people who were baptized or married by them.
Many were there who had attended as children or youth. Letters were read from people who could not attend the event.
One letter told of many years ago when the Golden Bells Children’s Choir was rehearsing in the upstairs, singing, “Joshua Fought the Battle of Jerico and the Walls Came a Tumbling Down.” A loud crash came from the basement, and it was discovered that a large piece of plaster had fallen.
Those elementary kids were believers after that.
Special Music for the Evening …
… was given by the young Sunday School kids, “The Gospelettes”  (Emmalee  Smith, Madilynn Miller, Alivia Claycomb, Cordelia Lytle and Khloe Enlow), and also “The Gospel  Tones,” a teenage singing group from the late 1970s. Eight of the original 13 were able to come back – Paula Koester Ignat, Karen Koester Torbeck, Debra Rook Philpot, Lynn Schaub Boggs, Robin  Goldsborough Lovett, Melinda Garrison Winters, Cathy Underwood Smith and Karen Underwood.
A video of pictures of history of the early days of the church in the 1870s to the present was prepared by Jamie Smith and Toby Tackett. To top off the evening, a puppet show, using puppets from years ago was presented. Puppeteers were William Lytle, Walt Kinney, Samuel Miller, Matthew Smith, Tiffany Hipsher, Ashton Smith and Travis Gould.
Children were thrilled as balls were thrown into the audience, with the message of the show, “When we work together as a team, here is the result.” A photo of the new building was then shown on the screen.
Sherry Meador, in a fun way, then presented to Tandy Mason (who had the old building) the key to the building.
A display of old photos and wedding photo of people who were married in the old building had been set up, and many relived past days looking at them.
Sherry Meador planned the program, along with husband, Chris, and they had many helpers to accomplish those plans. The evening ended with the singing of “Precious Memories” and prayer, led by Nathan Brands.
Dedication of the New Building
On Sunday morning, following the worship service, the congregation gathered outside on the front steps, where Ron Gould took photos.
The members of the congregation then went to the new building, entered and formed a prayer circle around the fellowship hall, where prayers were offered by the elders and minister for the dedication of the new building to the service of God and to His glory.
People then went through the building to view it. Felt markers were handed out for individuals to write Scriptures, messages or names on unfinished portions that will either be painted over or have drywall covering it.
Many of the youth wrote on the floor of the room that will be their meeting place.
It was a great weekend of celebration and memories, but most of all, excitement for the future and leaning on God for direction, help and blessing. 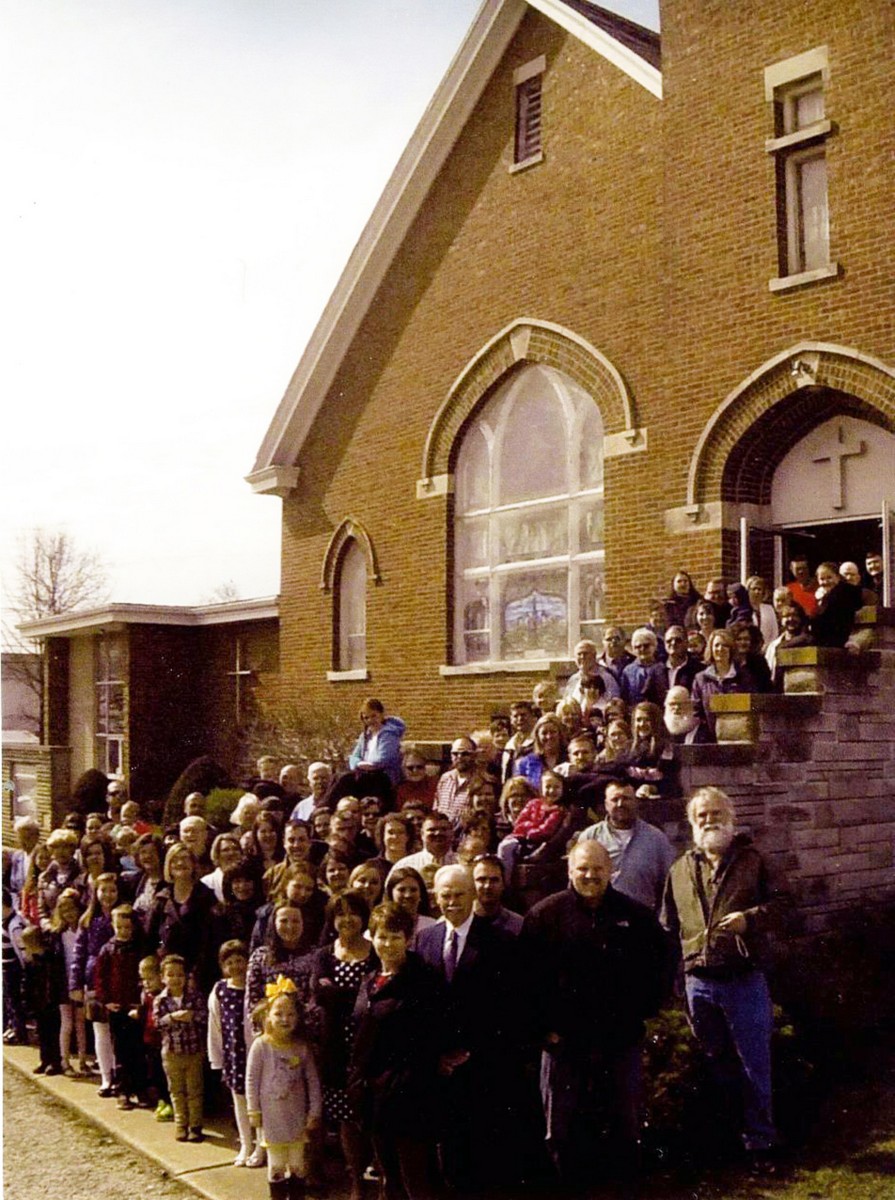 The congregation of First Christian Church stands outside their former church home after the last service there.