The owner of a former downtown Vandalia restaurant is back downtown, with a new restaurant bearing a new name and at a new location.

Amy Gaffney, who for several years operated Copper Penny on South Fourth Street, is now the owner of Blind Society.
Gaffney’s new restaurant is located in the Witness Distillery building, the longtime home of Allen Furniture, at the southeast corner of Fourth and Gallatin streets.
“I love the restaurant business,” Gaffney said.
“I didn’t get out of the restaurant business because I wanted to or because I wasn’t successful,” she said, explaining that she got out because of circumstances beyond her control.
After Copper Penny closed, Gaffney went to work for a food distributor in downtown St. Louis.
Then, in December 2016, Mike Radliff, president of First National Bank “asked me to stop by the bank.
"We met that night, and he told me that night at dinner the reason he wanted to meet with me.”
Mike Radliff is the cousin of Rick Radliff, who is in the process with his wife, Cindy, of creating Witness Distillery in the former home of the furniture business.
The Radliffs’ proposition to Gaffney was to open a restaurant adjacent to the distillery, which has a view of the Vandalia Statehouse.
Gaffney jumped at the chance, not only because she could get back in the restaurant business, but also because, “I got to do it from scratch. Before, I had to deal with what I had.
“My kitchen is about five times as big as the one at Copper Penny,” she said. “That’s so exciting.”
What she did from scratch was created a two-section dining establishment that includes a bar area.
“I’ve tried to bring a city feel, a more modern feel to Vandalia, kind of like what is in St. Charles (Mo.),” Gaffney said.
Some of the things on Blind Society’s menu will be familiar to those who frequented Copper Penny, but many will not.
“The menu is somewhat similar,” Gaffney said in explaining that her menu now includes such things as steaks, seafood and briskets.
The appetizers are also similar, but such the menu now includes such things as brisket nachos and brisket tacos.
“We make all of our own breadings, dressings, sauces, etc. Everything is handmade,” Gaffney said.
The bar in Blind Society will also “have a lot of new drinks,” she said.
Gaffney said that she has always been a little hesitant about adding new drinks, wondering how they would go over.
“It’s something that I always wanted to do, so I went with it and just crossed my fingers,” she said.
“It’s going over great,” she said. “We have drinks that are different than what anybody else has in this town.
“Some of them I made up myself, and some I took from customers, who gave me their recipes,” Gaffney said.
Those contributions help to show how Blind Society is being received.
“My customers are super supportive,” she said.
Blind Society is currently open from 11 a.m.-11 p.m., Tuesday through Wednesday and 11 a.m.-midnight on Friday and Saturday, with plans to open on Sundays down the road. Food is served until 9 p.m.
Blind Society is closed on Mondays. 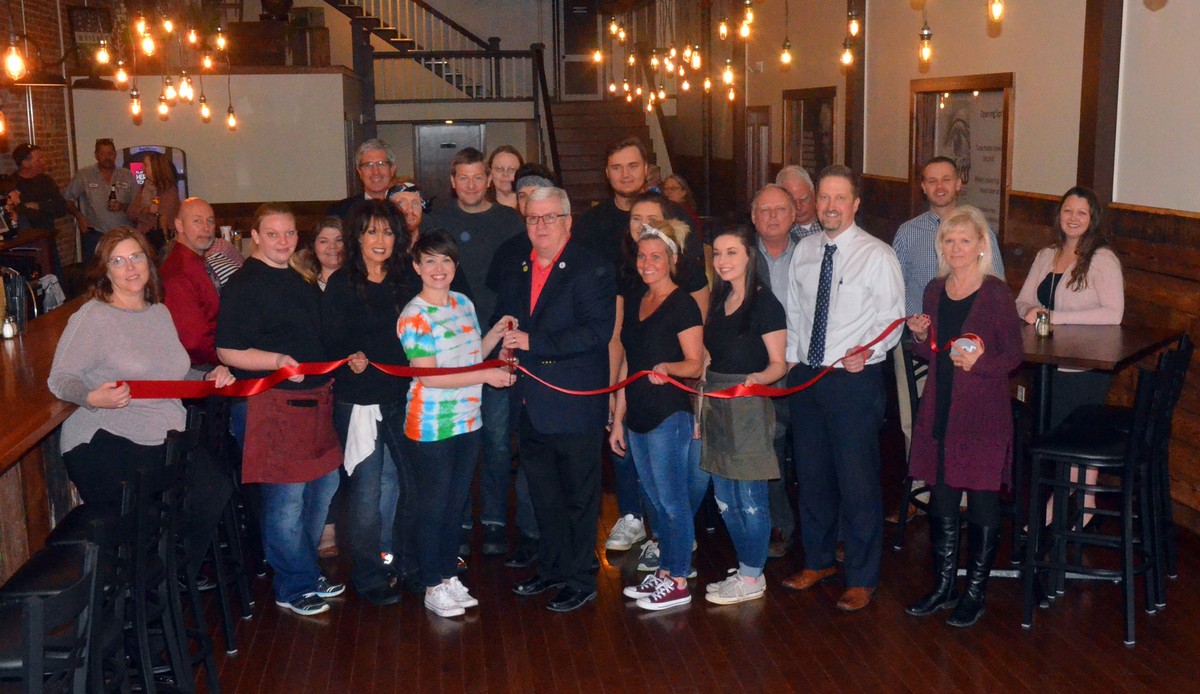 The Greater Fayette County Chamber of Commerce recently held a ribbon-cutting ceremony and Business After Hours at Blind Society, which is located at 303 W. Gallatin St., adjacent to Witness Distillery in the former home of Allen Furniture. Above, Blind Society owner Amy Gaffney and Vandalia Mayor Rick Gottman cut the ribbon.