Back in 1928, 19 Vandalia men got together to form a local arm of an young international service club.

Monday night, Lions Club members from throughout the region joined local members in celebrating the Vandalia Lions Club’s 90th anniversary.
Nine years after Chicago businessman Melvin Jones founded the Lions Club, the group of Vandalia men joined the club, which is now a network of clubs in more than 200 countries and geographical areas.
“As Lions, we know that in 1917, our association was founded,” Lions District 1L Gov. Lori Bennett told members.
“We know that in 1925, Helen Keller challenged the Lions to be the knights of the blind. We know that in 1928, not only was the Vandalia Lions Club chartered, but the first service organization was chartered in China,” she said.
“In 1930, the Peoria Lions Club started the white cane (sight) campaign,” she said.
“Our association has always recognized the need for change, to meet the needs of the people we serve,” Bennett said. “The Vandalia Lions Club, looking through those slides, is no different.”
The slides that Bennett mentioned were part of a presentation that club members Jerry Schukar and John Dotray prepared that included numerous old photographs representing various club projects over the years, as well as many of the club’s members in earlier years.
Also during the anniversary celebration at America’s Best Value Inn, Bennett installed three new members of the local club – Jess Jackson, Cheryl Dotray and Holly Smith, who were sponsored by John Dotray and Les Smith, the club’s current president who served as emcee for Monday’s celebration.
“You’re making changes even today,” Bennett said. “You have three new members.
“But, if you think about it, they’re not a whole lot different than those original Lions. Your new members already understand, like Melvin Jones did, that you’re not going to get very far in this life unless you do something for someone else,” she said.
“Your new members already know, just like Helen Keller did, that alone we can do so little, together we can do so much,” Bennett said.
“Your new Lions already know that it’s not just enough to see a need, like the Peoria Lions did, you really have to do something about it.
“They already know ‘We Serve,’ Bennett said, mentioning the Lions Club motto.
“These new members are not so different from your charter members back in 1928 – they’re ready to change their world, one life at a time. And they’re not so different from you when you first joined – they wanted to put a smile on someone else’s face and make their life a little bit easier,” she said.
“They will see change, even if it’s one person at a time,” Bennett said. “They will see opportunities to put smiles on someone else’s face.”
The celebration closed with Dale “Pete” Burnam leading those present in the singing of “God Bless America.”
Burnam has been a member of the Vandalia Lions Club for 51 years, and he remembers joining the service organization.
“A man, Albright, who had a clothing store, came to me and said, “We would like to have you as a Lions Club member,” said Burnam, who in 1966 came to Vandalia to serve as the chief executive officer of Fayette Service.
“I said, ‘I don’t know what the Lions Club is.’ He said, ‘Will you come to our meeting?’” Burnam said.
He joined the Vandalia Lions Club, at a time when it was more difficult to do so. “After 30 days, he came to me to tell me that I had been accepted.”
“It wasn’t easy to get in, because there were a whole lot of people who asked to be Lions, and they never would take them,” Burnam said.
He said that what attracted him to a Lions Club membership was its commitment to “helping people. The Lions do so many things for so many people,” Burnam said.
One example is the Lions’ work to aid sight-impaired individuals.
“I’m a collector for the club of eyeglasses to help children.
“We will send out probably at least 3,000 (eyeglasses) every two or three months. They are reworked and then they go to people who need them,” Burnam said. 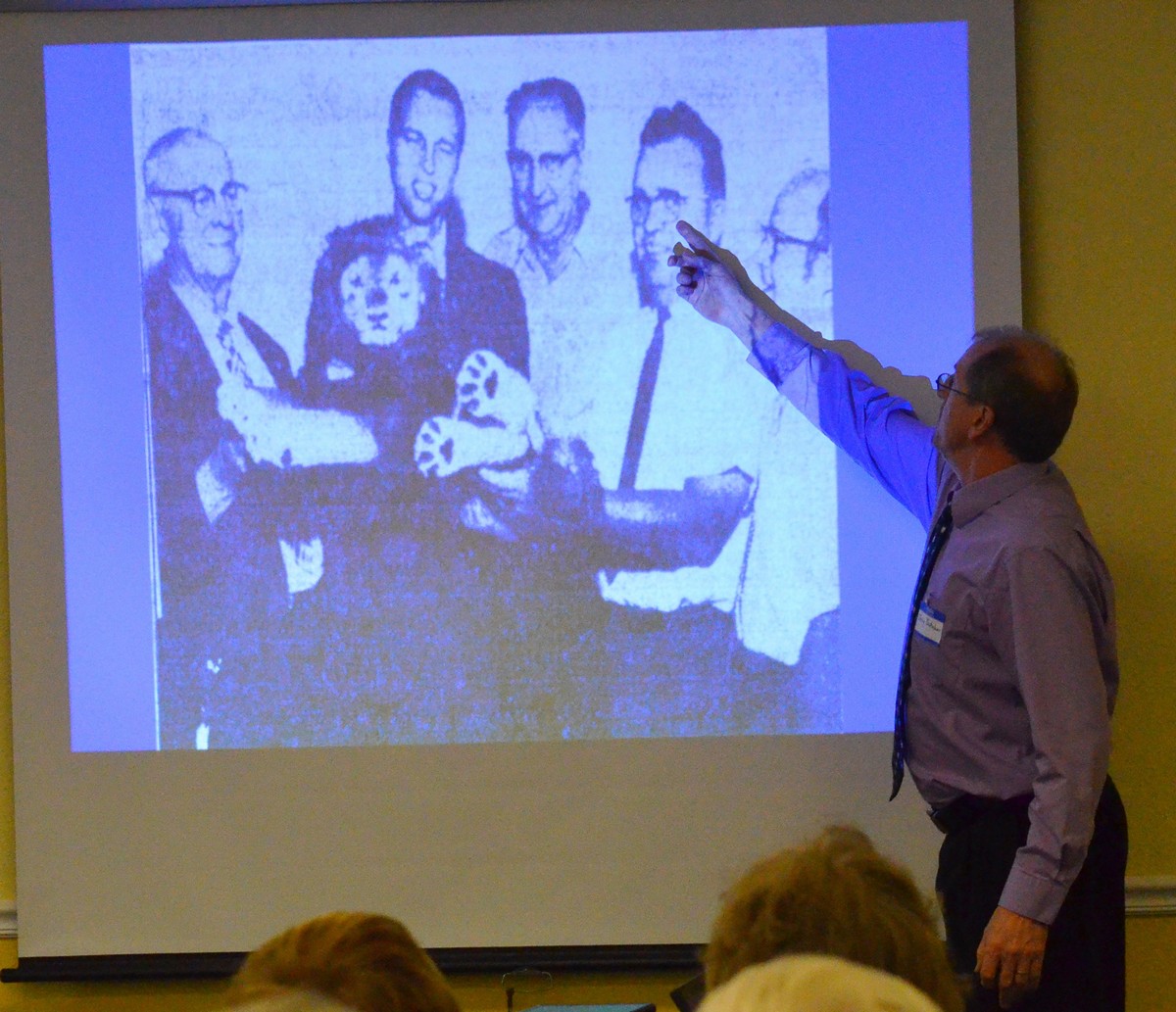 Vandalia Lions Club member Jerry Schukar identifies members of the club in a photo that was part of a slide presentation during the club’s anniversary celebration. Schukar and fellow Lion John Dotray put together the presentation. ‘Pete’ Burnam, who has been a member of the Vandalia Lions Club since 1966, leads everyone in the singing of ‘God Bless America’ at the conclusion of Monday’s 90th anniversary celebration. 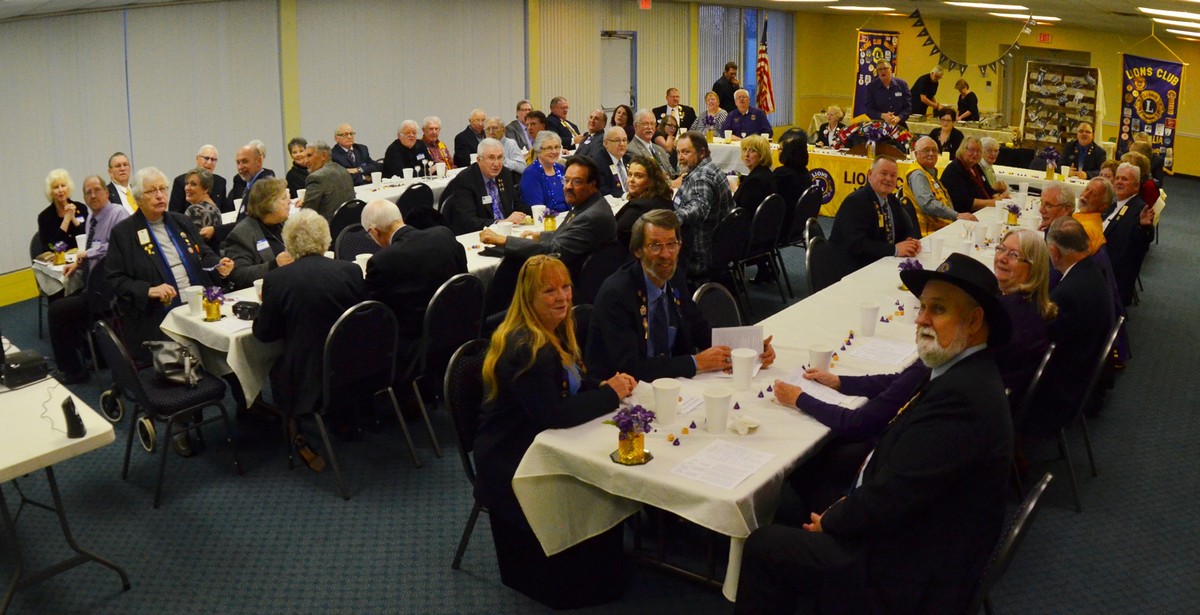 The local and regional members of the Lions Club who attended the celebration of the Vandalia Lions Club’s 90th anniversary are pictured above. 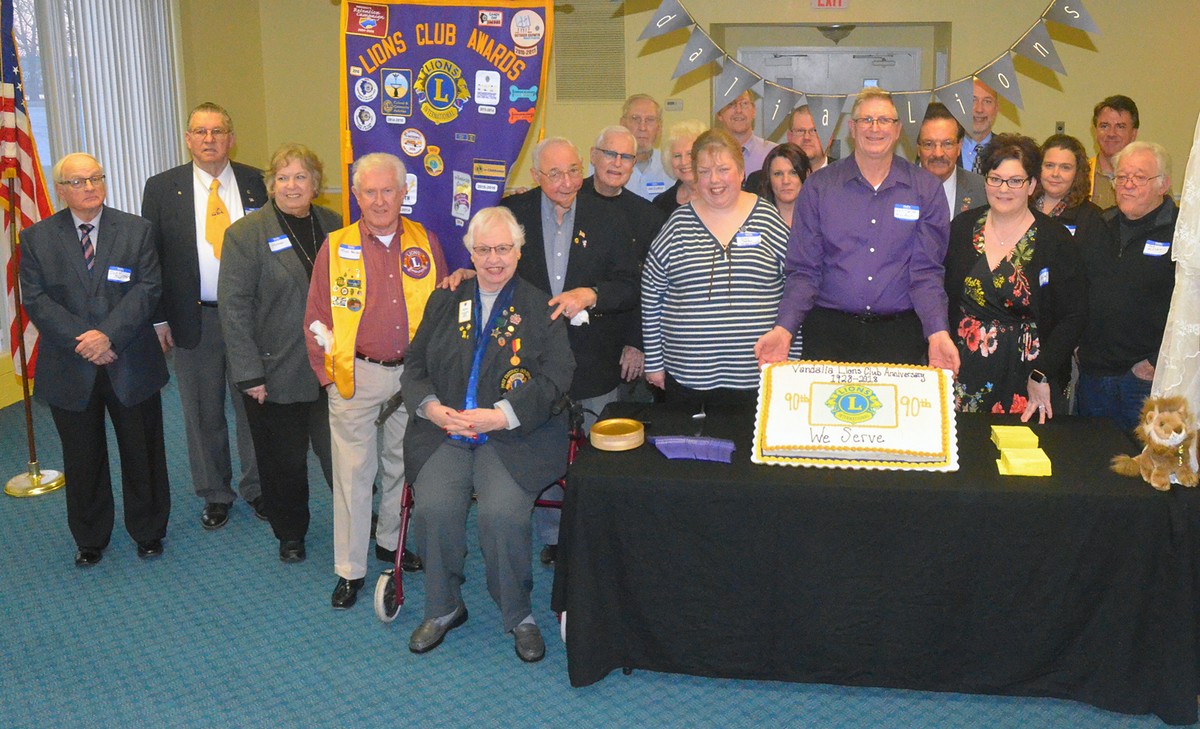 Current and past members of the Vandalia Lions Club who were present for Monday’s celebration of the club’s 90th anniversary are pictured with a cake made for the celebration.