Anthony Enlow took the third-place medal at 285 pounds, Garret Stewart placed fifth at 182 pounds, and Jarek Wehrle and Tanner Swain placed sixth at 106 and 126, respectively.
The two others Vandalia wrestlers competing at state, Dakota Gasaway, at 113, and Jarrett Paslay, at 138, were eliminated in the first round.
“It’s great – four places … after none last year,” Vandals coach Jason Clay said.
“Obviously, some of the matches were tough, but when you get to this point of the tournament, there are a lot of tough matches.
“Anthony coming through and getting third, sometimes heavyweight is about positioning and not making mistakes. “Sometimes it’s tough to score points, and you’ve got to do what you can to score points,” Clay said about the one point Enlow scored on an escape in the third-place match.
“One thing that’s good about Anthony is that he is able to ride well, and a lot of heavyweights have trouble keeping him down. “That’s a skill that he has had even since last year, as a freshman, where he can win some close matches if he’s able to ride them out,” he said about the only Vandalia wrestler to win a Illinois Kids Wrestling Federation championship.
“It’s tough when you re-wrestle a kid that you wrestled earlier, but Anthony was able to get an escape point and be tough on top,” Clay said.
“It was good to see Garret in his last match going out on a win. In the semifinal wrestleback, he made one move going for it and got down a little, but he kept working back.
“I feel like he is improving all of the time, even as a senior, so I’m proud to see him finish off that way,” Clay said.
“Young guys, like Jarek, felt had a really good tournament. He lost three in a row and was disappointed, but looking back, he did a good job.
“He lost several close matches, but he came through and got sixth – that’s nothing to hang your head about. He will just keep learning and getting better,” Clay said.
“Tanner’s (sixth-place) match was a one-takedown match. We’d beaten (Cam) Lee three times, and that was the first time we’d lost to him and it was at state,” he said.
Enlow said he was feeling “pretty good” about his third-place finish.
“Obviously, I didn’t do what I was supposed to come here and do (win first place), but I fought my way back to third.
“I think that third as a sophomore is pretty good, even though I knew that I could have done better.
“I wrestled the kid (Taylor Fleetwood of Fulton) previously in the tournament and when I knew that I would see him again, I watched some film to make sure I knew what I was going to do. Then, I just went out there and wrestled,” Enlow said.
Stewart said he felt that he “wrestled hard” throughout the tournament, and even after falling into wrestlebacks, he remained optimistic.
“I still felt tough and ready to wrestle,” said Stewart, who started out wrestling at 220 last season before cutting down to 195 and then 182.
Since the end of last season, Stewart worked hard to “gain a lot of muscle and lose a lot of fat.
“It’s all about putting in the time,” he said.
Swain was disappointed in his finish, but it gave him something to work for in his senior campaign. “Next year, I will just aim for the top of the podium.
“I felt like I left it all out the map, and I lost 3-2 to the kid who won it (Noah Villarreal of Aurora Christian), so I can’t be too awful mad,” he said.
Wehrle, like Swain, felt that he could have done better and was disappointed with his finish, but was still pleased with his first go-around at the state tournament.
“I’m happy with that,” Wehrle said. “It just gives me something to work for and get better in the future.” 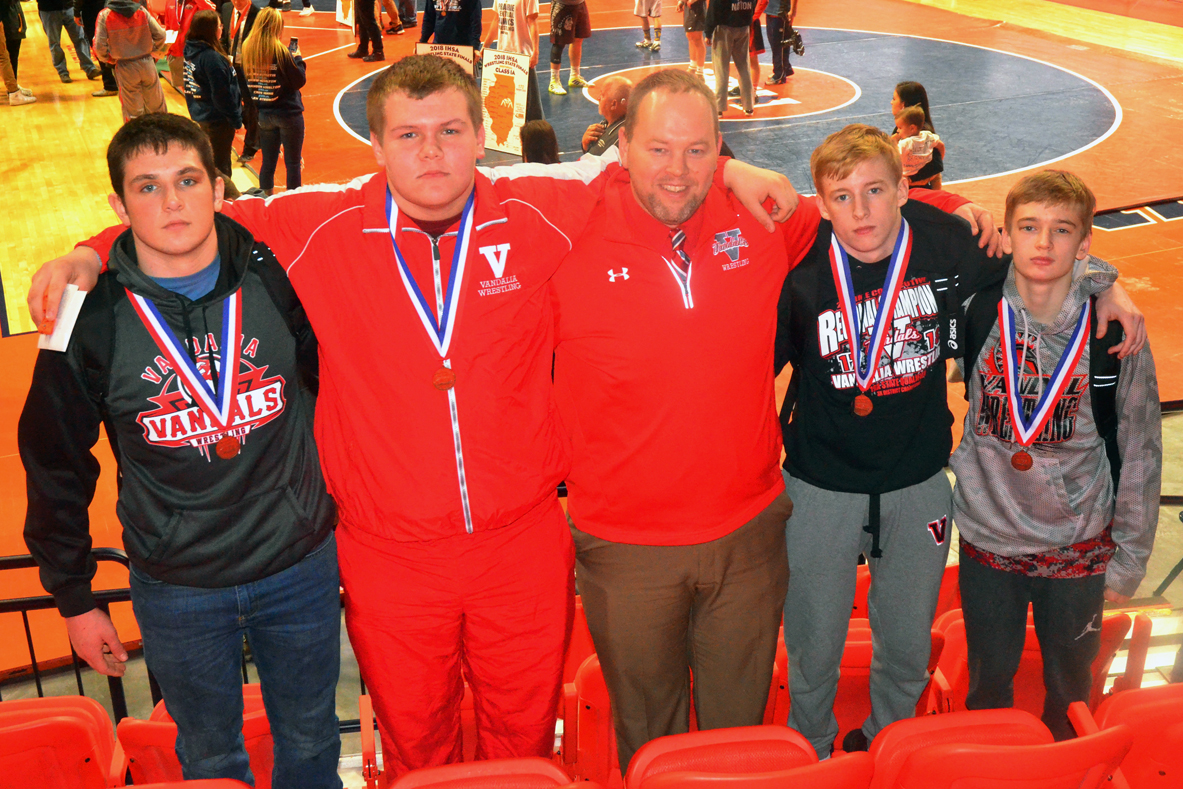 Vandalia wrestling coach Jason Clay is shown with the four Vandals who earned medals at the IHSA Individual State Wrestling Tournament at the State Farm Center in Champaign. From left to right are: Garret Stewart, 182 pounds, fifth plac 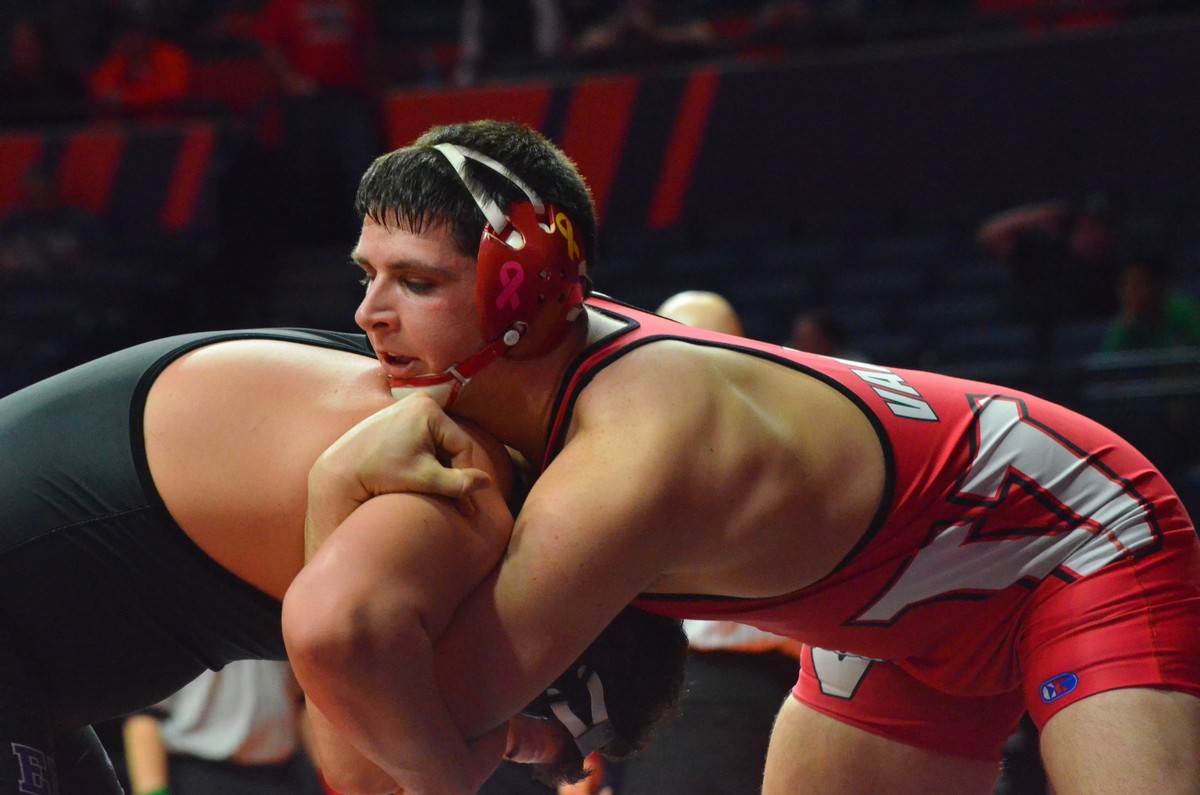 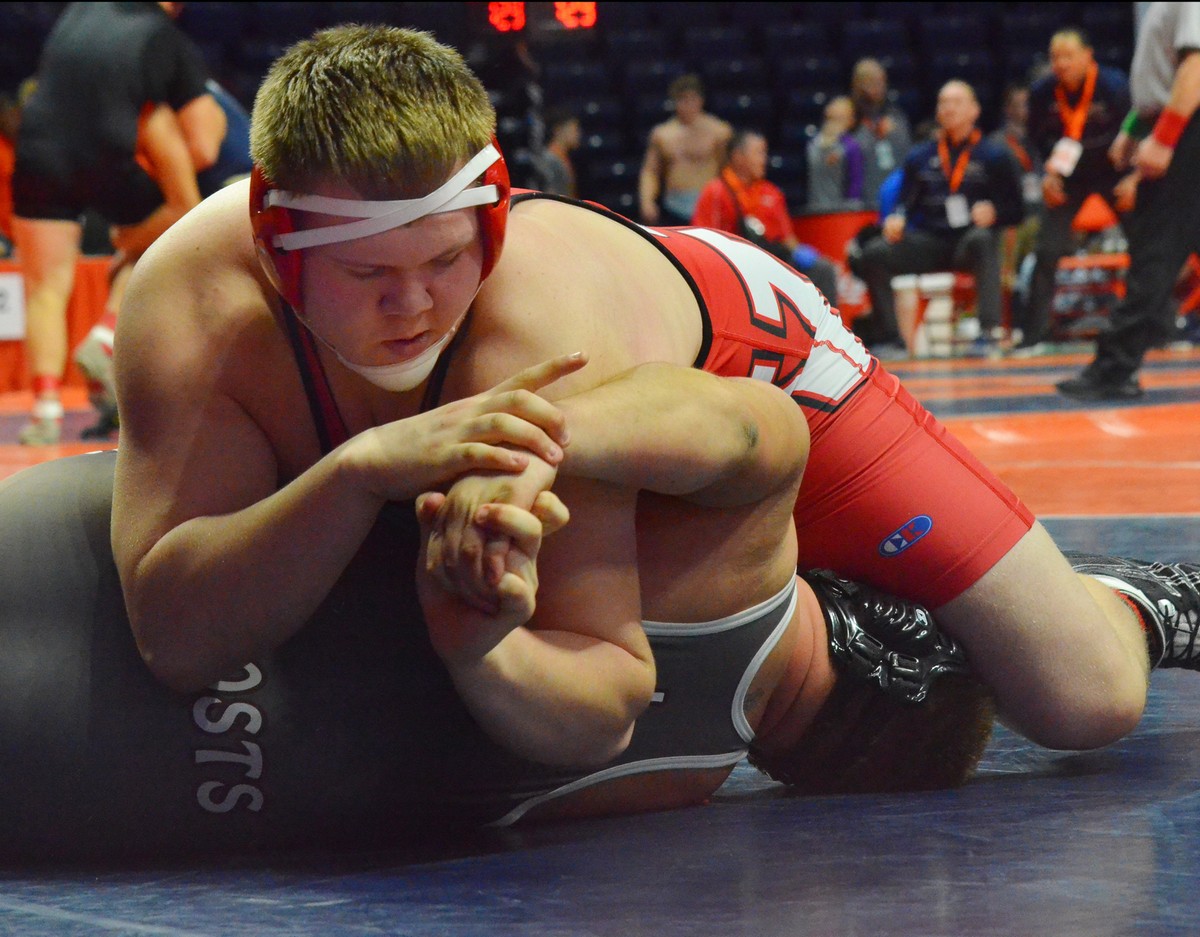 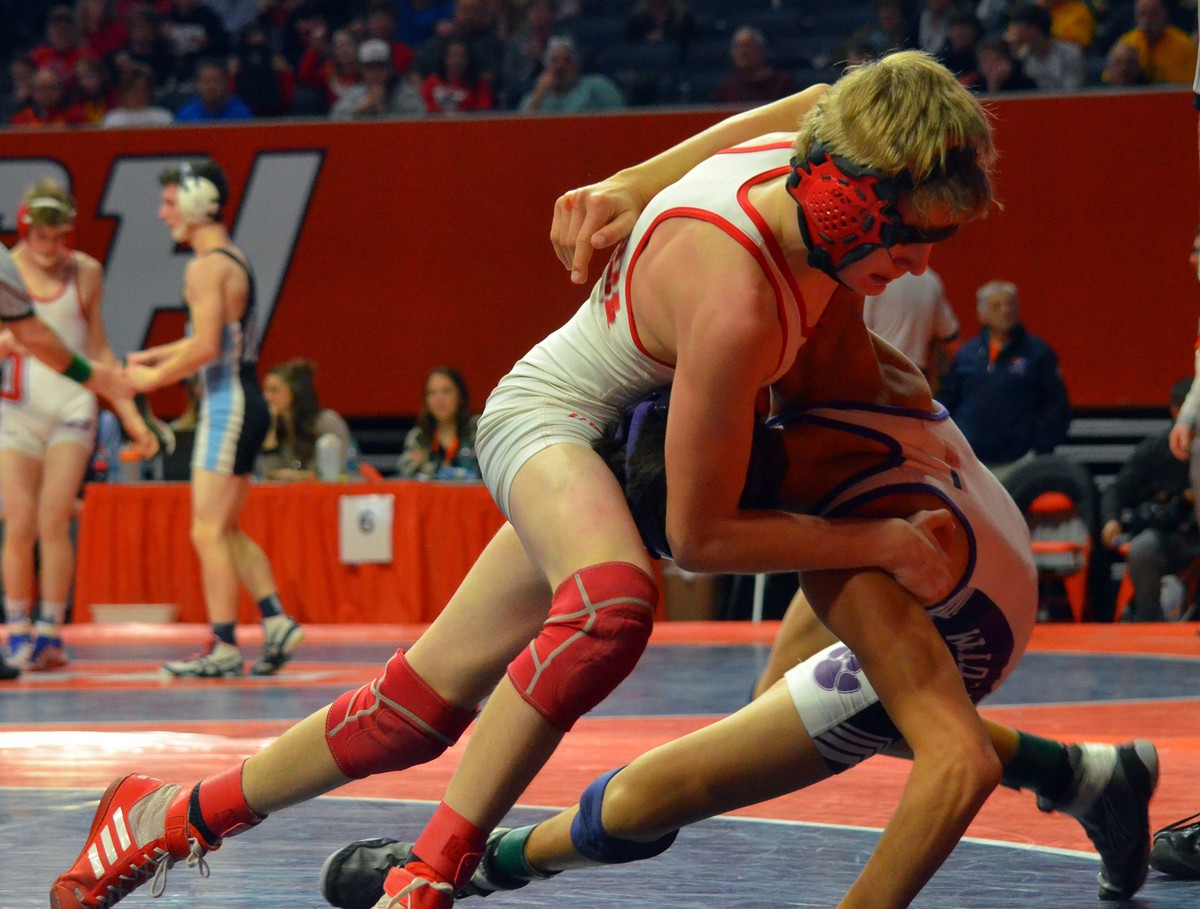 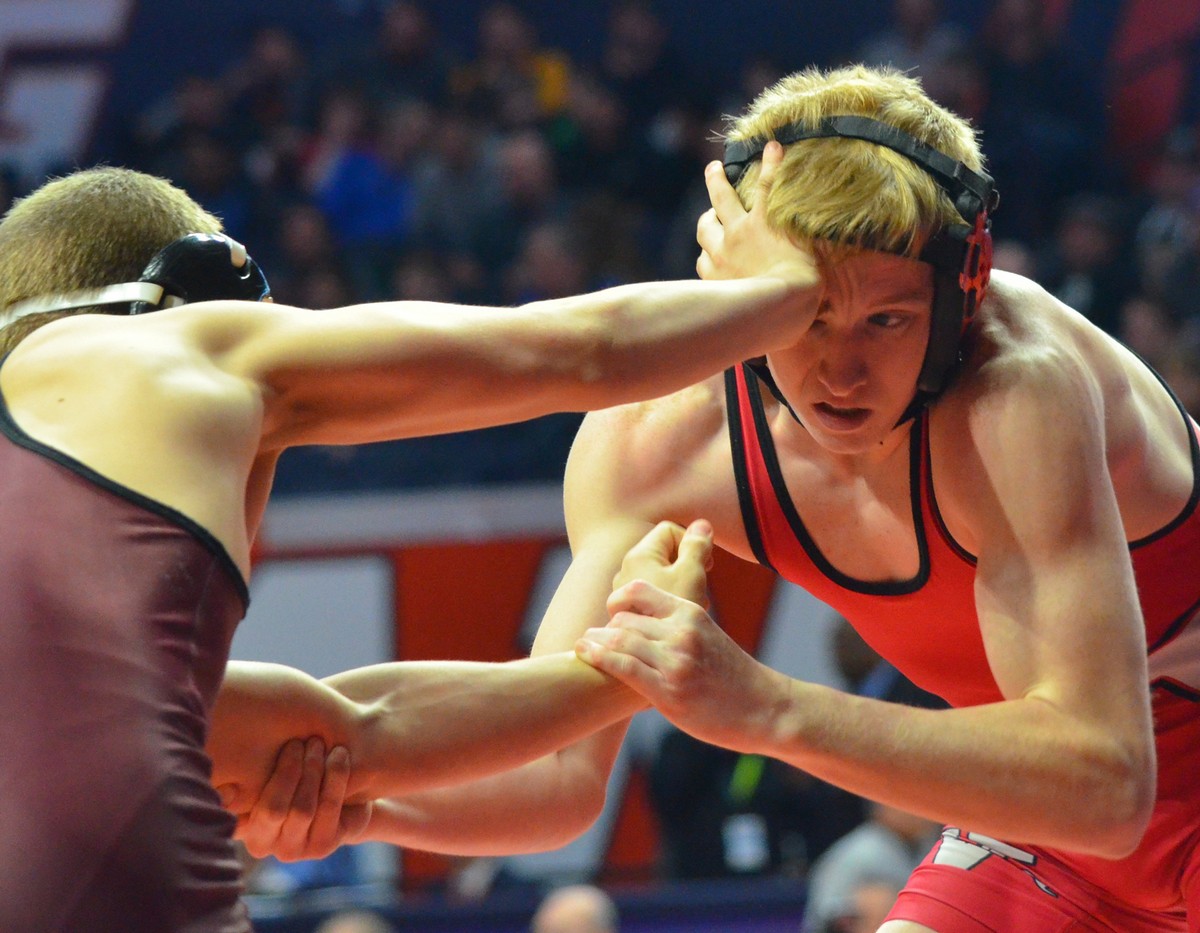