The Fayette County Board on Tuesday offered thanks to the county’s outgoing coroner and then, in a split vote, appointed someone to replace him.

Near the close of Tuesday’s board meeting, board Chairman Jeff Beckman thanked Bruce Bowen and presented him with a plaque noting his 17 years of service as the county’s coroner.
“I appreciate the opportunity to serve,” Bowen said, adding that he tried his best to serve the residents of the county.
Bowen, in turn, honored the three men who have served as his deputies – Rick Gottman, Mike Black and Mark Miller II.
The three men spoke of the quality of service and professionalism that Bowen brought to the office of coroner.
Gottman said that he has met many coroners from throughout the state during his training seminars, and in his assessment, “Bruce is probably one of the top notch coroners in the state.
“He has served this county very well and has taken the office to the professionalism it is today,” said Gottman, who has been a deputy coroner for more than a quarter of a century.
Black and Miller, whose family has been involved in the operations of the coroner’s office since 1952, concurred with Gottman, adding that other agencies have also noted Bowen’s quality of work as coroner.
Bowen, who was elected to a fifth term as coroner last year, announced his resignation last month, stating in a letter to board Chairman Jeff Beckman that he was displeased about being excluded from the county’s new budget preparation process.
After those honors were handed out, board members were asked to approve the appointment of David Hejl as the county coroner through Nov. 30 of next year, at which time the office will be filled through Nov. 30, 2020, by election. Hejl has filed to run in next year’s election.
After motions to approve the appointment were made, board member Bryce Kistler said that knew that Hejl had been working with Bowen and that Bowen “highly recommended” Hejl as his successor.
But, Kistler said, he had learned of a potential conflict of interest regarding the pathologist that would be used during Hejl’s tenure.
Beckman said that he, too, had heard about a possible conflict of interest, and asked Hejil to defend himself.
“I don’t consider it a defense,” Hejl said, explaining that the issue being brought up is the fact that his wife, Dr. Marissa Feeney, is a forensic pathologist and that her serves as her assistant for autopsies for numerous counties, including Fayette, Effingham, Jefferson, Marion and Bond.
Hejl said that the coroner can be a pathologist, but that he or she cannot do his or her own autopsies.
“I serve at the pleasure of the board, and it obviously would be very apparent if the autopsy numbers changed drastically,” he said.
“I’m perfectly fine not serving because of that,” he said.
In response, Kistler said, “In the general election, that will be the people’s vote. Tonight it will be mine.”
Hejl’s appointment was approved in an 8-4 vote, with Beckman, Darrell Schaal, Mark Isaiah, Glenn Gurtner, John Daniels Jr., Jacob Harris, Jenny Waggoner and Glenda Bartels voting for the appointment and Kistler, Dean Bernhardt, Keith Cole and Glen “Whitey” Daniels casting dissenting votes. Chad Austin and Wade Wilhour were not present for the meeting.
Also at Tuesday’s meeting:
• The board approved a new agreement with the Fayette County Health Department for a solid waste coordinator for the county.
Under the agreement, which runs through Nov. 30, 2019, the health department’s solid waste coordinator will expend an average of .15 full-time equivalents of a staff employee and at least .02 full-time equivalents in supervisory time.
The county will pay the health department $1,500 per quarter for the solid waste coordinator services, as well as up to $700 per year for out-of-county travel and meeting expenses.
• The board approved a new, two-year agreement with Heaton-Heistand Veterinarian Hospital for animal control services.
Under the agreement, the county will pay $58,000 per year for the services.
• The board approved a resolution that calls for the county to pay $7 per person and $100 for hall rental for the county employees’ Christmas dinner. 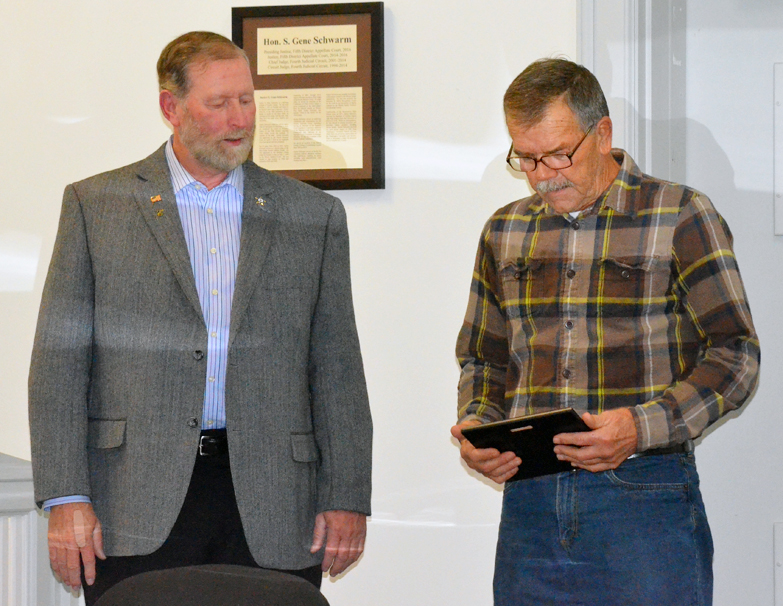 Fayette County Board Chairman Jeff Beckman, right, presents to Bruce Bowen a plaque recognizing him for 17 years of service as county coroner. 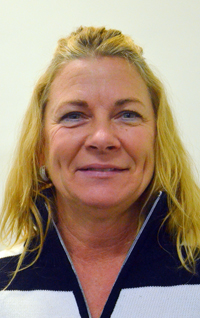 Glenda Bartels attended her first meeting as a county board member on Tuesday. 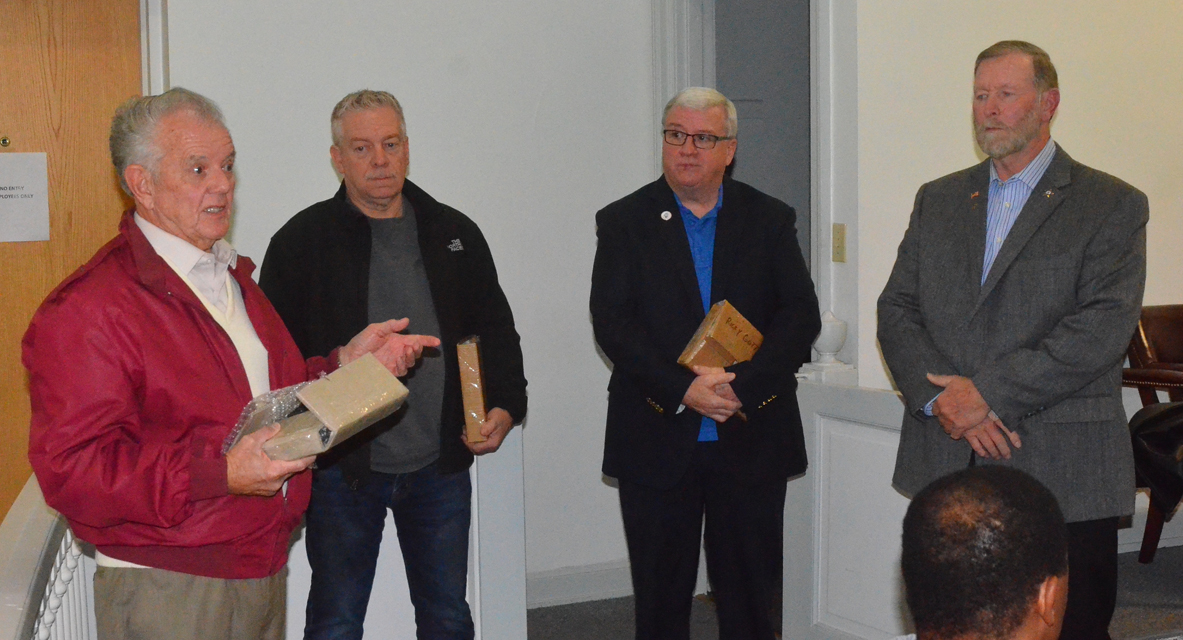