The Vandals may not have set a new single-game scoring record on Friday night, but their cheerleaders likely set a new mark for jumping jacks.

With the Vandals scoring 76 points in their homecoming win over Staunton, they had the VCHS cheerleaders – who perform the team’s total after each score – doing 465 jumping jacks.
With the 76-29 win on Friday, the Vandals were two points short of the school’s single-game mark, but they improved to 5-1, which made them eligible for postseason play this season.
Trevor Smalls scored on runs of 6 yards and 2 yards in the first half, then added touchdowns from 9, 37 and 13 yards in the second half. Two two-point conversions gave him a total of 39 points, and he totaled 297 yards on the ground.
Marcus Zimmerman – on a pass reception and 50-yard interception return – and Dylan Garrett – on a kickoff return and running play, each contributed two scores, and special teams provided two more – a 30-yard return of an interception by Garett McNary and the recovery of a punt (kicked into the back of a Staunton blocker) in the end zone by Chandler Boyd and James Taylor.
Ethan Bayles provided the balance of the scoring with five extra-point kicks.
Vandalia fell behind twice in the first half, 7-0 two minutes into the first quarter and with two minutes left the half, then shutout the Bulldogs while putting 26 points on the board in the third quarter and seven more in the fourth.
Staunton knotted the score at 15 and 22 in the first half. A 67-yard return of a kickoff by Dylan Garrett gave the Vandals lead at 28-22 with 6:25 left in the half.
Staunton scored to go up by one, but Smalls countered with a 54-yard run that gave the Vandals a lead they would hold to for the rest of the game.
Vandals coach Jason Clay said that Staunton’s offensive play in the first half wasn’t surprising, and that defensive adjustments brought that to a halt by halftime.
“They’re vastly improved on offense,” he said. “They’ve got some weapons … they’ve been scoring on people.
“But, they (Vandals’ defense) made some adjustments and got things stopped in the second quarter, adjusted a little more at halftime, and pitched a shutout in the second half,” he said.
“We got some defensive (points), some special team (points), and you pile on the points when you do that,” Clay said.
The defensive adjustments were mainly changes in pass coverage. “We were mixing coverages on man and zone, tried a couple of different techniques.
“We’re having trouble getting heat on the quarterback, not getting enough pressure on him, so we’re having to play pass defense longer,” he said.
“We’ve just got to keep working on it, we’ve got to get better at it,” Clay said.
While the defense was making adjustments, the offense was simply giving the ball to Smalls.
“Trevor is a pretty special back, he’s powerful Clay said. “And our offensive line, obviously, was doing a good job.
“Garett McNary was lead blocking a lot,” he said. “We kind of brought out that formation that we hadn’t used a lot this year, just straight-up, old-school football.
“Just smash it up in there,” he said. “With Trevor, I’ll take my chances.
“Our perimeter people also did a good job blocking. We didn’t throw the ball a whole lot, but when you’re running the football like that, you don’t need to,” Clay said.
“I’m proud of our receivers for blocking, too,” he said. With all of those offensive players blocking, he said, “that’s how you get touchdowns instead of big plays.”
The Vandals have Carlinville (6-0), Roxana and Pana (5-1) left on the schedule, with the first and third opponents being among the toughest they will face all year.
“Obviously, we control our own destiny, as far as the conference goes,” Clay said.
“Those (Carlinville and Pana) should be good games, (and) you want to be playing good games at the end of the year, because you test yourself and find out where you are,” he said.
Offense
Rushing – 38 carries for 388 yards; Smalls 22/297, 5 touchdowns; Wells 8/17; Ferguson 1/11; McNary 3/26; Garrett 2/29, touchdown; Largent 1/5; K. Phillips 1/1.
Passing – Wells 5 for 7, 89 yards, touchdown.
Receiving – Zimmerman 3/77, touchdown; Ferguson 1/2; McNary 1/10.
Defense – Zimmerman 6 solo/1 tackle for loss, interception (touchdown); Ritchey 2/2 assisted; C. Phillips 2 solo; Taylor 1/2, fumble recovery; Smock 4/1, 2 tackles for loss; Boyd 4/3, 2 tackles for loss, fumble recovery; Garrett 5/1; Stanley 2/1; McNary 5/1, interception (touchdown); Smalls 4 solo; Ulmer 4/1, 1 tackle for loss; Kaiser 1/1, 1 tackle for loss; Lott 2 solo; Plunkett 1 solo; Bayles 1 solo; Largent 1/1; Lotz 1 solo; Cox 1 assisted. 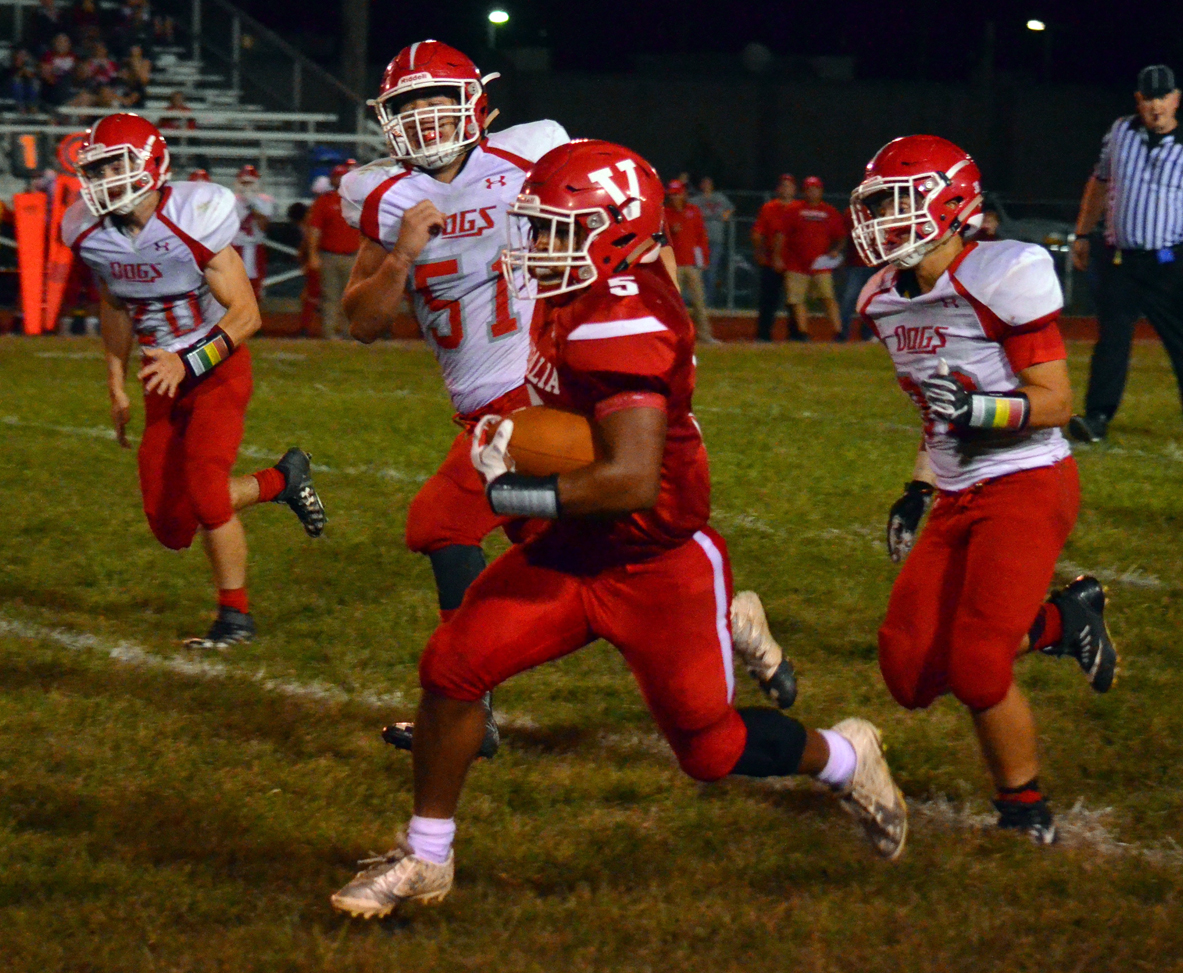 Trevor Smalls outruns three Staunton defenders on one of his five touchdown runs on Friday night. 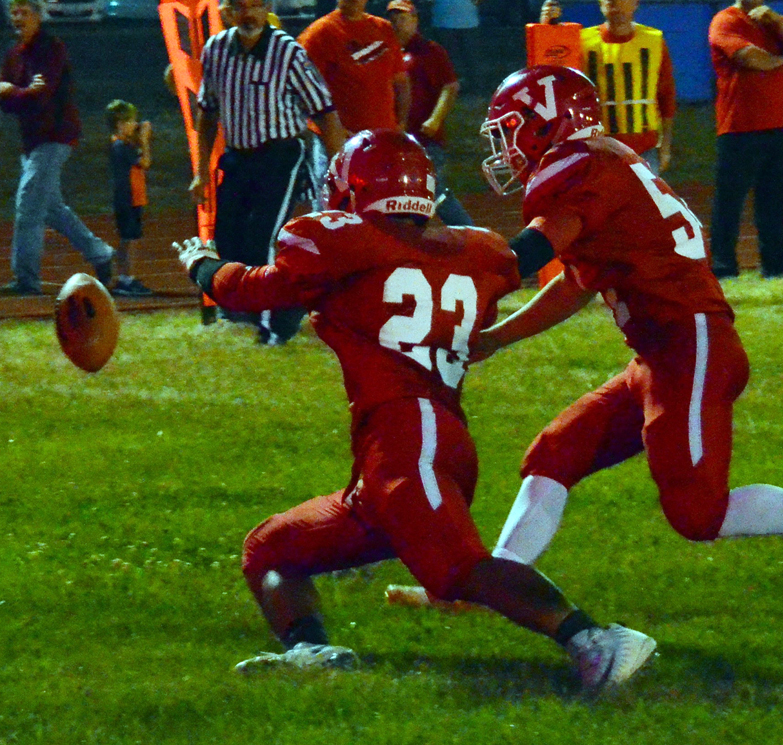 Vandalia’s J.T. Taylor (23) and Chandler Boyd dive to recover in the end zone a Staunton punt attempt that hit a Bulldog blocker in the back.