State Rep. John Cavaletto (R-Salem) announced on Monday that he will not seek re-election in the upcoming November 2018 election.

The five-term Republican legislator is a retired educator and Illinois High School Association Athletic Directors Hall of Fame member. He was first sworn in as 107th District State Representative in January 2009.
“I have been honored to serve the people of southern Illinois during this trying time in our state’s history,” Cavaletto said. “I’ve spent my time in Springfield fighting for conservative values. I’ve been a consistent supporter of pro-life issues and I’ve worked hard to defend our Second Amendment rights. Conservative principles are constantly under attack in Springfield and I am very proud of my record of standing up for southern Illinois values.”
Cavaletto said he first campaigned on the need for job growth and economic development. He argues some progress has been made, but more must be done to develop our natural resources and other opportunities in Southern Illinois.
“I come from a family of Southern Illinois coal miners,” Cavaletto said.
“I’ve always said we have to do more to grow jobs for our people down here, especially when it comes to coal. From the very first time I ran, in 2002, all the way up to now, I’ve said we need more good paying jobs in southern Illinois so our kids can raise their families here when they finish their education. Otherwise, we’ll never grow.”
Cavaletto was raised in Sesser. He and his wife, Connie, were high school sweethearts, and they worked together at summer camps for children with disabilities both at Giant City State Park and Little Grassy Lake Campground.
He earned his bachelor’s and master’s degrees from SIU and spent 38 years as a teacher, coach and principal at Breese Mater Dei and Salem Community High School, where he retired in 2001.
As state representative, he served four years on the House Elementary and Secondary Education Committee. He was also a prior member of the Agriculture and Conservation Committee and earned the Illinois Farm Bureau’s “Friend of Agriculture” award in his first four terms in office.
Cavaletto currently serves on the House Fire and Emergency Services Committee and was previously named “Legislator of the Year” by the Illinois Association of Fire Protection Districts.
“My time in the Illinois House has been a humbling and rewarding experience,” Cavaletto said.
“Two of the laws that I’m proud of are the one to reduce the number of days from 18 down to 9 to trigger the truancy process to try to save kids from flunking out of school and the legislation to allow IDES to cross check unemployment recipients to cut back on the fraud from people in prison and out of state.
“At the end of my term, I hope to spend more time at home with my wife and my family, and stay involved with the Route 50 Coalition to upgrade the transportation in our area for economic growth. I want to say a very sincere ‘thank you’ to the people of southern Illinois for the trust and faith they have placed in me during my years as their state representative.” 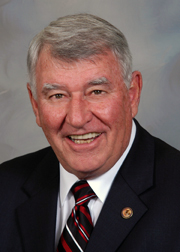