Local farmers looked over the crops at the research center south of Brownstown last week, though it was a different group of people who planted those crops this year.

That research center is now under the ownership of Fayette County Farm Bureau, which is providing crop and chemical research through a partnership with Kaskaskia College’s agriculture department.
And representatives of both parties have a good feeling about both the first year of that partnership and what it can provide in the future.
The Farm Bureau held its annual steak dinner to announce the results of its crop survey at its research center, and while a little less than a third of the crowd of 110 was made up of KC staff members and students, the balance was still about double the attendance of dinners in previous years.
“A lot of people wanted to know what’s going on out here,” Ken Cripe, president of the Fayette County Farm Bureau said.
Having the dinner at the research center helped to clear up some misconceptions, according to Farm Bureau Manager Stephanie Kraus.
“A lot of people thought it was being rented out,” Kraus said. “We wanted to be able to have this continue as a research center, and it seems to be working out really well.
“This is a great opportunity for the kids, and it’s also great for the local farmers in that it’s being used for research that they can use,” she said.
Cripe’s assessment for the first year is: “I think it looks like this is a really good deal, for both the students at Kaskaskia College and for our local farmers.”
Another key partner in the operation of the center is South Central FS, which donated the seed and chemical that was used for more than 80 trials this growing season.
Even though the growing season was reduced this year, due to the fact that the Farm Bureau regained ownership of the land from the University of Illinois in late April and the crops planted in June, those involved believe that the first year was a good one for the center.
“For the limited amount of time we had, I think it worked out really well,” Vince Ochs, South Central western business manager for Bond, Fayette and Montgomery counties, said.
“We did different populations of corn and soybeans, and the (KC) kids did a stand count, to learn what actually came out of the ground,” Ochs said.
“We also did a mode of action trial with herbicides, and it was good for the kids to see what herbicides work well for weeds,” he said.
“The good thing was, we didn’t cut any corners,” he said. “Those are some good, clean fields.”
Maybe the person most thrilled about the new partnership is Bill Johnson of the KC agriculture program.
The timing was good for Johnson, who teaches a crop scouting class in the summer.
“The opportunity for the students here is just phenomenal,” Johnson said, “because you can only teach them so much out of a book. This gives them visual – this is going to work, this isn’t going to work.
“This is learning by doing,” Johnson said.
Before, the ag department at KC was using 15 acres on campus.
“Our research was basically feeding deer,” he said, talking about the limited amount of land the ag students had to work with.
“We tried our best,” he said.
“We still use that – it’s quick, it’s on campus.
“When we come out here, they really get to see, we’re learning in the classroom, this is what’s really happening,” Johnson said.
Had the KC agriculture department gotten this opportunity, the program would have continue on just as it has in the past.
“We’re limited on resources, so we’re blessed to have this opportunity and to have the U of I leave some of the pieces here that match up to what we’re doing,” Johnson said.
When the U of I discontinued research at the Brownstown site, Johnson said, “it’s like closing a school in a community.
“It was not, what are we going to do, but what type of research came off of it,” he said.
“So, that’s where you get community support. One call to Vince (Ochs) and he says, ‘We’ll help you out.’ Because they want this to go, too, and they’re using it as a training site.”
“They’re going to learn the ropes,” Johnson said about the benefit to the students.
About 60 percent of the KC ag students “come from the farm, the rest don’t really have that much background in agriculture.”
Those are the ones, he said, who end up working for agriculture-related companies. “They can tell them, ‘I know how to do a stand count, I know how to look for diseases, I know how to crop scout. And that’s what those companies look for.”
In addition to helping the current students, Johnson said he sees the partnership as being something that can be used to help recruit students.
“I think once when we get going with this, I think we could have, just like Belleville has, just like SIU has, things to bring students in, to get them more interested in the agricultural side of things,” Johnson said.
“This is something that is student-based. Obviously, we here to supervise, but it’s interesting to see them, because they say, ‘What would happen if we tried some fungicide? What if we did some population trials?
“They really helped draw this out here,” Johnson said.
“A lot of the ideas out here came from them.” 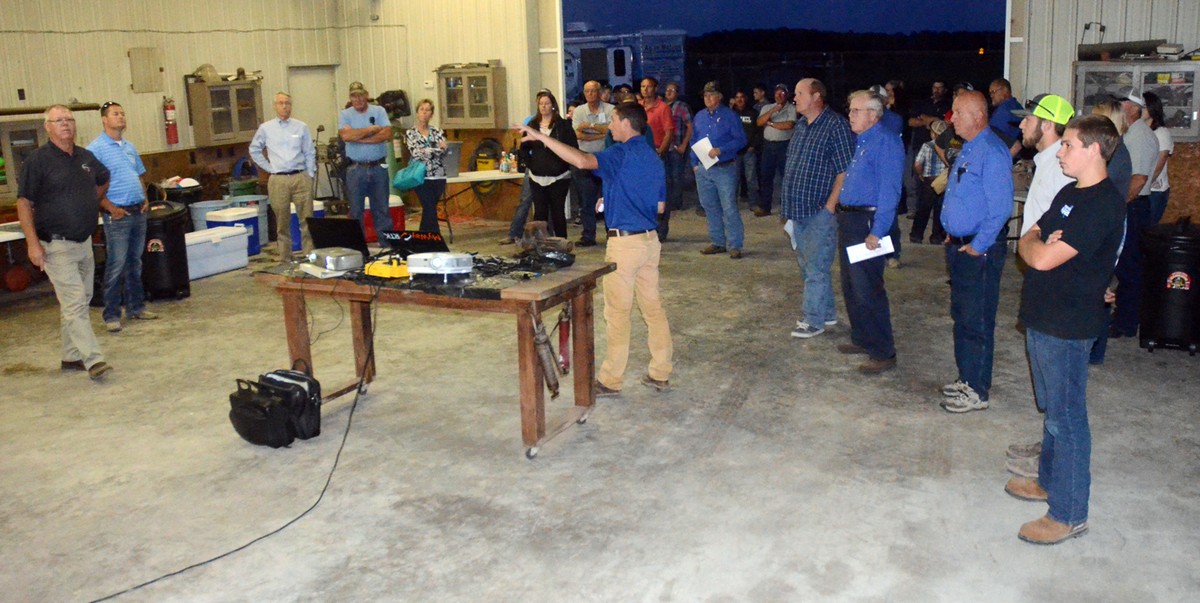 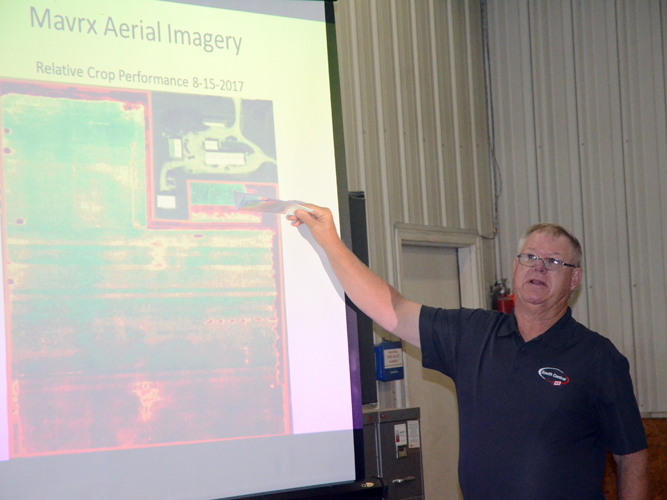 Vince Ochs of South Central explains some of the research done this year at the center.