Melvin and Sherry Hill described their son, Tim, as a good, but adventurous young boy.

“He loved to climb on things,” Sherry said. “One time, when he was going to feed his chickens, he jumped over the fence instead of opening the gate, fell and broke both of his arms. He was a good boy, just a daredevil,” she said.
“When he was 15, he broke a his leg, playing ball,” his father added, but both parents shared these episodes laughingly and affectionally, and their pride in their son was evident as co-workers, both past and present, and employer shared their feelings and appreciation for Tim during a celebration held at Rural King in Vandalia, where he serves as assistant manager.
Growing With Rural King
The celebration was in held on Friday, July 21, by the Rural King Farm & Family Co. in recognition of Hill’s 30 years of service. Planned as a surprise for Tim, the associates’ break room in the Vandalia store was decorated with a table holding a display of Tim’s photos as a baby and on through the years, newspaper clippings of important events in his life, decorative congratulatory balloons and a large decorated cake.
Present were store Manager John Beck; and Rural King cooperate members Susan Samuelson, vice president of operations, and Brian Hutchins, vice president of business development; Tim’s wife, Melissa, and Casey; and Tim’s parents.
Several current employees were also present, along with some past employees.
Beck greeted Tim as he entered the room and commented on Tim’s beginning as an employee of the Rural King store in Vandalia 30 years ago, just after he had graduated from high school.
Beck explained that at the time, the store was hiring high school boys on a part-time basis, two days a week. Beck and his wife, Rhonda, were also teaching at a Christian school, and Tim was one of their pupils,
After Tim graduated, he was hired to work part-time. As he grew in stature and became familiar with the store – the items stocked, and the company’s policies, integrity and values, he also grew in responsibility, willingness to work and an interest in the store.
He progressed up to full-time employment, working in every aisle and department, unloading the trucks of supplies when they came in, and helping stock the supplies and shipments.
Long-time employees who were working at Rural King when Tim was hired shared memories of Tim.
Paul Hinrichs said, “I was coming back from lunch one day and as I pulled into the parking lot, I saw a man run out of the store, and Tim came running as fast as he could, but the guy got away. We had a lot of good times, though.”
Anita Smith, another long-time employee was also working at the store when Tim was hired. “I remember that he was shy, not very outgoing,” she said.
She went on to tell how he learned to set up displays, and was complimentary about his work and working with him.
Another past employee said that many times, she would see Tim working right alongside the younger male employees, putting tires up on the racks, which was a difficult and hot job.
Samuelson presented Hill with a certificate recognizing his 30 years with Rural King, and thanked him for representing so well the values of the Rural King Co. Hutchison also offered his congratulations and photographed the occasion. The company presented his wife with a floral bouquet. 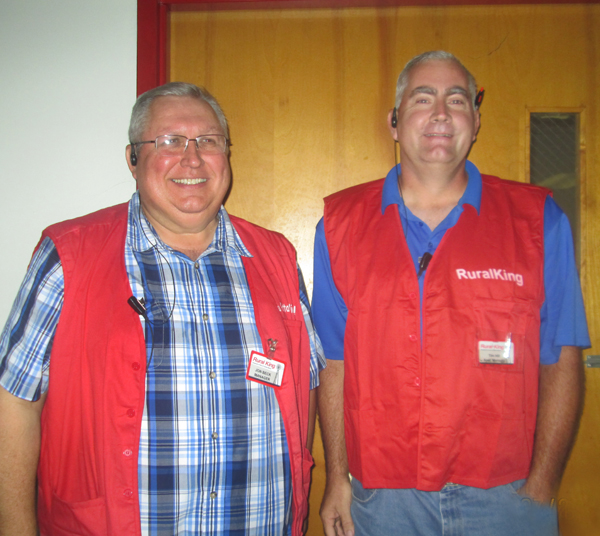