According to the Illinois State Police, James Allen Brown, 78, was driving a Winnebago motor home towing a Fiat passenger car south on Route 51 about a mile north of Shobonier when the Winnebago crossed the centerline and went into the northbound lane shortly before 4:30 p.m.
The state police said that the Winnebago sideswiped a northbound truck driven by Lewis Nelson, 72, of Mulberry Grove, on the grassy east shoulder of the northbound lane. The collision also involved an enclosed trailer filled with hay being pulled by Nelson’s truck.
After the collision, the state police said, the Winnebago continued south and rolled over, coming to rest on its top in the east ditch of Route 51.
Brown was extricated from the vehicle by the Vandalia Volunteer Fire Department and treated at the scene by emergency medical personnel, then transported to Fayette County Hospital, where he was pronounced dead by Fayette County Coroner Bruce Bowen at 5:58 p.m.
Bowen said that an autopsy was to be performed at HSHS St. Anthony’s Memorial Hospital in Effingham. The results of the autopsy were not available at press time.
Brown’s wife, Carol A. Brown, 68, was taken to FCH for treatment, as were Nelson and Una Nelson, 69.
The Browns were traveling with their two dogs, who were reported missing after the accident. Bowen reported late Sunday evening that both dogs had been found, due to assistance from residents in the area.
The state police and coroner’s office are continuing to investigate the accident. 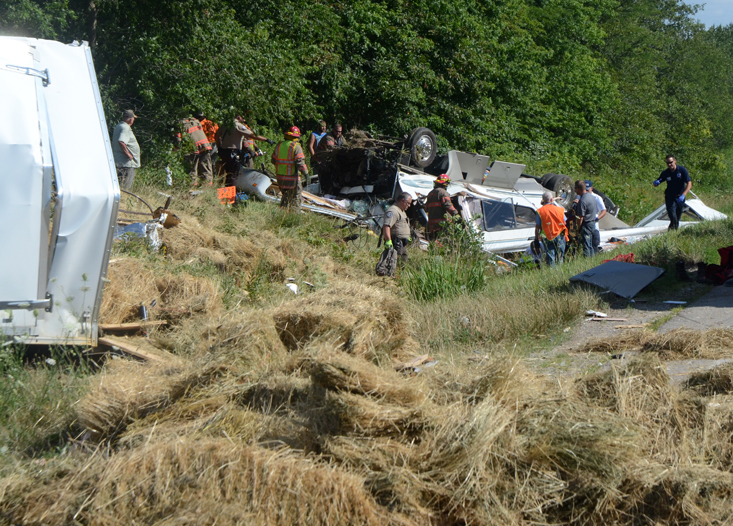 A Dixon man died from injuries sustained in a two-vehicle accident late Friday afternoon on U.S. Route 51 south of Vandalia.