Residents of Brookstone Estates in Vandalia have long enjoyed the grassy, enclosed courtyard in the center of the circular arrangement of living quarters, like a sheltered atrium, but easily accessible to all residents and in full view of the Brookstone staff.

Some residents recently decided to add even more beauty to the area and joined their gardening knowledge, experience, and green thumbs to plan, plant, and create, not only a flower garden of beauty, but also one of edible vegetables, for all to enjoy.
Carlos Biellier, well-known for not only his artistic abilities, but also for his gardening successes, came up with the idea, and was joined by Brookstone residents and friends Barbara Smail and Margaret Carroll to pool their gardening skills and knowledge to provide even more beauty (and healthy foods)  for their fellow residents.
The Courtyard Friends
When Carlos Biellier, who has lived at Brookstone for three years, envisioned the project, the administrator, Shelly Dothager, told him to go ahead and do whatever he wanted to do. She knew from his past experience that Carlos had a gift for creating beauty in their courtyard.
Barbara Smail and Margaret Carroll, who have lived at Brookstone for over two years, joined Carlos.  They added their knowledge, love of flowers and green thumbs to Carlos’ expertise, and the three began their work on the flower and vegetable gardening project.
The three quickly pointed out that they had the help and cooperation of Dothager and Merle Adermann of the Brookstone staff and several other residents who contributed helpful advice, such as the tip of putting a mixture of epsom salts and water on the plants to help them grow.
Their fellow residents named them the “Courtyard Friends.” Several of them have flowers, humming bird feeders and other decorative yard objects at their doors, which open out onto the courtyard.
The three credit one another. Carlos said, “Barb is the professional and also takes care of the indoor plants and Margaret takes care of the enclosure.”
The women said that Carlos plans, gets the seeds and plants, and takes good care of the plants.
The flathead cabbages in the garden are huge and, the circular garden holds a variety of vegetables, including onions, cabbage, egg plant, peppers and tomatoes in the very center, surrounded with a border of  blooming flowers.
The residents are welcome to pick the vegetables for their own use. One resident said that she “ had some of Carol’s onions on a salad last night for supper.”
“Courtyard Friends”
Carlos always had a very large garden before he moved to Brookstone. His late wife, Rowena (whom many knew as Mrs. Claus) canned and made jelly from the berries in their garden, and gifted others with the tasty homemade treats, especially at Christmas time.
He said he tries to get plants from Alaska. “They have a short growing season in Alaska,” he said.
He estimates the cabbage, which is from the U.S., will yield heads weighing about 20 pounds. The flower garden also has premium geraniums.
Margaret said that she had flower gardens before moving to Brookstone. “I just enjoy doing this for the residents,” she said.
Barb, whose parents were farmers, said, “I just enjoy pretty flowers and making things pretty.”
They share the chores. Carlos waters the plants early every morning, and Margaret and Barb take care of the evening watering.
The Courtyard Friends …
…were quick to give credit to others for helping make the courtyard beautiful. Richard Knebel tilled the plot and Aderman assisted them in any way they needed. Nutriments for the soil were brought in to them and others have contributed flowers
Carlos said that First Methodist Church donated flowers, and Sue Thoman brought a daisy plant. And several of the individual doorways that open out on the courtyard are decorated by residents.
And the “Courtyard Residents”…
… include three box turtles, who have been named Carlos, Margaret, and Barb. As the courtyard seems inaccessible by creatures from the outside, it seemed a mystery how they entered the sheltered   enclosure.
The ladies said, “Carlos brought them in. One had been hit by a lawnmower and Carlos brought it into the courtyard to recuperate, and it followed him in and out,” they said. “Rosemary Case puts out a bowl of water out by her door for the turtles.”
Joyce Kwedras has not only flowers, but also a tomato plant at her door. Lucy Cothern has flowers, a hummingbird feeder and a birdbath at her entrance.
Vandalia’s Brookstone Courtyard Recognized
Dothager said that she and the staff appreciate the work and beauty to the courtyard. “There are at least 11other Brookstones and one year, Vandalia’s was named the “Prettiest Courtyard.”
It should also be noted that healthy vegetables are also raised, to the delight of those who had gardens before moving to Brookstone. What better therapy than to watch a garden grow, bloom and yield beauty and healthy food.
“Coffee in the Courtyard”…
… an open house for the public, will be held at 8 a.m. on Thursday, June 25.
Coffee, juice and doughnuts and fresh fruit will be served to the public in the secluded courtyard. Tables and chairs will be set up – what better way to start your morning than to enjoy the beauty of nature … and the planning and work by the “Courtyard Friends?” 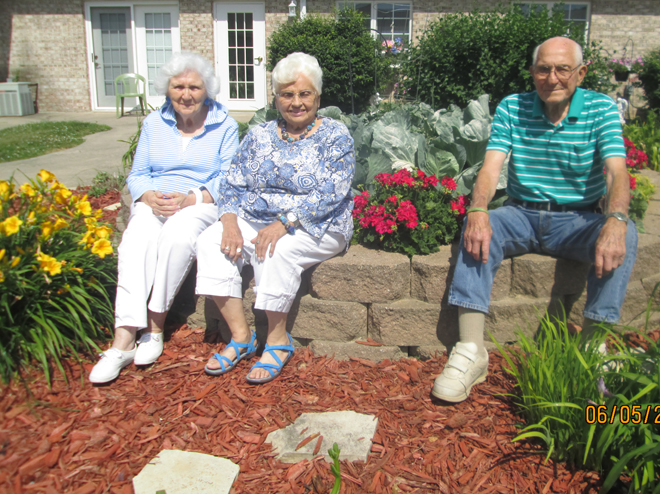